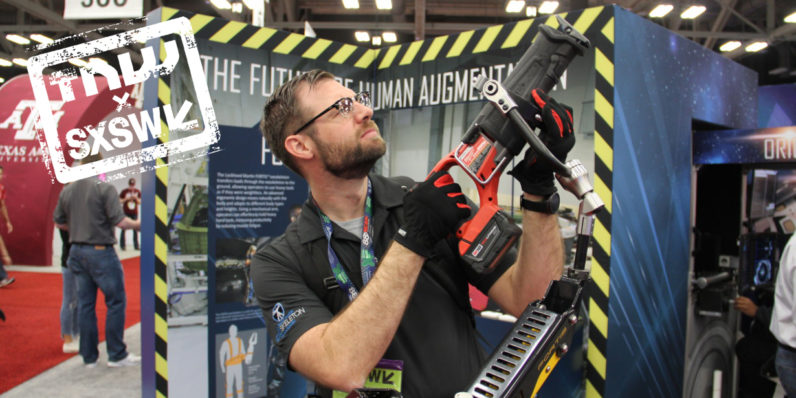 The SXSW trade show floor was so filled with wonderful and weird products, companies and services, it made it hard to select what to check out. A fact that doesn’t make that selection easier, is that tech companies have the tendency of selecting names that make no sense at all and don’t say anything about what they do.

So we set ourselves a challenge. Could we, as seasoned tech journalists, guess what startups do based only on their name? And better yet, can normal humans beings decipher the uncrackable code of startup names? We set out to find out. Spoiler: everyone was really bad at guessing.

What does Officer Vick think it is?

“Hm… Does it tell you what your IQ is? Like an online IQ test?”

We were definitely spot on that it’s not a sexy toy. So, half credit?

So, WTF does Thinktiv do?

“We, invent and transform companies.”

First, it’s probably the best startup name I’ve ever heard, so props on that. DubDub… hmmm… Is it a way to add crazy stickers or special effects to videos, maybe? Or, perhaps some kind of silly Instagram add-on?

What does Rachael think it is?
I work in advertising so i would say dubs in shipping for adding uh, you know, post video effects to a tv spot or something like that. a startup probably wouldn’t be needed for that though.

We both nailed the video portion of it. I’ll have to give the nod to Rachael, though, as her answer was much closer than mine.

So, WTF does dubdub do?

Moxtra is a little ambiguous. It really could be anything from a drone to an on-demand cocaine delivery service. I’m not sure.

What did Jade think it was?

Can’t lie, I was really hoping for the on-demand cocaine delivery service… you know, for a friend. I think it’s safe to say we both failed miserably at trying to figure out what Moxtra does.

So, WTF does Moxtra do?

Some kind of corporate communication software, or something to interact with customers. “Voice of the mob” or something like that.

What did Lani think it was?

“Something you could use to order an assassination on someone.”

We weren’t, but we kind of wished Lani was, because we definitely haven’t seen that at SXSW.

So, WTF does Mobvoi do?

“Mobvoi is an AI company that has developed its own Chinese voice recognition, natural language processing, and vertical search technology in-house.”

What did we think it is?

We cheated a little with this one, since Bryan already wrote about Snaphash. While the name might sound a little obvious, we wanted to see how far people went with it.

What did Kiri think it was?

“Sounds like some kind of weed-growing app. Or no, hash browns on the go!”

We think both of Kiri’s guesses should have been accurate, considering someone who uses the weed service might need the hash brown service.

So, WTF does Snaphash do?

“Snaphash is the first-ever comprehensive grow guide for craft and large scale marijuana growers.” Needless to say, Kiri regretted changing her answer. Also, we asked a couple of other people just for fun, and they universally guessed that the app had something to do with weed.

What did we think it was?

An initial mispronunciation led us to think it was called “Oriso,” which we thought was something to do with Mexican food.

What did Dylan think it was?

“Some kind of leasing equipment company.”

In short, no. In long, we were both so far off that calling it “Oriso” was probably closer to the mark than our guesses.

So, WTF does Oliso do?

“Oliso makes innovative household appliances that simplify your life.” I don’t blame Dylan for the confusion, because that’s about the last thing we would have guessed too.

What does Matt think Bevi does?

Bevi sounds like startup that distributes alcoholic drinks or something. It’s pretty non-descript so it’s hard to tell, but I have no idea.

So, WTF does Bevi do?

The future of dinner with kids. You know how kids always spill their shit all over the place? KID’S PLATES is a smart plate on a robotic arm, connected to a camera that recognizes upcoming spills and moves the plate to catch the stuff.

“I’m gonna go with weight training kits for kids. Like weight plates for kids. That or dining ware.”

Were any of us right?

Not even close. Or actually, no fucking clue.

So, WTF does KID’S PLATES do?

“KID’S PLATES has a belief that VR,AR is a new environment, it can be used in everyday life.Majority of people still limited and hard to imagine those VR, AR technology would give huge impact to our daily life,like a internet did.

We’re going to present a game app which combines VR,AR and real world all together.We have developed a game app as a method to easily experience our vision.We’ll do some demo on the streets in Austin!

And also we’ll bring one solution for 360 production.The dolly360, a radio controlled camera dolly that is ideal for the 360° filming used for shooting VR. Create an intense experience for a more immersive VR film.”

An intelligent training tool for parents-to-be. The baby is soft but sturdy, so you can drop it and not break it, but can practice not dropping your upcoming child. It berates you softly when you do drop it.

Were any of us right?

We couldn’t have been further off, tbh.

So, WTF does Kushi Baby do?

This article was written by Bryan Clark, Rachel Kaser and Alejandro Tauber.

Read next: Microsoft releases Teams worldwide to take on Slack