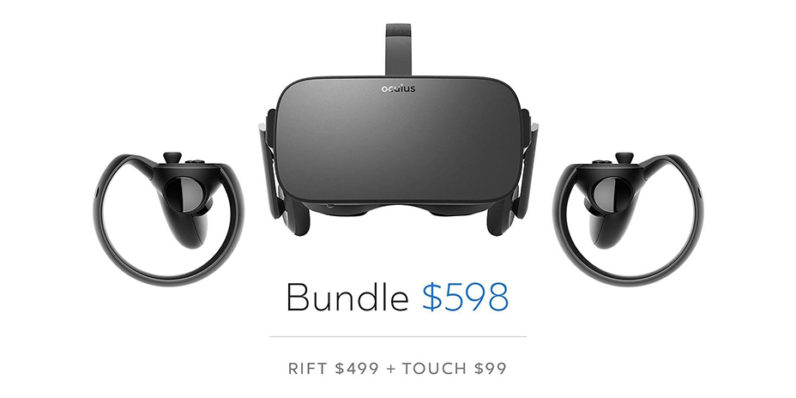 Gaming in VR has a bit of a barrier to entry. Nestled between the phone-based headsets and the high-end experiences is the PlayStation VR, but that’s still $399 plus the PlayStation itself. For Oculus or HTC you’re looking at $800-plus and a high-end gaming rig that should set you back at least a grand. Oculus today narrowed the margin, if only slightly.

The company today announced a price drop on its Rift headset with Touch controllers. The bundle will now sell for $598, down from the $798 retail price it’s typically listed at. If you already have Rift, you can grab touch for just $99 — although you’ll have to splurge for the $58 sensor to map its movements.

“Oculus’ mission is to drive VR to the mass market,” says Jason Rubin, Oculus’ VP of content. “There are two fundamental things we need to push on to do that.” The first, he noted, was to create better great content. Check. A $250 million investment in content should bear fruit for years to come. It’s sorely lacking now, though, when the company might need it the most to create awareness.

The second is to make the technology cheaper. “This is how technology moves forward,” Rubin said. “Prices drop so more people can afford it.” And check number two. A $200 savings after (just shy of) a year in existence is definitely moving the price in the right direction.

Of course, you’ll still have to splurge for a spec’d out gaming rig to use the headset. But hey, you just saved $200 to get you started.

Introducing Rift + Touch for $598—Plus ‘Robo Recall’ Is Now Available! on Oculus