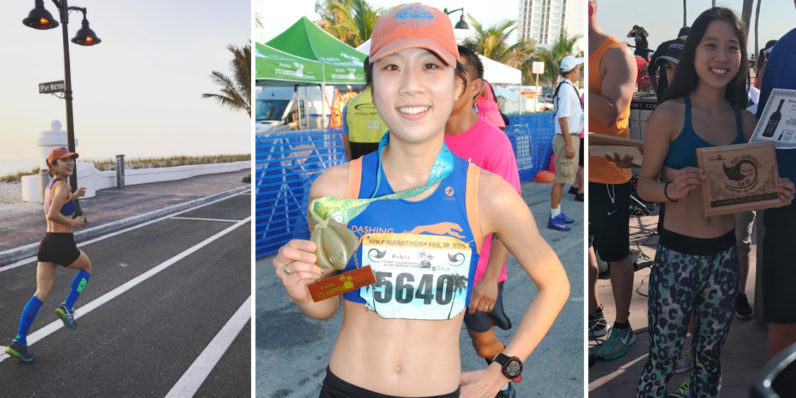 In what could have been a softcore episode of the CSI franchise, a marathon runner was caught in an epically failed attempt to cover up her wrongdoings after cheating in a race last weekend. Her mistake? Wearing a fitness tracker.

Following her runner-up finish in the Fort Lauderdale A1A Half Marathon, New York food critic Jane Seo was busted for cutting corners during the race and then shamelessly doctoring tracking data to back up her phony finish time. The cheater has since admitted the violation in a now-deleted Instagram post.

The malpractice was brought to light by independent marathon investigator Derek Murphy, who exposed her deceptive efforts in a hard-hitting report posted on his blog. The piece in question provides an elaborate analysis of Seo’s running times supported by data collected from her Garmin 235 fitness band.

In the days since the marathon, Seo logged in her performance stats from the Fort Lauderdale Marathon, but as some users were quick to notice, the entry was filled in manually and lacked any GPS data.

Following some comments, she eventually submitted another entry to popular fitness app Strava, showing she did indeed cover the distance. This is when Murphy began to suspect something might be up.

While the second entry almost perfectly matched the original finish time, Murphy discovered it didn’t coincide with the time of the marathon – it was completed later in the afternoon, hours after the race had already ended.

This led the investigator to compare the suspicious entry with Seo’s earlier running stats. As Murphy already suspected, the cadence data was more consistent with an activity like cycling – not running.

This is when the crafty investigator noticed that you could see Seo’s stats on her Garmin 235 device in some of the post-marathon photos.

Upon closer visual analysis, Murphy was able to confirm the runner did indeed cut between one and one and a half miles of distance to finish in second.

Despite her unabashed fakery, Seo decided against coming clean and went on to proudly accept her runner-up award. She even pro-actively approached the marathon officials to offer “evidence” she completed the race fair and square – even though nobody had made any allegations of wrongdoing at that time.

As Murphy notes, Seo came forward only after she became aware of “the extent of the evidence against her.”

Head to this page to read Murphy’s full report. If you’re looking for some inspiration to pick up running, Seo has penned a heartfelt piece on the Huffington Post about how she ‘learned to love running‘ – that ought to give you some genuine motivation.

And in case you do decide to cheat on your local amateur marathon events, better take a lesson from the Reverend Al Bundy:

Read next: Microsoft's new AI sucks at coding as much as the typical Stack Overflow user