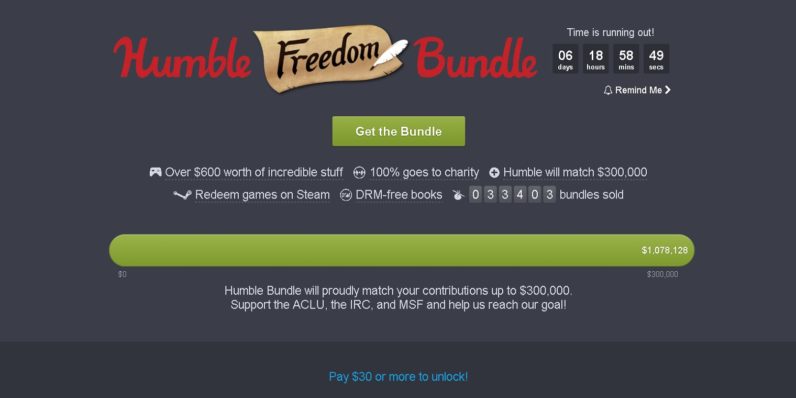 Humble Bundle — arguably the best value in gaming — is now even better. Its newest offering, the Humble Freedom Bundle, pledges 100-percent of the sale’s proceeds to humanitarian charities.

Humble Bundle usually offers a collection of a game keys at a price determined by the purchaser. A portion of the price is given to charity and the rest is given to the developers.

The Freedom Bundle is a little different. Instead of paying whatever you want, the minimum payment is $30, and 100% of the money goes to the charities.

On the Freedom Bundle’s page, Humble says it supports liberty and immigrants’ rights in the US. They chose these three charities with those ideals in mind:

We chose these three organizations because of the inspiring work they do in providing humanitarian assistance to refugees and displaced people as well as in defense of justice, human rights, and civil rights.

The Freedom Bundle will be available for the rest of this week. Humble Bundle says it’ll match the donations up to $300,000, their initial goal. At the time of this writing, the Freedom Bundle has raised over $1 million.

Read next: PewDiePie dropped by Disney and YouTube over anti-Semitic joke videos [updated]