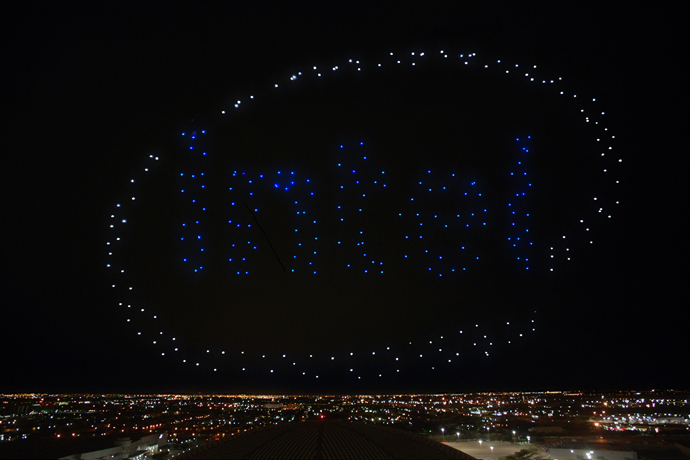 Lady Gaga is… Well… She’s Lady Gaga. She doesn’t need any help putting on a spectacle. All she has to do is put on a dress made entirely of sirloin and sing about how it’s not her fault; she was just born that way.

But at last night’s Super Bowl, she upped the ante. Here’s what you missed:

If you ask me, one of the most interesting parts of her half-time tour-de-force didn’t take place on the stage, but rather a few hundred feet above it. Over 300 drones flew above her, creating an impressive spectacle of light and movement.

The set used Intel’s Shooting Star drones, which weigh just 280 grams, or roughly the same weight as a volleyball. Each drone includes an LED strip which, collectively, can produce up to four billion color combinations. Impressively, all these drones intelligently work in tandem, and were controlled by a single pilot on the ground.

This was the first time drones were used in a half-time show. And thankfully, everything went swimmingly, with no units falling out of the sky onto the unfortunate head of a back-up dancer.

“Lady Gaga and the Super Bowl creative team wanted to pull off something that had never been done before and we were able to combine Intel drone innovation with her artistry to pull off a truly unique experience,” explained Josh Walden, senior vice president and general manager, New Technology Group, Intel.

“The potential for these light show drones is endless and we hope this experience inspires other creatives, artists and innovators to really think about how they can incorporate drone technology in new ways that have yet to even be thought of.”

Drones are increasingly used as a medium to record an event, but as the 2017 Super Bowl shows, they can also be part of the action too.

Read next: Discover if your Slack team is stressed out with this clever plugin