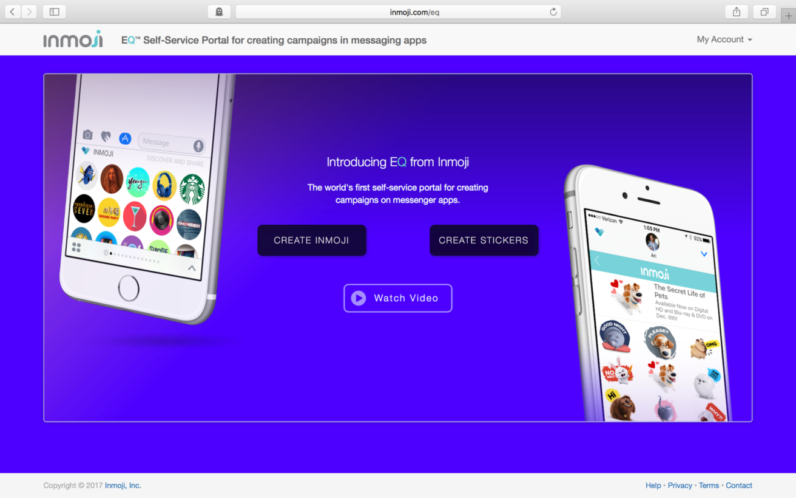 Emoji are weird. They’re more than just a set of cutsey images you stick at the end of a Slack message with your workmates. They’re something substantially more than the emoticons and glyphs of yesteryear. I suppose you could say they are essentially a kind of universal language we all can understand. So, it shouldn’t come as a surprise that someone would try to capitalize on this global phenomenon.

Already, Emoji have been front-and-center in a number of advertising campaigns. Condom manufacturer Durex is no stranger to using them to market their product, or simply to grab attention. But now, emoji themselves are evolving to be adverts. And it’s all thanks to a company you’ve probably never heard of called Inmoji.

Emoji is the medium

Inmoji (a portmanteau of ‘interactive’ and ’emoji’) launched in 2014. Its founder is Michael Africk – a former Disney recording artist who opened for Britney Spears and NSync. From pop music to adtech; it’s a hell of a career move.

But he seems to have stumbled upon a winner. His company offers a platform that lets advertisers create their own clickable advertisement emojis, which can then be seen by an audience of around 42 million people. And unlike many digital advertising platforms, Inmoji is startlingly effective.

So, here’s how it works. The user will see a particular Inmoji through their messenger application of choice. So far, the service is baked-in to Badoo, Tango, ooVoo, and BlackBerry Messenger. Crucially, it’s also available on the hugely popular iMessenger 10, thanks to the free Inmoji ICE extension, which is downloaded separately through the App Store.

When an Inmoji is clicked, it takes the user to a piece of marketing content; it could be a music video, or a trailer, or a coupon. Whatever.

The tech isn’t untested. Several well-known companies have commissioned their own emoji adverts, enjoying great success as a result. Universal used one to promote the DVD release of The Secret Life of Pets. This effort was seen over 17 million times, and clicked an impressive 336,000 times.

Starbucks too has experimented with the platform, and last year commissioned one to promote the frappucino (something that, let’s face it, probably doesn’t need that much promotion). The one piloted by Starbucks was viewed over 10 million times.

In total, over 8 billion Inmoji were seen in 2016, with around 47 million being clicked on.

You can attribute the success of this medium the fact that it’s everything banner advertising isn’t. It’s fun, and benign, and it’s not intrusive.

Now, Inmoji has launched its own self-service platform that allows anyone to create their own clickable emoji adverts.

Through a tool that’s (in spirit, at least) a bit like Google Adwords, anyone can design and distribute their own Inmoji ads to a range of users. With a starting price of $100, it’s actually affordable, and as you’d expect from any advertising platform in 2017, you can target them with laser precision.

Emoji advertising is still a very niche thing. But in just two years, Inmoji has been incredibly successful, offering clients remarkable rates of engagement and clicks. As a result, this looks set to grow in prominence in the years to come.