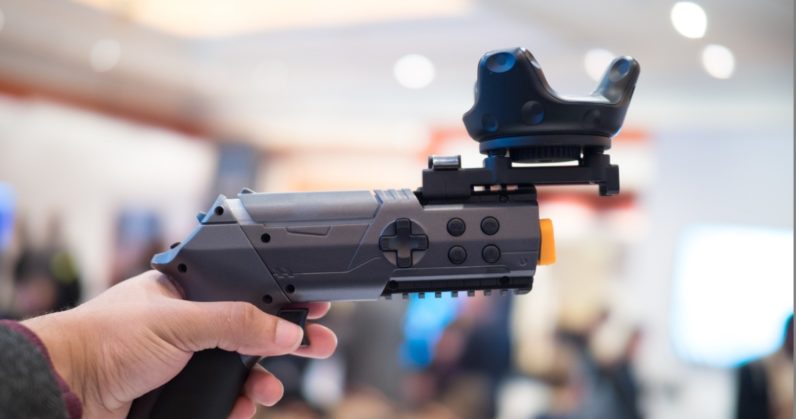 The advent of VR has led to some of the greatest innovations we’ve seen in gaming controllers in years, but problem is they’re still fixed controllers. No matter how good motion and gesture tracking is, they still feel like the same objects in your hand regardless of what game you’re playing.

HTC’s new Vive Tracker, announced today at CES, aims to solve that issue. Using the same motion sensing tech in its controllers and headset, it means developers can basically create a controller of any shape, so long as it can accommodate the tracker on it, and turn it into a VR accessory.

The device – about the size of a misshapen hockey puck – weighs just 8 ounces, and can connect to accessories via USB for button controls and power. It lasts for 6 hours on a charge, and can be mounted via a tripod-like screw at the bottom.

The idea is to build an accessory ecosystem without requiring people purchase exorbitantly expensive controllers every time – your accessories can simply share the tracker.

HTC showed off numerous examples. One was a pair of gloves, one was a handgun another was a full-sized rifle, and yet another was what appeared to be an ordinary basebal bat until you noticed the tracker at the bottom. It’s a bit of an unsightly protrusion, but no one’s going to care when they’re wearing a VR headset.

I’m hoping the tracker is something that really takes off. Great accessories like the NES Zapper or the Guitar Hero guitar provide some of the most unique and memorable gaming experiences; controllers that imitate the objects you’re using in game will lead to a much more immersive experience.

But the applications goes far beyond gaming. In one example, HTC showed off a siumulator called FLAIM (get it?) for training firefighters using an accessory that looked like part of an actual hose. And integrating it is relatively easy – FLAIM’s creators say they were able to code the tracker into its simulation in under four hours.

HTC will make the tracker available to consumers in Q2, with pricing announced at a later date.