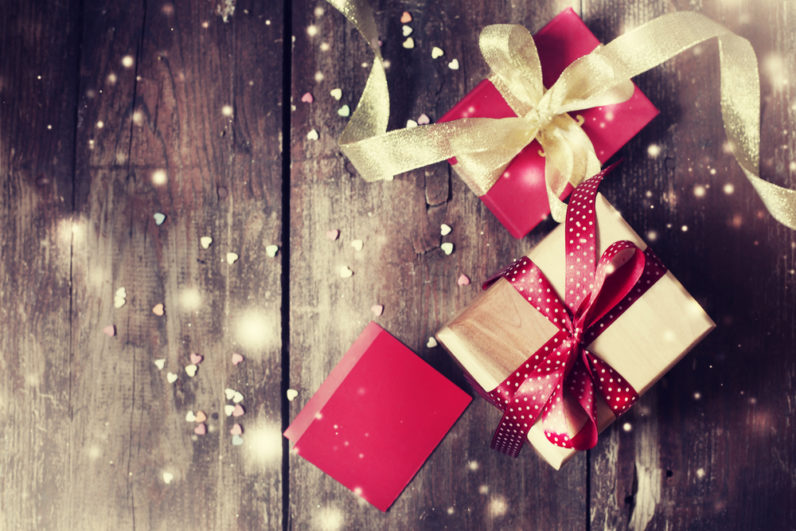 So you want to get a gift for your techie friend or family member, but they seem to have all the standard choices – consoles, phones, games, and you don’t want to get them something they’re never going to use. Or maybe you just want to treat yourself to something over the holidays.

Fret not, as we get to try out a lot of products here at TNW – here are a few ideas for practical gifts that could make someone’s life just a little bit easier or fun.

Fitbit is the biggest name in fitness trackers, and the refreshed Charge 2 hits most of the right notes.

It’s a solid combination of size, price and performance, and this year, it has some legitimate style chops too. While I always thought Fitbits were passable gadgetry to wear because they were fairly inconspicuous, the Charge 2 is something I’m actually pretty happy wearing.

Top that off with long battery life, easy to use software and – finally – the ability to replace your straps, and Fitbit has a winner on its hands.

Nintendo announced the adorable little NES Classic Edition earlier this to an outpouring of nostalgic adulation from gamers around the world. It’s a $60 console packed with 30 NES Classics, a perfect replica of the original controller, and even comes with a video filter that convincingly imitates old CRT TV’s. What’s not too love?

Well, the remote cable is too short, but you can always get a wireless adapter. Good luck finding the console, though.

If you know someone who watches a ton of Netflix, but always streams from their laptop, the Roku Express is a convenient way to upgrade any TV or monitor into a smart unit. With the widest collection of video sources and an intuitive interface, the Roku Express is a steal for 30 bucks. It’s one of few streamers in its price to come with a remote.

If you’re willing to shell out a bit more, at Xiaomi’s Mi Box offers 4K and HDR, along with the full Android TV UI and a voice-controlled remote, for just $69. By comparison, the Chromecast 4K costs the same, but can only be controlled using other devices like your smartphone or laptop.

The Mi Box performs smoothly enough, handles 4k content well, and does just about everything you expect from an Android TV device at a surprisingly low price.

If you want a simple, no-frills microphone for singers, musicians and podcasters, consider the Neat Widget Microphone.

I found it to sound better than staples like the Blue Yeti (fun fact: the Widget was created by one of Blue’s original engineers). This is large part due to its integrated pop filter and shock mount, saving you from having to spend on additional gear for that additional professional touch.

And though it doesn’t include additional features like a headphone jack or multiple recording patterns, it does come in three colorful retro designs.

Know someone with fancy headphones that always plays them out middling sources like their computer’s headphone jack or phone output? Consider Monoprice’s Bluetooth tube DAC and amplifier to do the headphones justice.

It’s clearly too large to take on the go, but looks quite nice planted on a desk with the warm glow of its tubes. Speaking of warmth, the amp manages to add that signature warm sound tube amps provide without becoming too muddy. They pair wonderfully with bright headphones, though they’ll add extra punch to anything you have.

The Bluetooth connectivity is also solid, using the AptX codec that should provide nearly imperceptible compression for almost anything you can through at it. It also makes for a really good external sound card too, if you don’t care about fancy features. I did experience some sound interference with the USB port on some devices, so you may be better off using it in Bluetooth mode or as an amp.

Also be wary that the amp only comes with a 1/4″ headphone jack. You’ll have to get an adapter if you’re connecting a standard 3.5mm headphone.


Amazon’s Fire HD 8 is a terrific bargain of a tablet. If you don’t care about things like imperceptible pixels and top notch cameras. Instead, it offers a durable body with good daylight visibility, decent performance, solid audio, and excellent battery life starting at just $69.

It makes for a more versatile alternative to an e-reader, and though the lack of default access to the Play Store is annoying, it’s not too hard to sideload it if you want a wider selection of Android apps.

Amazon’s Echo Dot is good enough and cheap enough at $40 to practically be an impulse buy. It’s voice recognition works excellently from across a room, and Amazon adds features to its Alexa voice technology practically by the day.

It can do everything from controlling your smart lights to ordering you a pizza, but even if you just want to use it to play music and give you the weather, it adds a layer of convenience when your hands are occupied or don’t feel like pulling out your phone. Plus, it just makes for a cool party trick.

They aren’t quite as seamless as Apple’s AirPods, but they do come with integrated Siri (and Google Now) support, so they serve as a suitable replacement with better sound quality.

For the gamers out there, a custom Xbox One controller is neat personalized option (it also works on Windows 10 via Bluetooth or wired). It’s one of the very best game controllers around, and it’s the only first part controller you can customize so extensively.

You can create thousands of color combinations , and even inscribe some custom text to make it truly unique. While the engraving is normally $10 extra, Microsoft currently has a deal that includes it free.

PC gamers might be better served with a mouse, especially if they play FPS games. Though there a myriad of mice to choose from, the Logitech G403 Prodigy hits pretty much all the marks, available in both wired($69) and wireless ($99) options. It’s comfortable, its body can be used for a variety of grip styles, it has RGB lighting, and the Pixart 3366 sensor is the very best on the market right now.

You might scoff at a wireless gaming mouse, but Logitech is the only company that’s so far gotten wireless to be good enough to really feel just as good as a wired one, in my experience. I’ve used the more expensive G900 for a while now, and the G403 performs just as well, if not better.

For all the hype in the tech world about VR, many people have yet to experience it for themselves. That’s where the Google Cardboard VR Platform comes in to provide cheap VR viewers that can work with virtually any phone.

My favorite of these is the Dodocase SmartVR, which is about the size of an iPhone 5 when folded, instead of the usual bulky VR cases. At $40, there are certainly cheaper Cardboard headsets – including ones made out of, you know, cardboard – but few quite as stylish or portable.

Okay, yes, I realize a phone charger isn’t exactly exciting,  and probably not something you’ll want to gift, but how many times have you had to fight over a charger with friends and family?

Aukey’s dual charger solves that issue. Moreover, it’s a quick charge unit too. From my tests, all my QC3.0-enabled devices seemed to charge just as fast with the Aukey as with their own chargers, and it’s saved me from a few charger skirmishes.

Also in the not-so-exciting-but-really-useful category, external had-drives come very much in handy for freeing up some space from your computer. Western Digital’s My Passport series has been a classic staple for a while now, and this year its hard drives received a vibrant makeover.

Want it to be extra special? Add some with messages of affection or music for a modern-day mixtape.

Mechanical Keyboards have experienced a sort of Renaissance the past few years, as people get tired of flat laptop keys. While there are too many options to go through them all, if you’re looking for a fairly affordable starter mechanical keyboard, the Qisan MagicForce 68 keyboard is an excellent affordable option, ranging from ~$40 to $70, depending on which options you choose. It could help your friend (or yourself) become a faster, more accurate typist.

The keyboard comes in both black and white versions, and has optional backlighting. It also spans a wide variety of keyboard switch types too, which provide different kinds of feel and clickyness.

I’m a fan on the Brown and Blue-type switches, which provide a tactile click (with Blue switches being much more pronounced in feel and volume), but for more on various kinds, check out this great guide on Imgur.

This particular keyboard ditches the NumPad so few of us use for surprisingly compact and minimalist design. It’s missing a function row, but those keys, as well as media shortcuts and others, are accessible using the Fn key combos.

Read next: These are the ugliest tech products of 2016