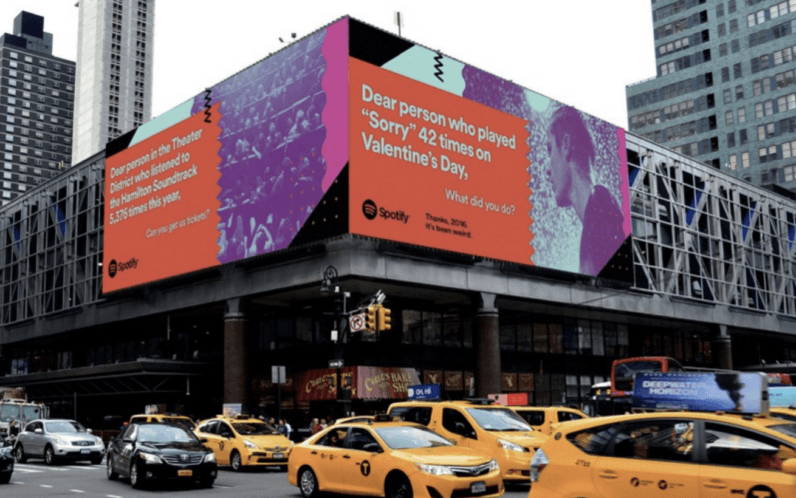 In a hilarious new marketing campaign, Spotify is taking to billboards to pose some rather serious questions (and provide commentary) about its users.

One of the new billboards, for example, will read: “Dear person who made a playlist called: ‘One Night Stand With Jeb Bush Like He’s a Bond Girl in a European Casino.’ We have so many questions.” Another quips: “To the 1,235 guys who loved the “Girls Night” playlist this year, We love you.” Or there’s: “Dear 3,749 people who streamed ‘It’s the End of the World As We Know It’ the day after the Brexit vote, Hang in there.”

Or, you’ve got my favorite: “Dear person who played ‘Sorry’ 42 times on Valentine’s Day, What did you do?”

Spotify CMO Seth Farban told Creativity that the idea was spurred by the interesting insights provided by its users.

There has been some debate about whether big data is muting creativity in marketing, but we have turned that on its head. For us, data inspires and gives an insight into the emotion that people are expressing.

The campaign is Spotify’s largest to date. With 40 million paid users to Apple Music’s 17 million, the word of mouth approach to slow and steady growth seems to be working fine. We’re not sure why the company flicked the switch for a large-scale advertising campaign, but we don’t care, either, as long as Spotify keeps making hilarious billboards.

'Thanks 2016, It's Been Weird,' Says Spotify in Biggest-Ever Global Campaign on Creativity Online