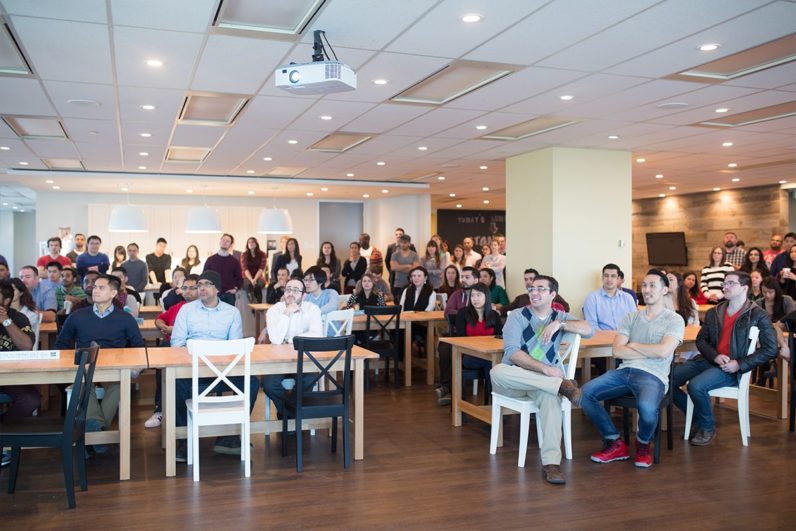 Scaling a company without compromising its culture can be an incredibly challenging problem to solve, but it’s certainly not impossible. One of the keys is building and maintaining a strong, genuine company culture. Through the people you hire and how you structure your teams, you can enable the company to scale effectively.

Airbnb co-founder and CEO Brian Chesky explains the role of culture in scaling:

The stronger the culture, the less corporate process a company needs. When the culture is strong, you can trust everyone to do the right thing. People can be independent and autonomous. They can be entrepreneurial. And if we have a company that is entrepreneurial in spirit, we will be able to take our next “(wo)man on the moon” leap.

Ever notice how families or tribes don’t require much process? That is because there is such a strong trust and culture that it supersedes any process.

Company culture enables effective scaling by keeping precise rules, processes, and red tape to a minimum. Team members know what to do because the culture guides them.

The two most important mechanisms behind scaling and building culture are personal traits and team-based values. Here I will review the strategies that worked for us, but don’t take them as a template. Every company is different.

Whether you’re a founder, leader or manager, it’s ultimately up to you to create unique ways of identifying talent and instilling team-based values. Just because a tactic works for one company or team doesn’t mean it’ll work for yours. Make sure to understand your team thoroughly, to experiment, and to always reinvent.

I co-founded a company called Flipp, and helped grow it from a 10 person team to 275 employees. We recently raised $61 million in funding, and have won several awards for our company culture along the way.

Despite all that, the moment I knew we were getting it right was when I overheard one of our team members saying, “We haven’t hired a single person that I don’t like. They’re all people I would’ve been friends with in real life.”

People make up the bedrock of all companies, their cultures, and teams. Here’s how we went from 10 to 275 team members, and how we plan to go to over 500.

When we recruit, we look for three character traits that we refer to as our 3H system: Humble, Hungry, and Highly intelligent. Candidates we hire have these traits in spades:

Despite the raw strengths of these traits, we know we need to harness them to build a system that maximizes the team’s potential. We actively work to build a team culture that brings out and reinforces these personal traits in each of our team members.

Culture is sustained with team-based values

Humble, hungry, and highly intelligent people contribute positively to our team’s culture, but it would be impossible to maintain them without the guidance of three team-based value pillars, which we uphold in everything we do. We call them our ABC’s:

The magic touch – making people and teams work together

Hunger enables us to identify ambitious team members who can adapt to an ever-changing landscape. One of our company’s values is to always reinvent – to create better solutions to existing problems, or find solutions to new problems.

Ambition makes for great fuel, but is essentially an individual trait. That’s why we balance ambition with being team first. Some ambitious people can be driven solely by personal glory. We’re more interested in people who can, and want to, put the team first.

Team-first ambitious people are driven, but they’re equally interested in making sure the team succeeds. They are accountable to each other — in spite of whatever internal conflict might arise. Being team first is about being open to feedback, and learning from it, for the sake of the team.

We also find that when people are team first, they’re interested in coaching others. Leaders and coaches make for great advisors, but teams unlock their full potential when all members coach each other. We like to work with people who see challenges or setbacks as opportunities to fix mistakes as a team, rather than blaming each other.

Intelligence is essential to our recruiting, because smart people want to work with other smart people. And if they’re really hungry, they actually prefer to work with smarter people to learn as much as possible. This is more conducive to teams that see opportunities in challenges, are willing to coach each other, and see themselves as part of a bigger unit.

We use these team-based values — always reinvent, be team first, and coach others — as the foundation of our culture. They’re constant reference points for how we make decisions regarding culture fit.

With our ABC’s set, we constantly think about our team-based values and how to reinforce them. We know that if we don’t proactively maintain and evolve our culture, it will die. We’ve seen it happen to so many other companies — starting off with great momentum only to hire aggressively, urgently, and carelessly.

Lacking a concrete set of personal and team-level ideals to make decisions on, their culture inadvertently breeds competitiveness, jealousy, and envy. Toxic cultures repel the candidates you most want to attract, and that’s how great companies start to die.

Guide your culture through servant leadership

Obviously, leaders have an important role in implementing team-based values. The most effective leaders commit themselves to the growth of others and putting others’ needs first. they’re interested in enabling each team member to be the best versions of themselves. They remove obstacles and facilitate growth. This is known as servant leadership.

Most importantly, they provide clarity and meaning to team members so the work has meaning and purpose. They have a clear idea of what excellence looks like, and they work hard to enforce this standard.

Stick to the fundamentals

The key to scaling is hiring people with these personal traits, and building team-based value pillars to make the most of those traits. I have no doubt that the specific tactics (around communication, scheduling, and management) may change as we scale. But this iteration and reinvention should be based on the same personal traits and team-based values. They fundamentally remain the same. They are everlasting.

No matter what stage your company is at, you can use the 3H system to help build your team and the ABC’s to maximize your team’s potential. But as your company grows, it’s also important for you to consider your specific industry, your company’s DNA, and what types of people are the best fit for your team, and the kind of culture that would enable your company to excel.