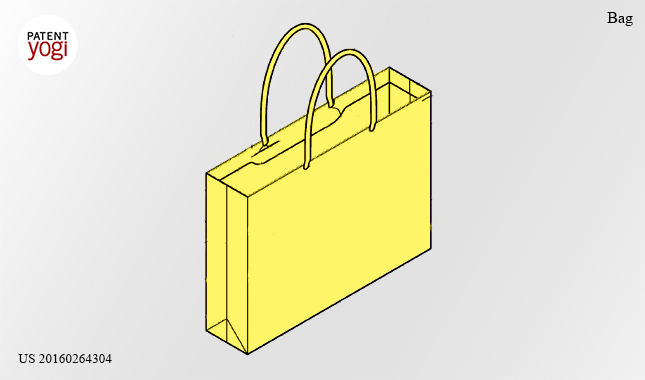 This week, the US patent office issued 6,785 patents.

Each patent adds a little something new to the human knowledge base.
[conf-ad-unit]
As we cannot list all six thousand, the PatentYogi team has selected the five most interesting patents.

Apple places huge focus on designing its products and accessories. The shopping bags are a part of the full Apple experience. No wonder Apple innovated while designing their shopping bags as well. A patent published this week discloses details of these innovations.

Even the bag handle is formed of paper fibers. Typical paper handles are stiff and inflexible; these qualities contribute to a rough, unfinished feel.  Apple’s shopping bag has a handle that has a feel and flexibility similar to that of a hollow textile tube, like a shoelace. To effect this feel and flexibility, the handle is formed of knitted paper fibers in a tight-knit pattern with a large diameter.

This patent shows that Apple is environmentally sensitive organization, but they do not allow it to have a negative impact on their customer experience.

Ford looks to the past to design the future of minimalism

Ford Model A was the first car produced by Ford, beginning production in 1903. The car had a simple design compared to the cars used today.

Cars have evolved from relatively simple designs in the late 1800s and early 1900s to extremely complex and costly transportation devices in industrialized nations. However, tremendous population growth in countries like China and India, and the lack of adequate infrastructure in emerging markets such as Africa, makes transportation using conventional complex vehicles difficult.

Ford believes that there is a need for a simple, ultra-low cost, commuter vehicle that could create a whole new global market, filling the price gap between bicycles and automobiles.

With this goal in mind, Ford has designed a simple four-wheel vehicle that meets the most basic of transportation needs, minimizes weight, and uses the fewest possible numbers of parts. The ultra-light weight also helps in achieving commercial viability of a “zero-emission” electrified vehicle.

The vehicle can also fold into a smaller footprint when parked. This should help consumers use the vehicle in congested mega-cities such as those in China and India. The vehicle uses an X-frame structure. The X-members can pivot at a central axis, allowing the frame to fold.

Moreover, the vehicle can be flexibly configured with minimal change.

Lighting can help great deal to create a theme, mood, or effect during travel. Currently, airplanes have limited lighting options to illuminate a portion of the interior with a desired color.

Boeing now plans to use projectors to project images or videos on ceilings of the airplanes. The images may be a starry sky, northern sky, moon, constellation, or other natural sky scene.

Further, sound may be played along with displaying images, effectively giving a movie like experience to the passengers.

The projector will have the body hidden inside of a structure, such as the curtain header, with only the lens of the projector being visible. The cabin crew will be able to control the operation of the projectors and even select the images to be displayed.

This would certainly make the long distance flights more enjoyable.

Flying roller coasters are variations of roller coasters configured to simulate flight by harnessing passengers in a prone position (e.g., leaning forward for much of the ride).  An example of this is the Superman roller coaster at Six Flags, New Jersey. Riders ride the way Superman flies — face down and head first.

Flying roller coasters are quite uncomfortable for the riders while loading and unloading. The riders sit on the seats in upright position, but then the seats rotate to put the riders in flying position. The process is reversed while unloading.

Disney has designed a flying roller coaster, where the seats to do rotate. The track is perpendicular to the ground while the seats are stationary. This also removes all the extra hardware required to rotate the seats and the associated maintenance costs.

Further, the vertical roller coaster saves space as it will all be stacked on top of itself and not spread horizontally. This stacked arrangement allows families to have a more intimate experience as each group of 2-6 people can enter the ride at a different floor.

Disney is designing a lot of new rides for its new theme parks under development, specifically, the Pandora: World of Avatar and the Star Wars Land.

US Army waging war on Ebola

Ebola is deadly. It has struck humanity before and will strike again.

But this time around, the virus would face the most formidable force on the planet: the US army.

The battle field would be the confines of the human cells. And the ammunition, a patented double stranded RNA molecule (dsRNA) developed by Alnylam Pharmaceuticals in collaboration with the US Army. This powerful weapon is designed to inhibit the virus from expressing genes that are responsible for causing systemic hemorrhage and multi-organ failure in infected subjects.

The dsRNA is designed to have a specific affinity towards an mRNA transcripts of these genes (e.g. VP35) that is encoded by the Ebola virus. When introduced into the cell, the dsRNA targets and degrades these mRNA transcripts. As a result, the genes responsible for the symptoms are prevented from being expressed.

The dsRNA includes two sequences that are complementary to each other. One of the sequences, called an anti-sense strand, is designed to be complementary to the mRNA sequence. This ensures that the dsRNA specifically targets the mRNA transcript and binds to it making it unavailable for expressing the problematic genes. The length of the complementary region on the anti-sense strand is limited to 30 nucleotides. While being effective against the virus, the dsRNA does not reduce either the lymphocyte or the platelet count and neither does it increase the cytokine levels. In other words, the collateral damage of this weapon is almost nil.

Bring it on Ebola!

Read next: Samsung kicks off the Galaxy Note 7 exchange program in the UK