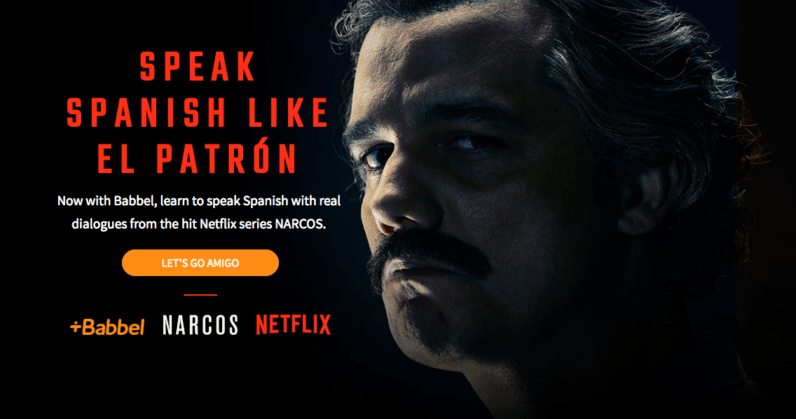 Have you ever found yourself needing to say “Can I have a kilo of cocaine please?” in Spanish and coming up short? Me neither (😉), but language learning site Babbel thinks there’s an untapped market of aspirant bilingual drug runners, and has teamed up with Netflix to launch a Spanish learning course based on the hit show Narcos.

The course uses lines pulled directly from from the show, and will teach you the lingo you need to make it as a coke peddler – from scoring deals, to hiding contraband – all while learning the fundamentals of Spanish.

Babbel has made this a course in “narco-Spanish” (their term, not mine) in six languages – French, German, Italian, Portuguese, and Swedish. It uses images and audio material pulled from the first season of the hit show.

Thomas Holl, founder and President of the Babbel Inc. said:

“The partnership with Netflix lets users engage with Spanish in a uniquely Pablo Escobar way, showing them that learning a new language doesn’t have to feel like sitting in a Colombian prison.”

This course is available in six languages – French, English, German, Italian, Portuguese, and Swedish, and uses images and audio clips from the first season of the hit show. You can check it out for free here.