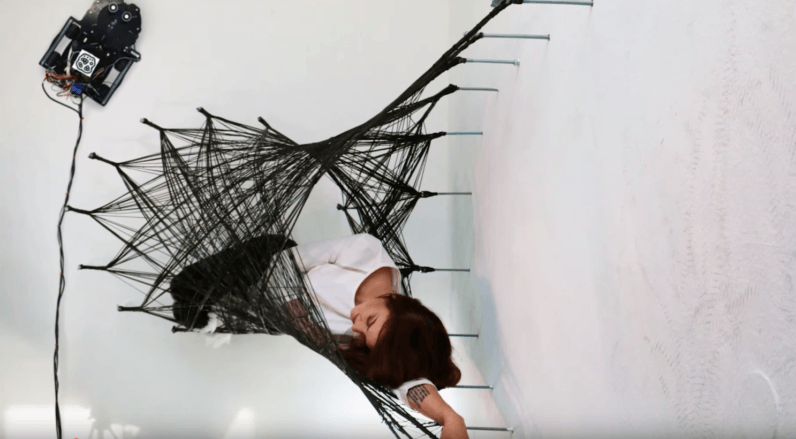 Spiders are creatures capable of producing feelings of both fear and wonder. Presumably, the distinction is how far away from your house they remain. Of course, after seeing these spiders, or ‘spiderbots’ to be exact, that could soon change.

The Mobile Robotic Fabrication System for Filament Structures (try saying that three times fast) was developed at the University of Stuggart’s Institute for Computational Design (ICD). The concept is called ‘swarm construction,’ and is essentially a newfangled way of proving that many hands makes light work. In this case, however, the hands belong to robotic spiders that spin intricate designs using carbon fiber and look like they were designed with a Spirograph.

According to ICD director Achim Menges:

“We are only at the very beginning of exploring the true architectural potential of this fabrication system. But we are convinced that its main advantage is that you can build entirely new structures that would be impossible to materialize otherwise.”

In the video below, you see a team of two spiderbots building what looks like the world’s most comfortable hammock. Of course, the application extends beyond building hammocks, but even that’s enough to make me want one.

After affixing the points on the wall, the spiderbots swing into action by connecting pieces of carbon fiber. The two robots work in tandem, crawling along walls and handing the line back and forth to complete a large and rather complex design. In theory, the swarm construction method could be used to create any number of things, from safety nets to intricate artwork.

For now though, the plan is to increase the number of robots and train them to maneuver over other surfaces — like ceilings, or curved walls.

Read next: People are using Instagram's 'Stories' feature to ask for follows on Snapchat