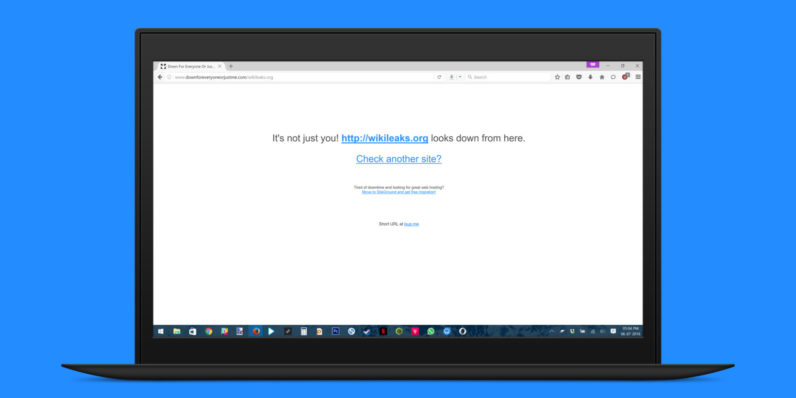 The reason? A spat with Anonymous, the global hacker group that’s been known to take down ISIS social media accounts, publish the names of KKK members and attack a Greek Central Bank’s website to protest the global financial system, which it labeled a “tyrannical institution.”

We’re not usually keen on amplifying internet beefs, but this one affects a major source of once-confidential information that has made a major impact on our world, including a video showing the killing of Iraqi journalists in an American airstrike and secret files concerning the condition of prisoners at Guantanamo Bay.

Last December, when OurMine was a straight-up hacking group (it now labels itself a security firm) that would “we DDoS/hack anyone for no reason”, it took down Wikileaks’ site with a Distributed Denial of Service attack. The method mimics a massive wave of traffic to a targeted site, which crashes its servers temporarily.

.@Our_Mine if you really are the ones firing DDoS attacks against wikileaks, please cease the operation, we are doing important research

Anonymous proceeded to request OurMine to stop compromising the Wikileaks site and then doxxed the group, i.e. published personal information about its members. OurMine claims that the information, which has since been taken down, was incorrect.

More than half a year later, OurMine is out for revenge. Claiming that one of Anonymous’ account holders has continued to abuse the group till today, it took down Wikileaks once again with another DDoS attack and intimated TNW about its actions. We contacted Anonymous but didn’t receive a reply.

It’s worth noting that there are various ways of carrying out a DDoS attack and it isn’t always easy to mitigate them as soon as they occur. However, it appears that Wikileaks is now back online.

It’s hard to take sides in this case, given that the situation seems to have arisen out of a long drawn-out spat between rival hackers. But when a major resource like Wikileaks – which has sought to uncover injustice and wrongdoing by those in power – takes a hit in the crossfire, we all lose.

Read next: Be an astronaut for the day with this live space dashboard