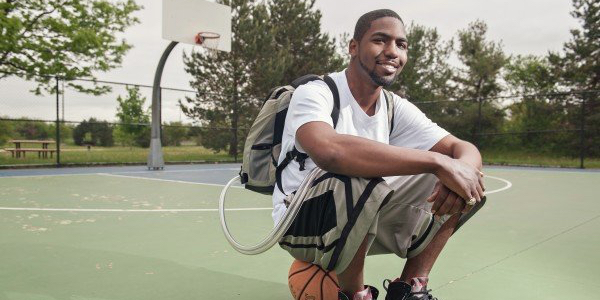 Before Stan Larkin received a new heart via transplant, the 25-year-old “wore” an artificial one in a backpack for 555 day after his actual heart had been removed.

“They were both very, very ill when we first met them in our intensive care units,” said the surgeon behind the transplant, Jonathan Haft, from the University of Michigan Frankel Cardiovascular Centre. “We wanted to get them heart transplants, but we didn’t think we had enough time. There’s just something about their unique anatomic situation where other technology wasn’t going to work.”

Diagnosed with familial cardiomyopathy, a genetic condition that’s known to cause heart failure without warning (and one of the leading causes of death in otherwise healthy athletes), Larkin and his brother, Dominique, were both fitted with artificial hearts after doctors removed the actual organs. The artificial hearts, known as a SynCardia device, were fitted with both brothers who, doctors feared, were running out of time while on the transplant list.

The SynCardia device weighs 13.5 pounds and is connected to the vascular system, pumping oxygenated blood throughout the body.

Dominique used the technology for a few short weeks before finding a donor, but Stan had to wait more than a year. Luckily, Stan thrived on the device and managed to amaze doctors with just how far he was able to push the envelope, even enjoying the occasional game of pickup basketball while lugging around his artificial heart.

Stan received his donor heart in May this year, and has now fully recovered from the procedure.