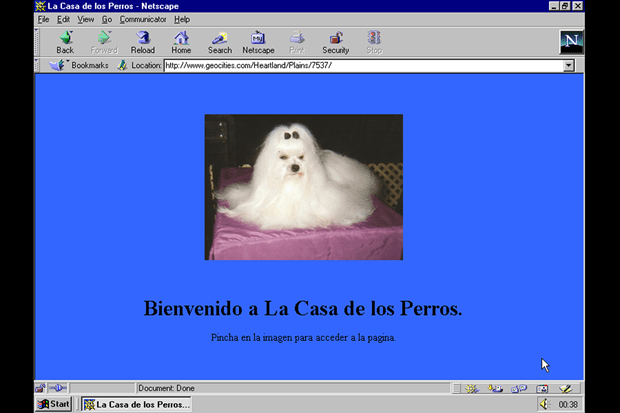 Back in 1993 you weren’t a designer, developer, copywriter or in devops. You were a fucking webmaster, and your name was at the bottom of every page.

Let’s talk about that. Your name was in the footer of every fucking page. The domain might have said tomstrucking.net, but it was built, hosted, and maintained by one person. If you had a question, you emailed [email protected].

And that address got a lot of email:

Folks treated webmasters like god damned magicians. Just email us with your cyberspace dreams, and we’ll make them a reality.

We couldn’t draw, but we harnessed simple design patterns and made them work.
We weren’t engineers, but we could bend a CGI script to our will.
We weren’t writers, but we discovered that words were the core of every page.

In the process of doing all these things, we fell in love.

What did we love? The variety.

People would come to us with a problem and we would figure out a solution. We couldn’t just search the web, because the web was still being written. And you couldn’t just punt a hard question to the engineer in the desk next to you.

Why? Because you were sitting alone in a utility closet packed with floppy disks and old tape drives.This was the 90’s, and webmasters came in all sorts of flavors.

Some were IT people. Others came from the print world. Many worked in academia. There was a group that was more artsy-fartsy (musicians, painters, writers). And there were snot-nosed kids tying up their parents’ landlines with dial-up modems.

Despite our diversity, we had a shared skill: We knew how to make a website. This, as it turns out, is pretty fucking fantastic.

Sure, you could charge someone and build them a website. But even better, you could make your own website. You’d publish whatever you were passionate about: Sporks, whisky, or your hatred of Internet Explorer. Crazy enough: You put that stuff online, and you’d meet other folks who liked the same damn thing. And all you really needed was a text editor (and maybe an FTP client). If webmasters were magicians, than the web was our magic.

Our websites were pretty damned ugly. Instead of worrying about window dressing, we focused on words, hierarchy, and structure. Each new page started in a text editor looking something like this:

Sure, it was simple, but it was focused. No distractions, just: What idea are you trying to express?

We’ve seen lots of cool shit built on the web, but we’ve also seen lots of bullshit too: Barriers to entry, walled gardens, gatekeepers. Some things have been made unnecessarily complex. We need to remember that at its core a web page is simple.That’s the beauty of it. And when you publish your own HTML to a server that you control; that’s fucking powerful. Autonomy and independence are central to the web. We can’t forget that.

The world still needs some fucking webmasters. We might not all be making websites professionally anymore. But we should keep making websites. The passion, the freedom, the joy: We need to pass this on.

Let’s take Tim’s words and inspire a new generation to love a simple HTML page the same way we do.

Read next: Motorola refreshes its budget G handset line with the Moto G4 and G4 Plus