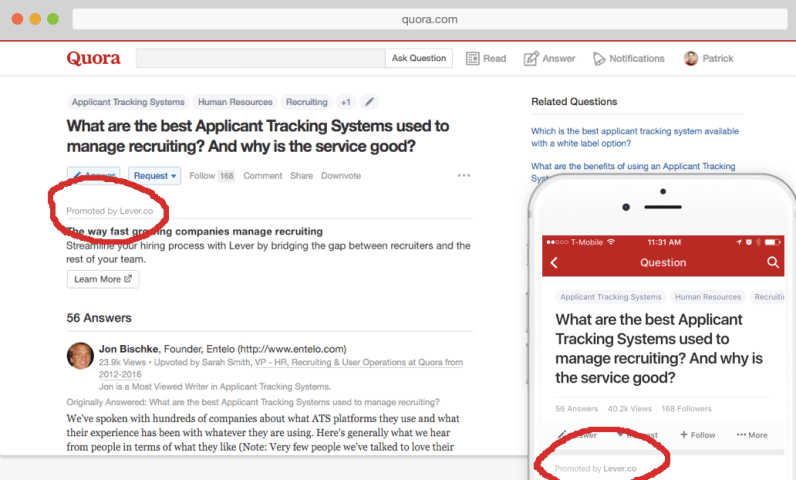 Quora, like fellow Q&A platform Yahoo Answers, really shouldn’t have taken off in the age of Google.

Both managed to build a community of useful and less so answers to big and small questions when a troll could really have ended it all at day one by simply asking: “HAVE YOU GOOGLED IT?”

But having launched in the mid-90s, Yahoo Answers has really had its day and only had about 5.7 million users as of November last year, from a height of around 200 million in 2009.

Quora, though, had only just launched that year and has rather successfully grabbed the baton and run to today where its CEO Adam D’Angelo reports a healthy 100 million monthly visitors.

Now it’s about time the company founded by two former Facebookers started making some money for its investors, who’ve sunk some $140 million into its growth.

As ads go, those launched in beta with acceptable 21st century brands like Lever, Uber, Wealthfront and Sunrun are pretty damn subtle and follow the ‘make it not look like an ad’ rule pioneered by the likes of Buzzfeed.

In Quora’s case, so far the ad content relates to the question being asked and features ‘promoted by’ as the company’s chosen apology for putting an advert under your nose.

We know that, when done carelessly, ads can often be negative for user experience. Nobody likes banner ads, ads from shady companies, or ads that are irrelevant to their needs. However, we are optimistic that we will be able to introduce ads on Quora in a way that will fit in well and ideally make the product better.

That’s unlike its rather haggard older sister Yahoo Answers, which is not only still sporting the company’s rather jarring purple shade across its platform, but also makes use of the rarely-clicked, always irrelevant right-column ad unit.

Quora has become a somewhat unlikely knowledge market for people in Silicon Valley and beyond – helpful and often poignant where Yahoo Answers is typically brash and ill-informed – so I’m going to cut them a break for finally trying to make a few bucks.

Starting an ads beta on Quora via TechCrunch

Read next: This phone charging plant pot is an eco lovers' dream