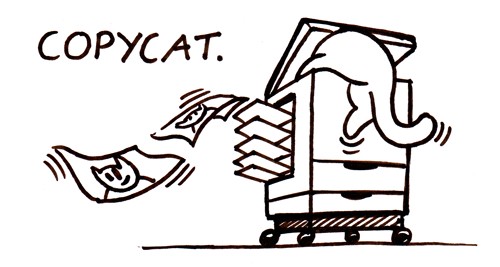 The App Store has a copycat problem. Then again, we’ve known this for years.

It doesn’t help that there’s a thin line between an innovator and a copycat. Before we move forward, let’s explore that thin line and define copycat more clearly.

Author Austin Kleon suggests that real artists steal. Steve Jobs said something similar to this. (“We have always been shameless about stealing great ideas.”)

Artists steal ideas as inspiration. They take something great and either put their own spin on it, or they attempt to improve it in some way. Their goal is to find the best existing product, and then build on top of that or to adapt it for a different use. That’s what we do at Tiny Hearts. We build products based on inspiration from completely different sources (e.g., history, products, styles, app features, nature, etc.).

Copycats don’t do that. They have no desire to improve on the status quo. They don’t find apps to use as references or research. To them, R&D stands for Rip off and Duplicate. They copy core functionality, user interface, and even product names and branding in order to hopefully acquire some users that were meant for another app. They put no effort into innovating, only into trying to capitalize on the fame or a piece of the monetary gains from someone else’s product.

Obviously, my team and I have stolen some really great ideas for our products. We’ve also been ripped off through copycat apps more than a few times and took most of them in stride.

Yet it can be extremely frustrating to put months (years!) of your life into developing a unique product and user interface, only to have it blatantly lifted. If you’re a creative of any sort, but particularly an app maker, here’s why you shouldn’t let copycats bother you and what you can do about them to minimize their potential damage.

There are benefits to copycats

Believe it or not, there’s actually an upside to having copycats.

Sometimes, haters are a sign that you created something that other people love (e.g., Yo, Apple Watch, and the first iPad).

Similarly, copycats are an indication you made something useful or something appealing. That’s the reason why somebody saw it, and tried to capitalize on it. They realized that it could be a hit, something profitable/marketable. They see a shortcut that they can exploit.

In reality, however, most copycats aren’t real threats to your product and your team. See, they haven’t put as much thought into their product as you have. Their copycat app has no blood, sweat, or tears. No soul. Their product might look like yours, but it won’t have the same DNA. Moreover, people who make copycat apps can only live in the past. All they can really do is copy your current version when it’s released to the public.

Even the world’s most innovative companies have resorted to copying. Despite their resources and existing user bases, they couldn’t pull it off successfully. For example, Facebook couldn’t kill Snapchat with Poke or Slingshot.

Alright, so let’s say you leave the copycat app alone, but you notice its latest iteration. And it has crossed the line. Maybe they stole your product name, or perhaps they replicated your branding. Your blood boils. You decide it’s time to take action. I’m with you! It can feel overwhelming and confusing, so here’s what you can do about it.

How to fight back against an aggressive copycat

Before you fight back, you have to cool off a bit.

Wait. Evaluate the situation. Let your temper simmer down. If you decide to take action, do it with a level head. Your time and energy are limited, so think carefully before starting this battle.

Here’s a story of how someone ripped off one of our apps, and what we did about it.

We launched Wake Alarm, a beautiful and intuitive alarm for iPhone in summer 2013, after six months of intense iterative development. The launch went spectacularly well. Wake Alarm went on to become a #1 utility app and hit the top 30 paid overall. Apple featured it prominently on the App Store. It received some glowing reviews from some of our favorite sites like Lifehacker, Fastco, Coolhunting, TUAW, AppAdvice.

From the outset, we designed Wake Alarm to stand out in the loud sea of alarm clock apps. Our goal was to take this old idea that had been around for years (decades!), and to present it to the world in a new way. If you used Wake, you could snooze by flipping your phone, shaking it, or slapping it.

A few months later, I was doing some keyword research when I noticed another alarm clock on the App Store called Wake Alarm Clock. Interesting. I clicked through.

The listing had the same distinctive time (8:24) on their screenshots. These screenshots looked eerily familiar.

Will the real Wake Alarm please stand up?

The developer of this alarm clock, Pedro Fernandes, decided to incorporate our slap, flip, and shake functionality as well. By itself, I would have considered this imitation a form of flattery, similar to how the pulldown to refresh has become common design interaction. Unfortunately, he didn’t end it there. The app description was pretty much a copy and paste job.

So the apps had the same name, the screenshots looked almost identical, and they had a really similar description. I started the infringement dispute process with Apple.

Apple connected us. The developer wasn’t being cooperative, so I didn’t pursue it any further. I didn’t pay too much attention to him, as I noticed his app wasn’t getting much traction. It wasn’t achieving its goal, which was to confuse users into thinking this app was the original Wake Alarm. I started the battle, but didn’t want to waste more time on what seemed like a pointless fight.

Shortly after, I started getting messages from friends about a couple of other apps. One was particularly serious. Our product, Wake Alarm, was only available on the iOS App Store. This copycat app was designed and developed for Android. The Android copycat managed to accumulate over a few million downloads. Unlike the fake Wake Alarm Clock on the App Store, this copycat app managed to fool users into thinking this was an app that we made.

Wake Alarm on the App Store

That’s where I drove my stake in the ground. I decided to act.

My first step was to grab screenshots for evidence.

I also got in touch with a few lawyers to figure out my rights as the creator of the original product.

Then, I got in touch with Google. We’re still in the process of trying to deal with this app, and unfortunately Google was unable to offer us any help. We don’t make many Android apps so it’s not exactly an urgent priority, but it’s still an important problem. (If anyone is reading this from Google, feel free to reach out!)

Unfortunately, the story doesn’t end there. We found out that the previously-mentioned copycat developed more aggressively. Here’s how you can deal with a persistent copycat who’s actually confusing your users.

Talk to them directly

We exchanged emails, and actually did a phone call to talk through the situation. During the conversation, he acknowledged that he was copying us — and misleading people who were looking for our app — so he made a few changes to the name of his app and screenshots. My team and I found the revised versions acceptable, and that was that.

Even today, shortly after the launch of Next Keyboard, we’ve already seen some copycats already cropping up. We’ve had similar issues with our first app Pocket Zoo.

Creators, you’re not powerless. You can talk through the situation.

I don’t like putting people on blast. I love sharing my apps with the world, but I don’t have much fun confronting — or attacking and potentially embarrassing — someone on a public stage.

Unfortunately, sometimes you need to escalate things to this level for people to take action.

For example, Instagram gave away this person’s username to a more famous individual. Their support team didn’t respond until he wrote an article on Medium and it got a lot of attention. Only after that did the Instagram support team immediately resolve the issue, apologize, and give him his account back.

Blatant copying is shameful. Make them feel it by revealing them for the imitators they are. This tactic might cause them to feel guilty or embarrassed about what they did, especially if the community knows about it. Putting someone on blast will not feel good, and it actually gives them a part of your spotlight. Use this technique carefully (and perhaps only as a last resort).

Stay focused on the future

Copycats can be discouraging, but don’t let them paralyze you. Use the copycats to keep you on your toes. You have greater things to worry about. Evolve your product. Think about which parts of your app to refine, and which parts you should expand or innovate upon. Listen to your users. Look to your road map, and not at your rearview mirror. (I stole a part of that from Brian Wong.)

Seeing a product you’ve poured your heart and soul into get completely ripped off is one of the worst things I’ve felt. They say, “Imitation is the sincerest form of flattery,” but it’s actually the laziest way to make a product. Speaking as an optimist, there are some benefits to having your work stolen, but let’s be honest. The negatives definitely outweigh any tangible gain.

Copycats are lazy, obvious, and unacceptable. Yet if you’ve built something useful and unique, you can expect to have some copycats. Stay focused on the future and keep building. Don’t waste your time unless they’re actually confusing your audience or taking attention away from your app. Make sure you’re not unintentionally providing them with exposure.

Even the iPhone is a product of the ideas that came before it. So obviously, creators will keep stealing. So will my team and I. The thin line between art and copycats is one marked by innovation, personality, and improvement. Hopefully, fewer people will resort to copying, and more will turn to actual improvements and original thinking. If more people release original work, the App Store’s ecosystem will grow richer, and creators will get the compensation and rewards they deserve for their work.

Read next: How one entrepreneur bounced back from a failed retail startup to disrupt real estate

Read next: 6 golden rules to learn anything in record time