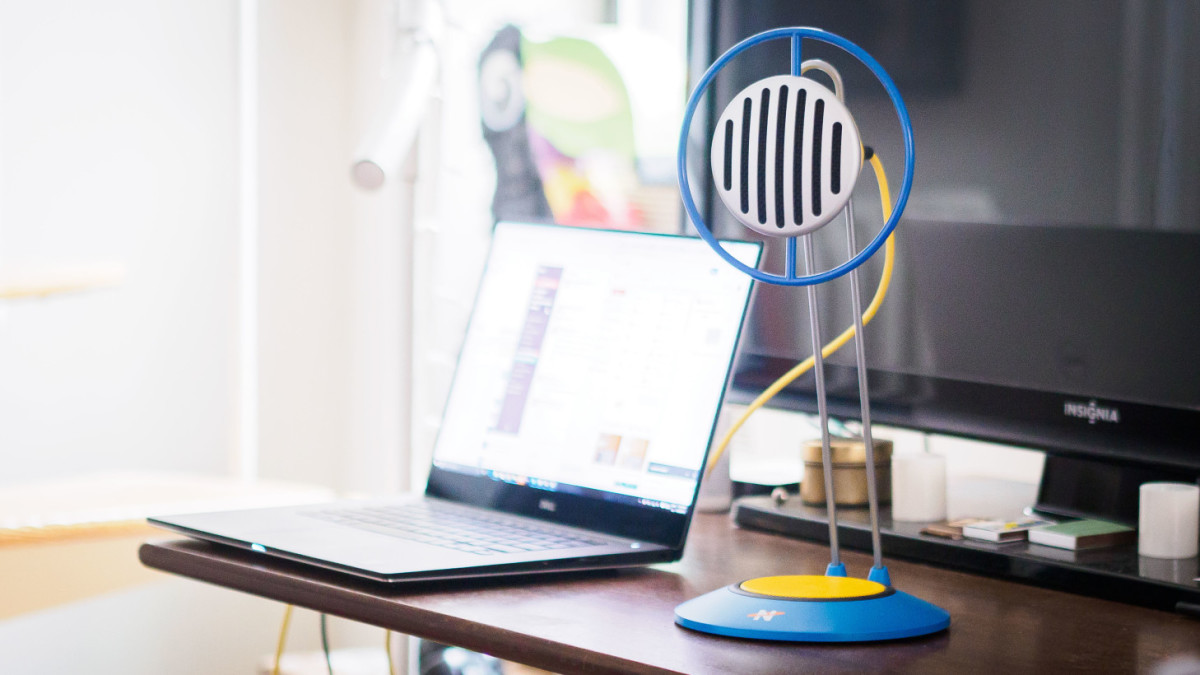 With every passing generation, computers get better displays, processors, speakers, and more.

Microphones though? Not so much.

That means that if you have any interest in documenting anything involving sound – podcasting, vlogging, singing – you’ll need a serious upgrade. And while podcast mics exist aplenty, few are as immediately eye-catching as Neat Microphone’s Widget series, a set of vibrant condenser microphones.

The microphones come in red, green, and blue, each features a totally different shape. All three feature saturated colors and look ridiculously different from everything else out there, and I got my hands on the blue and yellow Widget C. I can see the look being polarizing, but I personally love all three designs.

This is probably where I should mention that these microphones are about more than their quirky looks. It may sound like a newfangled startup with low prospects, but Neat is actually a subset of the Gibson brand (yes, that Gibson) and has some serious audio chops behind it.

Ever heard of Blue? They make some of the most popular plug-and-play microphones around (and have recently delved into headphones a bit too). You may want to consider, then, that Neat was created by Blue’s two co-founders after leaving that company in 2013; these people know how to make a good microphone, and have done so for decades.

Returning to the hardware for a bit, pictures don’t do the microphones’ build quality justice.

In an era where virtually every premium device has to be made from metal and glass, we assume vibrant colors mean plastic construction. That’s not the case here: most of the Widget C is solid aluminum, except for the piece where the stand attaches to the microphone head. It feels like it can stand years of abuse – though it probably not much, considering it’s meant to be stationary on your desk.

Speaking of, the Widget C is larger than you probably expect it to be from the photos. The he base has an of 8.3-inch diameter and it stands at 15.4 inches tall. The size wasn’t an issue for me, but it might be worth noting if you’re limited on desk space.

Though outwardly eccentric, the Widget is functionally very simple. The only control point is a knob that allows you to raise and lower the microphone head, and the only port is for the included USB cable.

That also means you’re not getting any fancy features like different pickup patterns or gain adjustment. Instead, it tries to deliver professional-grade sound all-in-one package, and it comes pretty darn close.

In a word, they sound great. Any external mic sounds better than your average laptop microphone, of course, but the Neat team’s audio heritage comes through in the recordings:

That’s partly because accessories like a removable pop filter and a shock mount are integrated into the microphone itself. If you’re not familiar, most podcast mics tend to suffer from ‘pop’ sounds if not fitted with a filter, but the integrated one here meant that wasn’t a concern unless I spoke from about an inch or less away. Meanwhile, the stand did a decent job of dampening out any thumps from moving things on my desk or typing away on my keyboard while recording.

They’re not quite as good as high-end equipment, but being built-in means the average user won’t need to spend extra cash to get the professional sound they’re looking for or waste time adjusting the microphone’s placement just right. As someone who’s spent hours adjusting microphones to get them to sound ‘just right,’ it’s a relief to be ready to record with little-to-no fiddling.

Spec-wise, Neat uses custom condenser capsule with a standard cardoid pickup pattern, meaning it best records whatever’s directly in front of it, is okay with sounds to its sides and ignores things directly behind it. The microphone samples at 96 kHz at 24 bits, which probably higher than anyone buying this will ever need, but also better than some popular competition like the Blue Yeti or Snowball.

It particularly shined for vocals – spoken or sung – which seems to be its primary intended use any way. It has a very low noise floor (AKA silent moments don’t sound grainy), and speech is full-bodied; there’s none of that tinny sound you expect from your laptop’s mic. In fact, bass frequencies might be a little more emphasized than I prefer, but depending on your tastes, that’s not necessarily a bad thing.

It also fared very well while recording some sloppy guitar-playing. It’s not ideal for recording instruments at studio quality due to its large form factor, but for acoustic or casual music recordings for your YouTube videos, it will sound just fine.

That said, as much as I appreciate the high quality, no frills functionality, the lack of a headphone jack to laglessly monitor your recording as it happens is a big bummer for something this size.

They sound better than they look

Neat’s eccentric design tastes somewhat belie its microphones’ strong fundamentals. While it may not get you all the features competitors in the price range offer – and I still mourn the lack of a headphone jack – if you want an affordable microphone that will help you make professional-sounding recordings out of the box, you can’t go wrong with the Widget. The retro aesthetic is just a neat bonus.