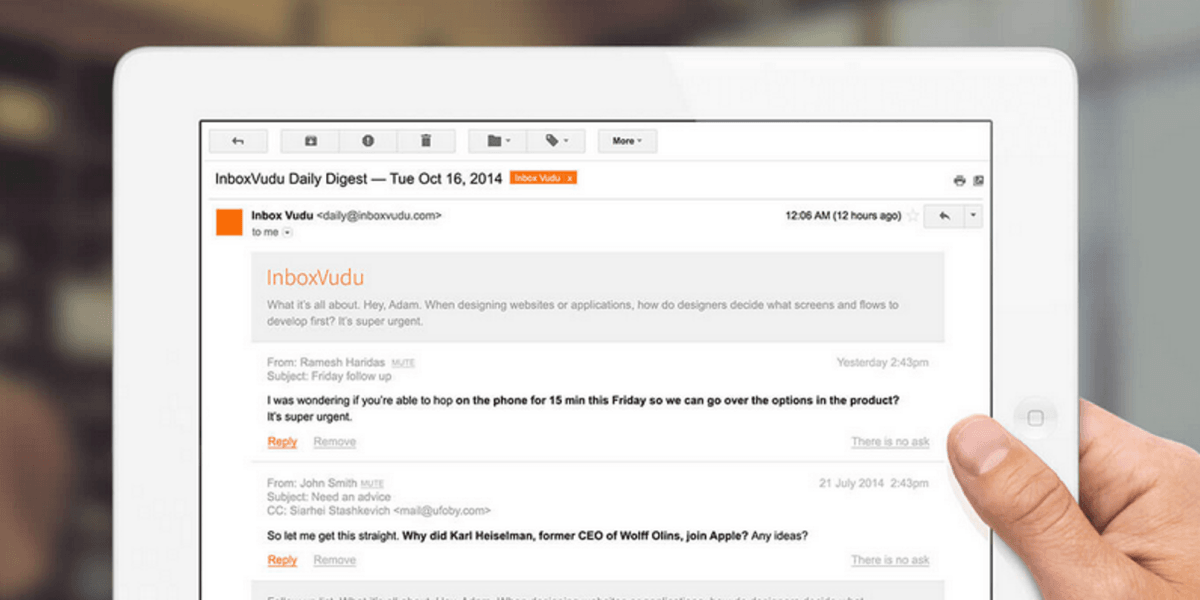 InboxVudu, a service from Parakweet that promised to clean up your inbox by bundling up your most important emails into one daily digest that’s easy to work your way through, is closing.

The theory behind the service was that a single email containing a sort of ‘to-do’ list of emails would be an easier way to triage your inbox – and the company was by no means alone in this sort of bundling approach to email.Unroll.me and My Blend’s both offer a similar service and are looking to make a mark.

However, despite delivering a native iOS app and a Chrome extension, the company decided yesterday to shutter the service. It’s also closing its BookVibe recommendation service.

“When we started building Natural Language Processing(NLP) technology at Parakweet more than five years ago we believed that this technology would have a huge impact on consumers’ lives in the years ahead. We built products to help people discover new book recommendations from amidst the noise of Twitter (BookVibe), to show people where their friends were attending events, travelling to new places or posting about new restaurants and food (IntentPulse).

And, just over a year ago, we launched our most impressive product yet – InboxVudu – to act as a personal assistant, automatically adding reminders of emails you needed to reply to or follow up on to a virtual To Do list.”

Parakweet added that as the NLP technology has been adopted by more companies, there are now more opportunities and areas to focus on, which means winding down its existing services.

“We believe our team can now make a greater impact with our skills on other projects. With that in mind, we will be shutting down our BookVibe and InboxVudu products on February 29, 2016 in order to focus on these new projects.”

While it’s great that the team will continue to launch new products, I’m inferring from its closure that not enough people used the service as a regular part of their email routine.

I know that first-hand: I signed up, then almost never looked at my most ‘important’ email roundups. I’m probably not the only one either, and it’s people like me that sign up but never actually use the service that give the company the potential for hope long after it should have faded.

Huge numbers of sign-ups and downloads doesn’t necessarily translate into huge numbers of daily users – and that last figure is worth a whole lot more to investors than the first one.

I’ve asked the company for more specific info about the wind-down and what it has planned for the future but I’m yet to receive a response. I’ll update here if I do.

Read next: SoundCloud brings its Pulse app for artists to iOS