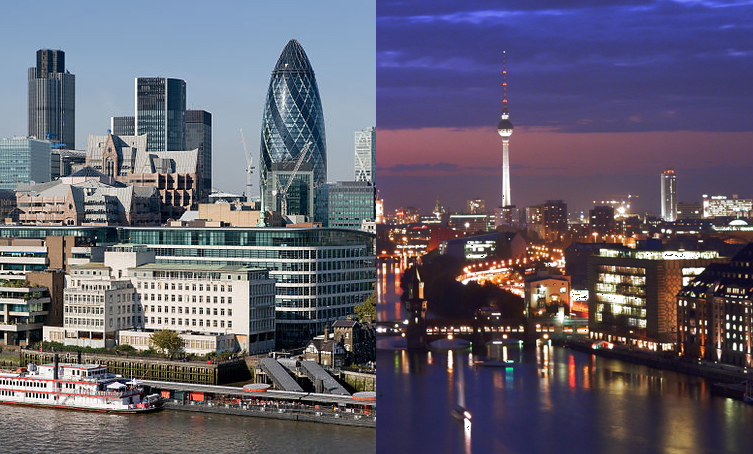 Comparing two cities’ startup scenes is difficult. A number of companies use various methods and combinations of metrics to produce an answer as to which city or region or country is beating out the other. All of them, admittedly, do a fantastic job trying to assess certain metrics, but inherently miss out on other potentially influential factors.

Still, assessing which of two cities should be deemed the best of a certain region can actually be a major deal for companies looking to set up headquarters or subsidiaries in new markets. Two of the fastest emerging capitals for the global startup economy are London and Berlin. They are getting attention for different reasons, but arguably they are competing to be the tech capital of Western (or all of?) Europe.

Between 2013 and the first three financial quarters of 2014, London outpaced Berlin 187-145 for VC investments in startups (German), though that obscures (or preludes) gains for the German city. Both cities recently made headlines with outreach to the Israeli startup ecosystem — a country whose number of startups per capita far exceeds any other in the world. They were both ranked in the Top 10 of Compass’ annual Global Startup Ecosystem Ranking (London sixth, Berlin ninth). Each city has a public-private partnership organization: Tech City UK and Berlin Partner. Of the 332 European tech acquisitions in 2014 overall, Germans acquired 40 of those companies and Britons 33.

While the UK is starting to get its hands back on to the local industry after establishing virtual dominance over European startups, suggesting that it could restrict Tier 1 entrepreneur visas for startups in the next few months, Germany is loosening its grip by offering help to Israeli startups in Berlin (and perhaps more countries soon) and preparing new tax incentives for early-stage startup investments.

Some of the numbers used to compare the cities are relevant to the UK and Germany as a whole, but these cities are not just the political capitals of their countries.

UK tax benefits are also strong. There is an R&D tax credit for companies with fewer than 500 employees worth 225 percent what it was in previous years. The Patent Box Scheme lowers the corporation tax on profits to 10 percent on development of IP, the Seed Enterprise Investment Scheme (SEIS) provides 50 percent income tax relief for UK taxpayers on the first £100,000 of seed funding to a company, and the Enterprise Investment Scheme (EIS) offers 30 percent income tax relief for private investors and venture capital trusts alike.

The German capital has received a lot more attention after Germany dominated venture capital investments in 2014 and early 2015. German tech companies nationwide raised $1.15 billion in Q1 2015 alone in 58 deals, with $1.6 billion for the entire first half of 2015 according to CB Insights. DLA Piper cites that more than half of the Q1 deals were in Berlin itself: The city comprises 40 percent of all VC investments and 55 percent of investment values since the beginning of 2012 through Q2 2015, with more than three billion in 316 deals according to CB Insights.

“Berlin’s trigger was back-to-back large exits. People took notice. While the growth cycle is similar for all startup ecosystems, for London and NY as huge business centers, it’s easier to grow,” CFO Jean-Francois Gauthier of Compass told Geektime. “But Berlin has a low cost of living, lots of artists and creative-type moved in, then startups moved into a great fun place to be. They suddenly started attracting the best people.”

Some of the biggest companies are Delivery Hero, Foodpanda, Soundcloud, Wooga, ResearchGate, and HelloFresh.

Those numbers have continued to rise, but they are hampered by the fact that most of that money is going into later stage companies, which the Ministry of Finance announced in September would change dramatically. Tax exemptions on venture capital would begin in 2016 to companies which receive the government’s so-called INVEST grants for early stage companies, according to the German Ministry of Finance.

City Initiatives for Technology, Innovation and Entrepreneurship (CITIE) claims that the city offers various kinds offinancial packages for startups worth €4,500 through its public-private tech promoting organization, Berlin Partner for Business and Technology. “Berlin provides extensive soft landing support for businesses seeking to start out, operate and expand in the city, allowing them to test out the city for a few months at minimal cost,” CITIE’s report reads.

German nationwide innovation in real terms is evident by the number of patents residents filed over the last two years: 63,173 in 2013 rising to 65,958 in 2014 according to the DPMA. This makes it fifth in the world for patents per capita, according to Bloomberg‘s 2015 country innovation index, placing it ahead of the UK’s seventh.

Read next: Even Adobe is dropping Flash from its own products