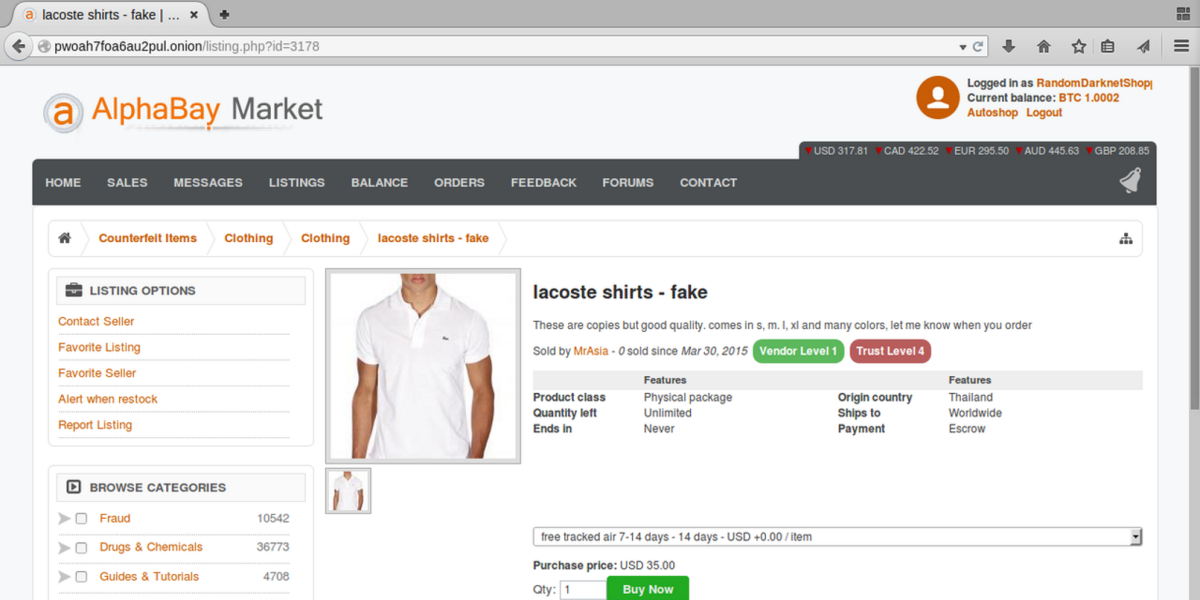 A laptop running a bot that makes automated purchases from the ‘darknet’ has just made its first since being released by the police for buying ecstasy online.

The laptop/bot combo are part of an art installation looking to explore the deep Web and all its previous purchases – with the exception of the ecstasy – went on display in the exhibition space alongside the computer.

“The Random Darknet Shopper is a live Mail Art piece, an exploration of the deep Web via the goods traded there. It directly connects the darknet with the gallery. By randomizing its consumerism, the bot is guaranteed a wide selection of goods from the thousands listed on deepweb markets,” Mediengruppe Bitnik says.

Its latest purchase – a fake Lacoste t-shirt from Thailand – cost $35 and will be on show in London (alongside anything else it buys) when the next leg of the exhibition opens on December 11.

First time around, the bot was spending its (roughly) $100 of weekly Bitcoins on items from the darknet marketplace Agora. Since that has now closed, the bot is crawling Alpha Bay instead, described as “currently the largest deepweb market place” by the team.

Pointing the bot at another darknet marketplace means that another package of illegal drugs could potentially turn up at the door. Getting away with it once with the justification of artistic expression is one thing, but continually buying and shipping illegal substances probably isn’t going to be tolerated for very long by the authorities, even if it’s for an exhibition piece.

Presumably, you’re still responsible for the actions of your bot online, even if you didn’t specifically tell it to go and buy you illicit goods.

Read next: NSA stopped from indiscriminately collecting millions of phone records, but it's not enough