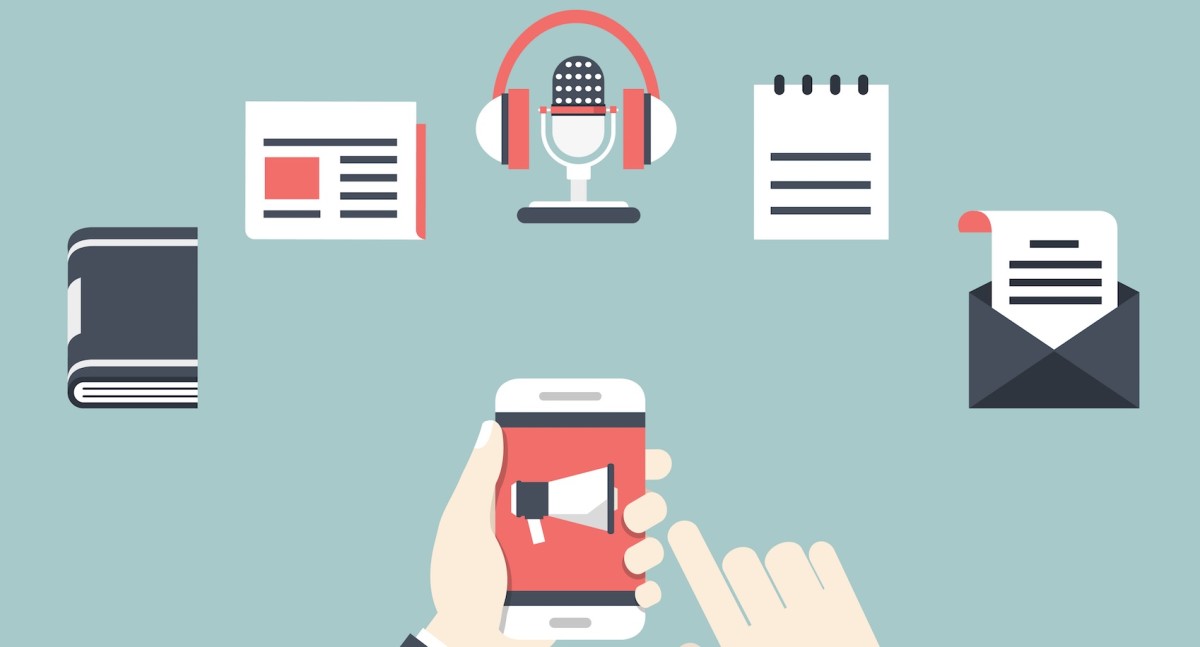 I love podcasting. The reason I love it is because I rarely need to think about it.

But I don’t want any of those things. I just like using podcasting as one piece in my overall brand and marketing strategy. I’ve got other things on my plate. You do too. Too many other things to let one thing take up all our time and energy.

Like I said at the start though, this is why I love podcasting, because it doesn’t require a ton of time to do.

First, let me break down how both my shows work.

The first podcast is one I co host with Jason Zook called Invisible Office Hours. We release the show in 12 episode seasons approximately twice a year, so we can focus on it for a short burst, then go off and do other things.

We record once a week for two hours, for six weeks. That gives us 12 shows in the same number of hours. There’s no pre-planning, just a list of topics, which we pick the second before we hit record. We don’t worry about banter (we’ve got that in spades) and we let the conversation go where it needs to go. We do it in a single take, unless there’s a technical problem (like Skype crapping out).

Once we’ve recorded an episode, we ship it off to Podcastmotor who then edits and masters it and puts it on Dropbox for us.

My band did the intro/outro music and a friend of mine (whose name/voice you’d know if you heard it) did the 5s intro, which she recorded on a text message to me. We don’t have ads or sponsors, but we have a short note at the end on how we’re monetizing the season (more on this later in the article).

Then, every Tuesday for 12 weeks we release an episode on iTunes from SoundCloud and send out an email to our newsletter from MailChimp. We also tweet about it from both of our accounts and the @InvisibleOH account (if we remember).

That’s it. Between seasons we don’t think about the podcast past making notes on topics we may want to cover.

This is my solo podcast. There are no seasons and I release at least one episode a week. It’s a short, 10 minutes or less show that starts the second the track starts playing—no intro music, no sponsors, no pre-roll, nothing. Just me saying “hi” and getting into what I’m talking about.

Because it’s just me talking, and that can be scary, I do about 10 minutes of producing before I start recording. I think about the topic I’m going to discuss, make notes, maybe do some research, think up a story or two and bring it back to advice that could apply to all freelancers. Since it’s only 10 minutes, I typically have less than a page of bullets to talk about.

There are no guests either, so I don’t have to schedule anything—I just record whenever I’ve got time, edit it myself, and add on a tiny outro that promotes my course.

For Invisible Office Hours we do video calls on Skype so we can both look longingly into each other eyes, but also, more importantly, look for cues when the other person is going to finish talking.

We record both our audio synced together using Call Recorder, which is a Skype plugin. We also record our local audio using QuickTime.

Those three files (one local audio file each, plus the synced Call Recorder file) is what we give to our engineer.

We record using Rode Podcasters (my favourite mic, after trying several) and always wear headphones so there’s no bleed. Jason typically wears his iPhone earbuds, and since I’m nerdier, I wear my favourite Sony MDR–7506s.

Skype is free, QuickTime is free and Call Recorder is $30. Yes, there are 100 other tools we could use, but this is what we use. It’s quick, easy and gets the job done.

For my solo podcast, since I don’t even need an internet connection, I simply record using Quicktime. I try to get a single take, but if I need to cough or there’s a technical problem, I just start another QuickTime file.

I mix using Garageband, so I can stitch together multiple files if I need to and so I can use the same outro over and over again. I wasn’t taught how to use Garageband, so I just drag the files so there’s no space and tweak the levels a little so I sound clearer. It’s not as great as a pro would do, but it’s quick and cheap.

For both shows we use SoundCloud to host the audio files and generate the RSS feed. We could use libsyn (which is more of the industry standard) but SoundCloud’s got a nicer UI and I’m superficial like that. Plus, SoundCloud is easy and works—and the embed widget looks good on my websites.

To add your file to your podcast as an episode, you drag your file to upload it, enter in the title, description, artwork, tags and it creates the episode. It also adds the episode to its RSS feed, which iTunes then notices a few hours later, and the episode shows up there as well.

Artwork? PSSH. I used an old photo of myself with plain white writing over top of it. You just want something that’s noticeable and easy to read as a tiny image. You could even use Buffer’s Pablo (for a square image).

Sorry to disappoint, but there’s not much more to it than that! I told you it was pretty easy and didn’t take a lot of time.

Think of each podcast episode like a blog post. It’s got a topic, a title, some keywords and a unique URL.

But just like blog posts, your content of your podcast needs to be interesting, valuable and engaging with your specific audience. If it’s not, people won’t want to listen.

A lot of people start podcasts because from the outside they seem like an easy money maker: you make a bunch of them and companies throw bags of money at your face! Hell, John Lee Dumas makes $250k+ A MONTH with his podcast and Pat Flynn does a cool $100k+ A MONTH with his.

In reality though, the people who share that sort of information are typically at the top of their industry. It’s attainable, sure, but it’s not the norm.

The industry standard revenue model is $15–25 CPM (cost per thousand) for a 15–60s sponsorship. So if your podcast is getting ~1000 downloads per episode, and you have one sponsor, you’ll get about 20 bucks an episode. So basically, vegan pizza money.

I’ve never been a fan of “industry standard” though so I prefer disruptive revenue models for what I do. More work? Yes. But it’s creative work, and I like doing it.

We had a regular sponsor for Invisible Office Hours’ first season, and we only agreed to it because they said we could use Star Wars references in the ads we recorded. It was ok and the sponsor was a great company, but we decided against sponsors moving forward.

For season two, we sold a bundle of our existing books and courses called the BUNDLE OF AWESOME (it has to be all caps, because it was that awesome). It brought in $40k+, meaning about $3300 per episode. That’s more than any sane sponsor would pay us using industry standard rates. Plus we had way more fun doing that.

For season three we’re selling (present tense, since it’s not done yet) a one-day workshop using a bumpsale pricing model and it’s made ~$5,000 so far.

While I don’t make any money directly from my own podcast, The Freelancer, it’s there to drive sales and brand awareness for my freelancing course, Creative Class. I ran a discount for the course during the launch of the podcast and it generated $23,508 in course sales.

I’ll be employing similar experiments moving forward with discounts or bonuses via the podcast for the course. This approach will generate more revenue than sponsorships, plus it’s promoting my own product (which I obviously stand behind).

“I don’t have time”
Remember my solo podcast? That’s 30 minutes TOTAL for each episode. I don’t have to worry about scheduling guests or reaching out to new people, it’s just me talking. Quick and easy. No show notes even (I write enough words onto screens). It takes less time than it takes me to write a blog post in fact.

“I don’t know anything about podcasting”
That’s why I wrote this article for you! So this excuse is no longer valid.

“I don’t know how to edit, upload, [lack of nerd-ness excuse]”
Hire Craig at Podcastmotor. Every single nerdy thing you don’t know how to do, he will take care of for you. From mixing/editing to adding your show to iTunes, to artwork, to show notes, to adding the episode to your website. There are other companies and options for this too, but since I use this service and love it, it’s what I recommend.

“I don’t know how to book/interact with guests”
Then don’t. I host two podcasts with no guests. Other podcasts can have guests (I know this because I’m interviewed by other podcasts as a guest at least 10x/month). You can do a solo show. Or a show with a co host. That way there’s no interviewing, scheduling, reaching out, worrying about bad connections, people with shitty (or no) microphones—just you recording.

“I don’t know how to make money with it”
Starting a podcast simply to make money is a shitty reason to start a podcast. Start a podcast because you want to share your voice with the world. Because it’s worth sharing. Audio is you, up close and personal. The world wants to listen if you make it interesting, engaging and informative.

See what I did there? A little industry slang! You’re already a podcasting expert. To summarize this epically long post, here are the key points:

Now get out there and start podcasting.

Read Next: 19 tools to start your podcast from scratch