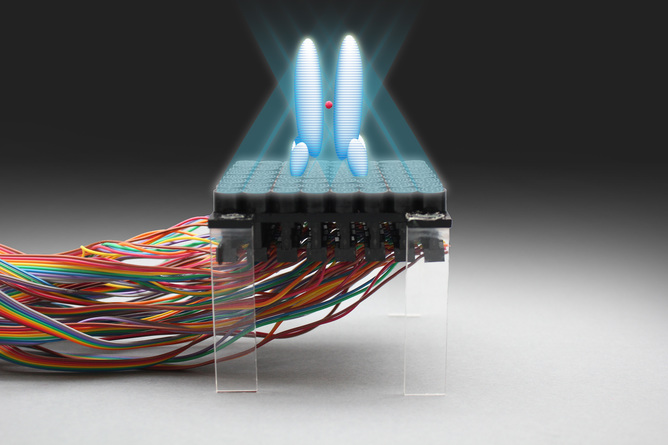 When I think of a tractor beam – a stream of energy that can move objects – I imagine a ray emerging from a spaceship gripping an object outside and pulling it in. In my mind this spaceship is the Starship Enterprise from Star Trek, but the idea has been used in countless science fiction plots. But in the last few decades, the concept has also gathered attention from scientists and engineers.

Despite advances, it has, however, proven difficult to build a tractor beam that can move real-life objects in a controlled way. But in our new study, published in Nature Communications, we show that millimetre-sized objects can be levitated, moved and rotated in mid-air using sound waves. The technique could one day be used in a number of applications ranging from targeted drug delivery to moving delicate or hazardous materials.

The gap between theory and practice

The basic ingredient in any tractor beam is a wave that can transfer a force across a distance to an object. Light, in the form of laser beams, had seemed like the obvious choice. This is possible as light carries momentum and, under certain circumstances, this can be transferred to objects – thereby applying a force.

In 2014 a team from the Australian National University set the optical tractor beam distance record by moving particle an impressive 20cm. However, the particles they moved were microscopic and the laser beam was power hungry. We took a different approach and started to look at using sound waves as potential tractor beams.

Artistic depiction of an alien abduction by Travis Walton.
Crobard/commonswiki

We aren’t the first to think in this way. In 2014 a group from the University of Dundee performed an elegant experiment which conclusively showed that pulling forces, the defining feature of a tractor beam, could exist in sound beams. This created a lot of excitement, but the team never managed to physically hold any objects in the beam.

Initially we didn’t actually set out to make a tractor beam, although I had followed the Dundee work closely and these ideas had been nagging away at me ever since. Working with my colleague Sri Subramanian, we were already using an array of small 40kHz loudspeakers to develop Ultrahaptics technology, which is based on creating a sense of touch in mid-air using waves. To do this we changed the phase of the loudspeakers so that the sound waves arrived in step, constructively interfering to create a strong, focused, acoustic pressure. If this focus is directed at your hand it can be felt and we were using this idea to research a new type of human-computer interactivity.

While this is interesting in its own right, it meant we had an array of speakers capable of creating any sound field we could possibly think of.

And given the number of published papers outlining theoretically how certain acoustic fields could create pulling forces, we assumed that it would be easy to go ahead and create a sonic tractor beam too. But for some reason, nothing seemed to work and we realised that there was a huge gap between theory and experiment. As a computer scientist, Subramanian suggested a different approach – to ask the computer to solve the problem for us.

We knew that acoustic forces could be simulated, so we set our computers to work, running simulation after simulation. Key to this was to describe the conditions for stable levitation – points where the acoustic pressure was low but surrounded by high-intensity sound (too high-pitched for humans to be able to hear it). This led to converging forces that would hold an object in place.

The answer that came back told us how to set the amplitudes and phase delays of the loudspeakers to get the strongest possible trapping effect. And suddenly it worked – the solutions produced by the model caused particles to be suspended against gravity. It was a magical moment when Asier Marzo, the PhD student working on the project, showed this to the rest of the team.

There before our eyes was a real sonic tractor beam, holding 4mm diameter polystyrene balls up against gravity. And when the device was turned upside-down, it still worked. We then looked in detail at the conditions that produced these beams and found that they were not the crazy configurations they at first seemed, but followed three clear patterns – tweezers, twisters and cages.

The tweezer-like beams can be better described as two acoustic fingers that can grip, move and rotate objects. The twisters are acoustic vortices and the objects become trapped in their quiet central cores. The cages, as their name suggests, surround the object with high intensity sound to create a barrier that traps the objects inside.

As it stands, the experiment only works for millimetre-sized objects. That is because the object lifted needs to be smaller than the wavelength of the surrounding sound waves. To lift bigger objects we would need lower frequencies and that would start to bring it into the audible range – an experiment that would be very loud indeed.

Factory of the future?

Once we discovered these patterns we no longer needed the computer and were able to generate the tractor beams much more simply. This is important as it allows real-time movement of the trapping point as well as controlled rotation.
So are sonic tractor beams useful? Yes, is the short answer, but probably not in the way you would imagine.

For starters, our acoustic tractor beams will be confined to applications here on Earth. This is because acoustic waves do not travel through a vacuum so are no good for space. However, there are many industrial applications where containerless processing would be beneficial, for example, handling sensitive or dangerous materials such as pharmaceuticals or explosives. One vision is of a factory of the future in which the products are moved entirely by acoustic forces.

In a different direction, we are already exploring how a multitude of trapped objects could be used to form a new type of 3D display. There are also some very exciting applications at the microscale, where tractor beams could operate within the human body to deliver drugs in a more targeted way or carry out certain small-scale medical procedures.

On the larger scale, science fiction writers have given us a wealth of ideas, such as acoustic hoverboards, but until we develop a time travel machine, we will have to wait to see what the future really holds for sonic tractor beams.

Read Next: Skype’s Star Trek-style translator is now available to all Windows users