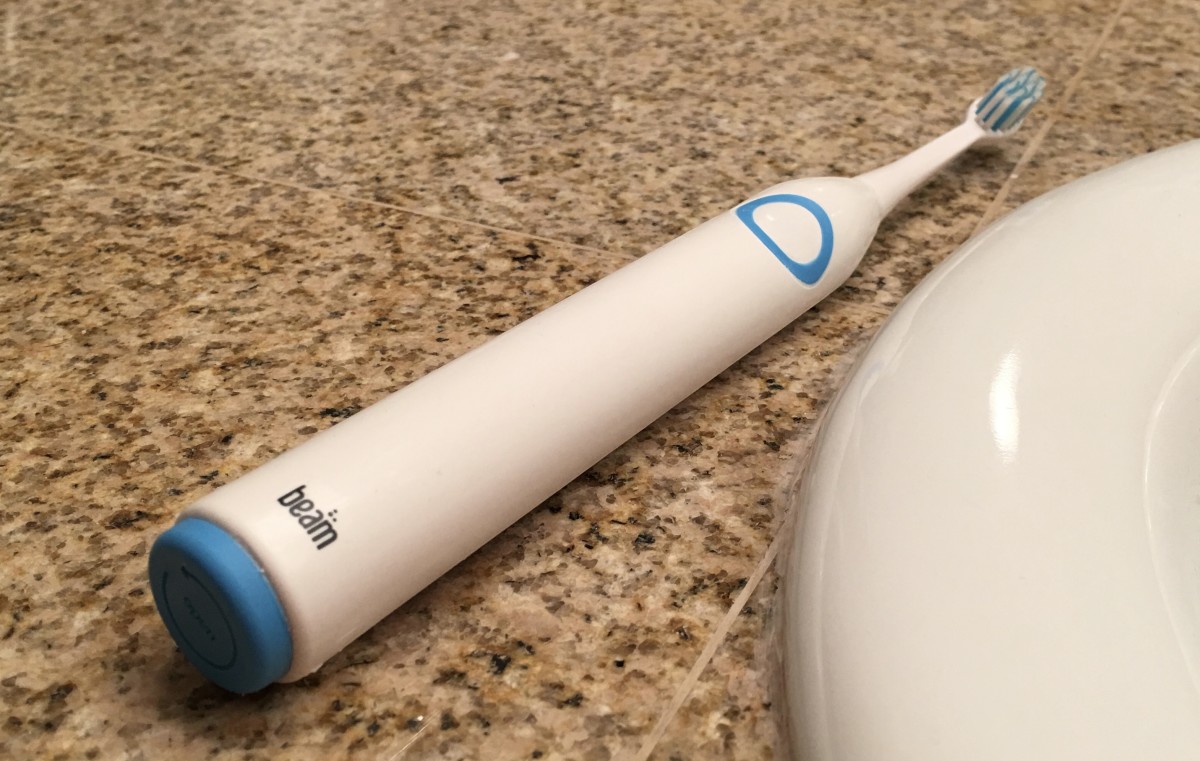 Proper dental care is important, but costly. A startup by the name of Beam thinks it can help provide preventative care for more people with an app and colorful brushes, and it might be onto something.

Beam is a service that helps connect its users with a network of dentists, and provide best practices for care along the way. You can get everything from brushes to floss down, and even schedule dental exams — all via an app.

Right now, Beam says dentists make money via a ‘fee for services’ model, wherein they’re paid by you and/or your insurance company for work they do. Beam’s goal is to offer outcome-based payments to the dentist, who would be rewarded for having patients who are actively engaged in healthy dental care habits via the app. The company tells me it wants to “align the intents” of patients and dentists; less dental work for us, and incentives for dentists who have healthy patients.

To that, the company believes the current dental care model is reactive. Dentists are incentivized by fixing problems rather than preventing them. Beam is changing that, and tells me it wants to give dentists more for encouraging and promoting preventative care.

Beam isn’t just a clever business model, though. In addition to providing its own device (more on that in a second), Beam is also an insurance broker, with services provided through Renaissance. Depending on your region, Beam costs anywhere from $15 to $55 per month (which also gets you the brush, floss and toothpaste), and works with over 100,000 dentists nationwide. It sells individual as well as plans for businesses.

As a broker, Beam says its model is beneficial for insurers it works with, as well as more traditional dental insurance brokers. Insurance companies can use Beam as a direct broker to consumers, while existing brokers can offer Beam as a package to companies. Beam makes a percentage of the fees paid for coverage.

The crux of Beam is its app, where you can do everything from find a dentist to order toothbrush heads. It’s also where you can sign up for an insurance plan.

As you brush, you earn stars. Those stars act like rewards points, where Beam says it may give you anything from Amazon gift cards to discounts on insurance premiums. 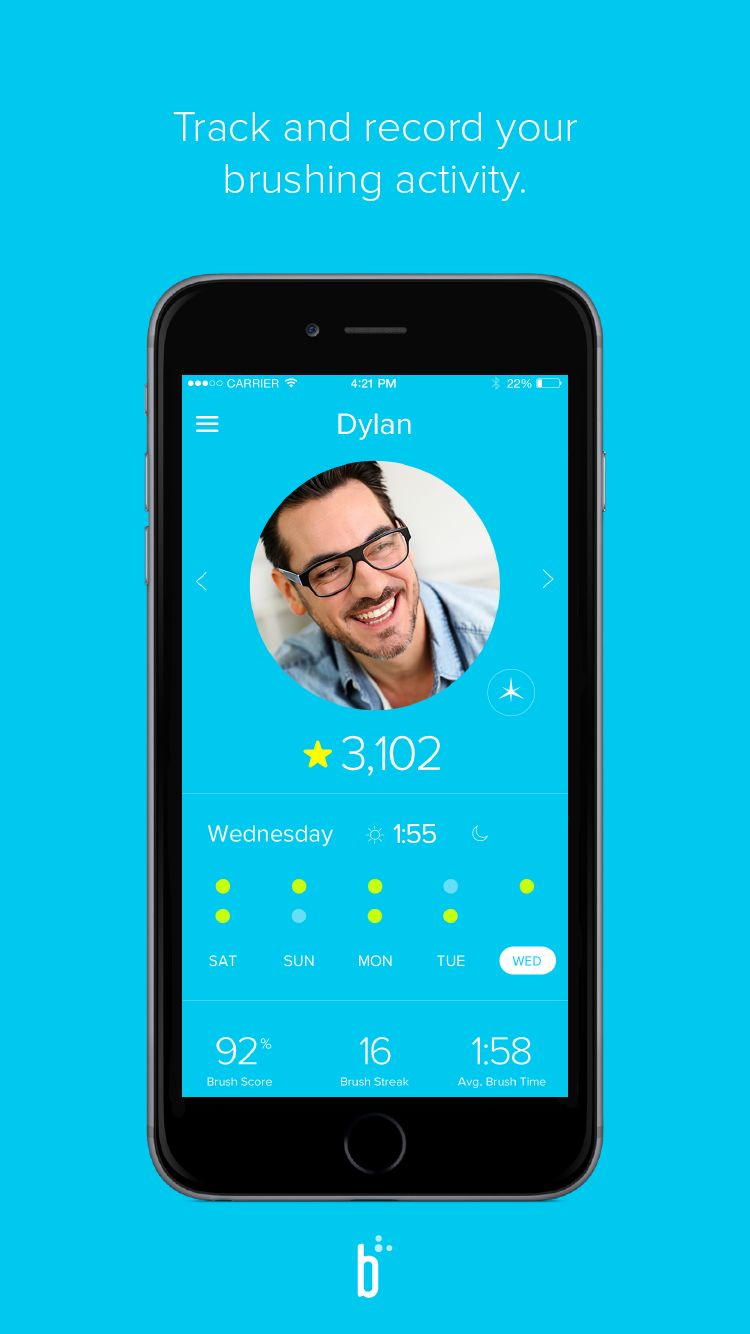 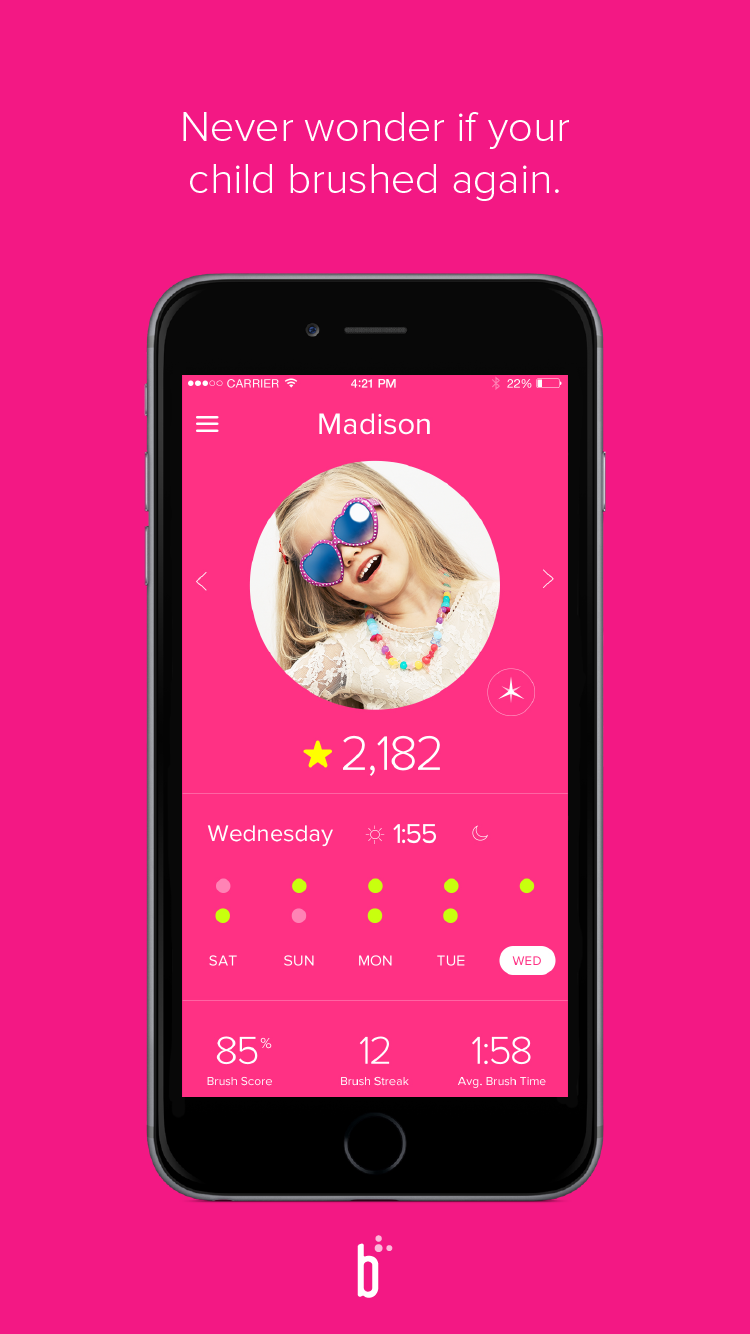 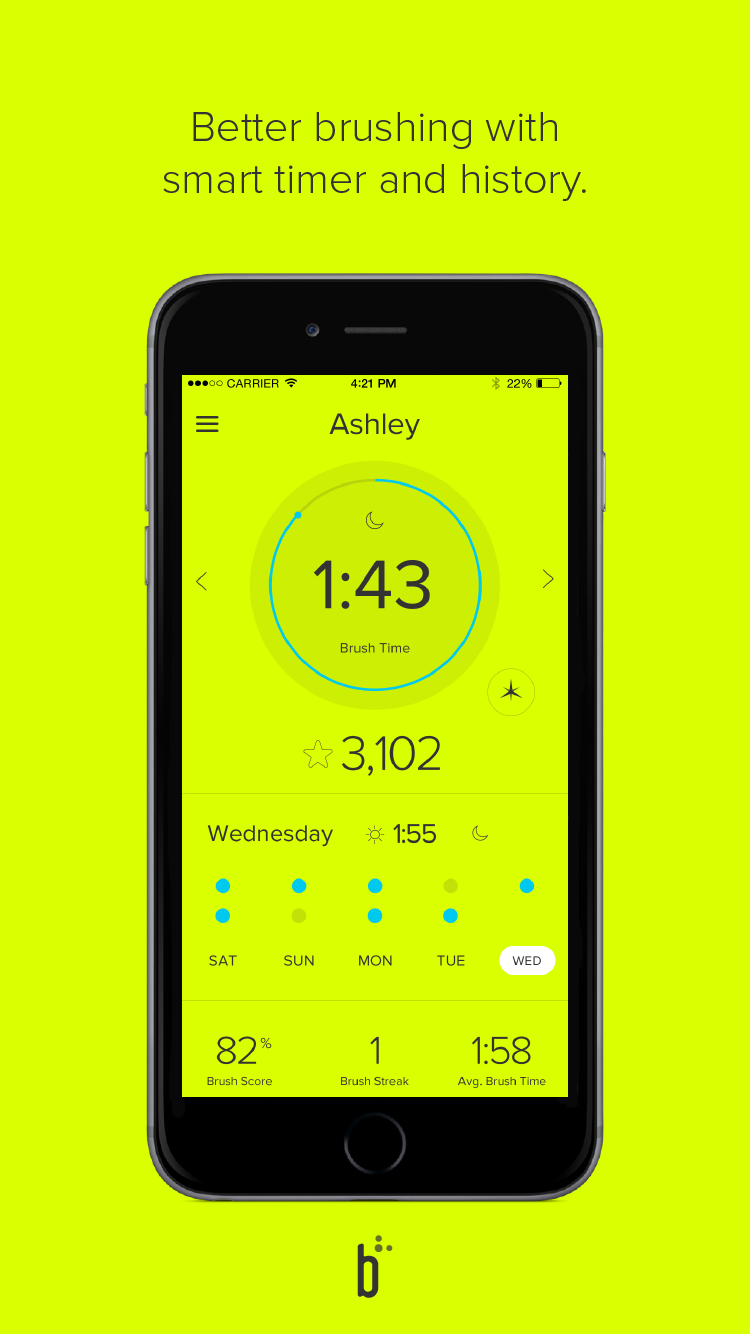 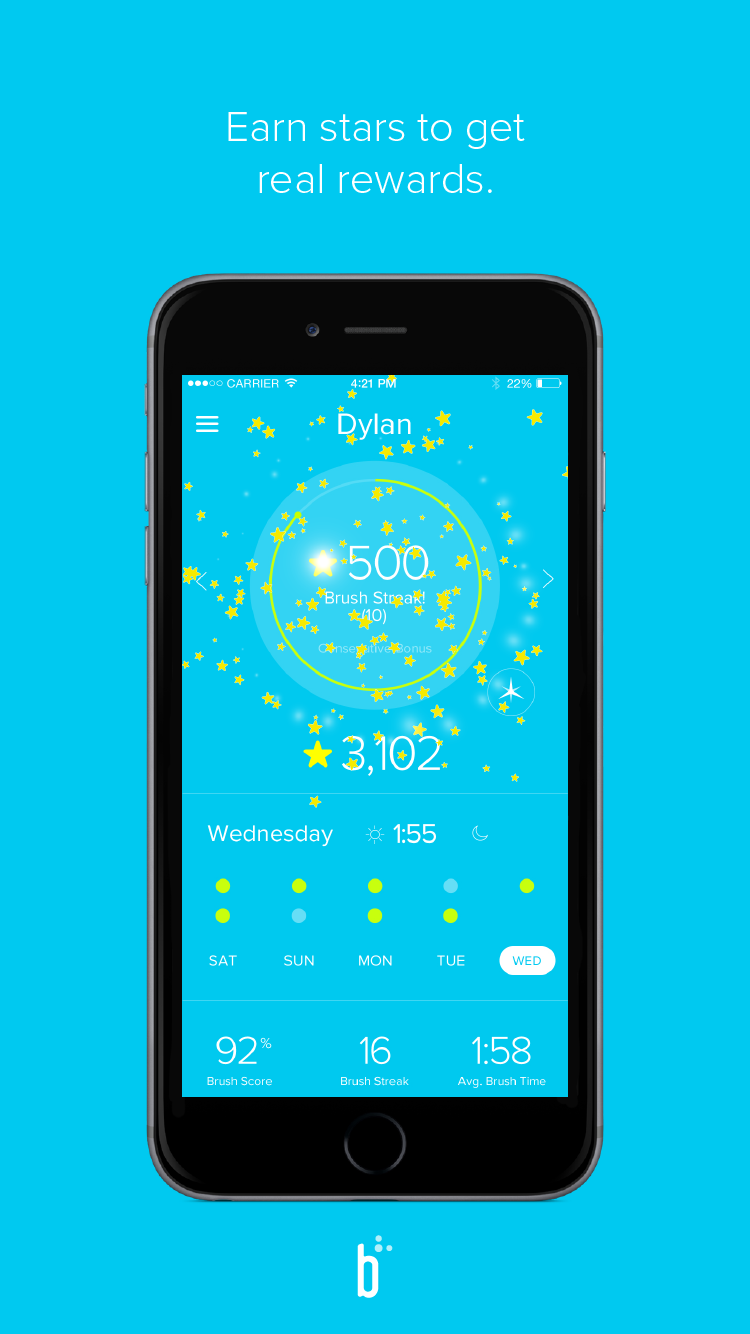 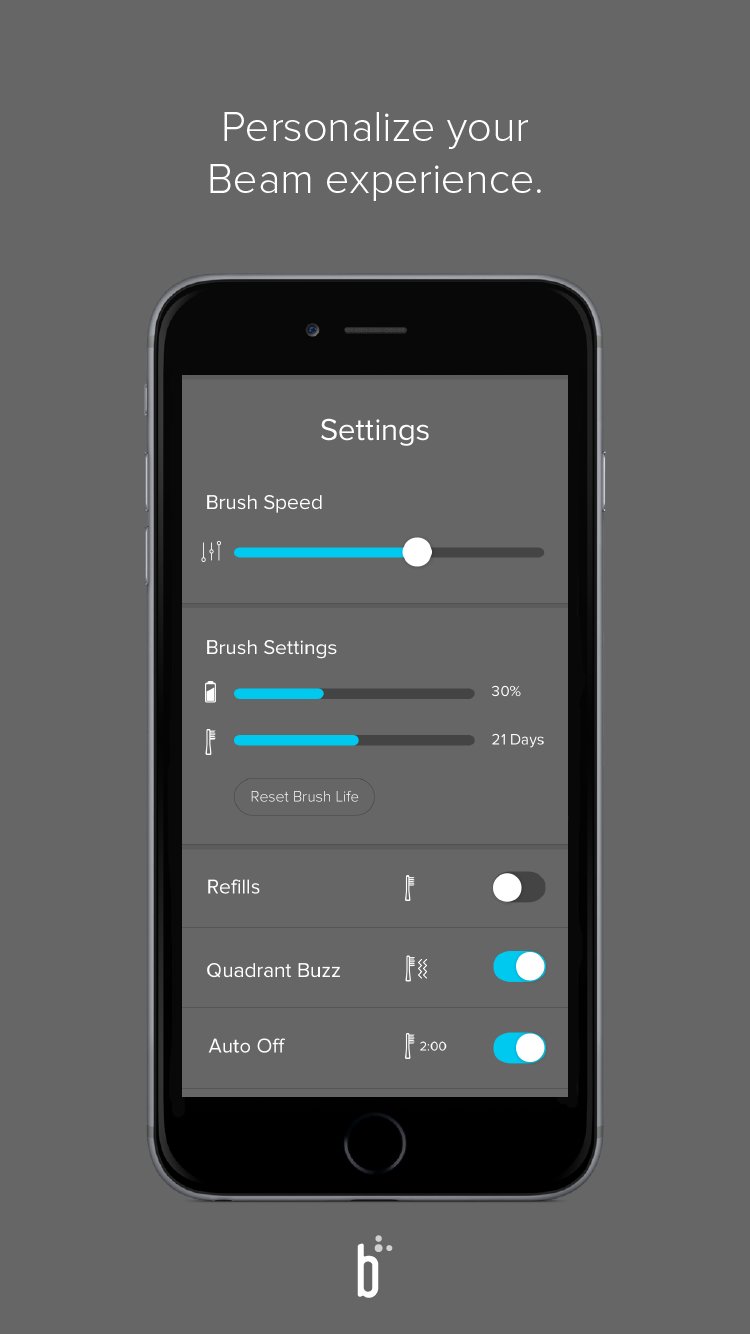 The brush is simple enough, and Beam says its motor is similar to a Sonicare. It’s a duller sensation, but that’s by design. In Beam’s research, they claim people tend to over brush and cause damage to their teeth; the less invasive motor reduces that damage.

A Beam Brush also has enough memory for two months’ worth of brushes, and a battery life that will get you right around 60 days of power as well.

It links to the app via Bluetooth, and you don’t even need to have the app up and running for it to sync. So long as your phone is in Bluetooth range, it can sync with Beam.

Dead simple to use, the Beam app does little more than chart your progress and provide you with access to your dental plan and dentists.

It also has challenges to help you earn stars, which range from adding a picture to your profile to adjusting the brush speed to fit your preference. 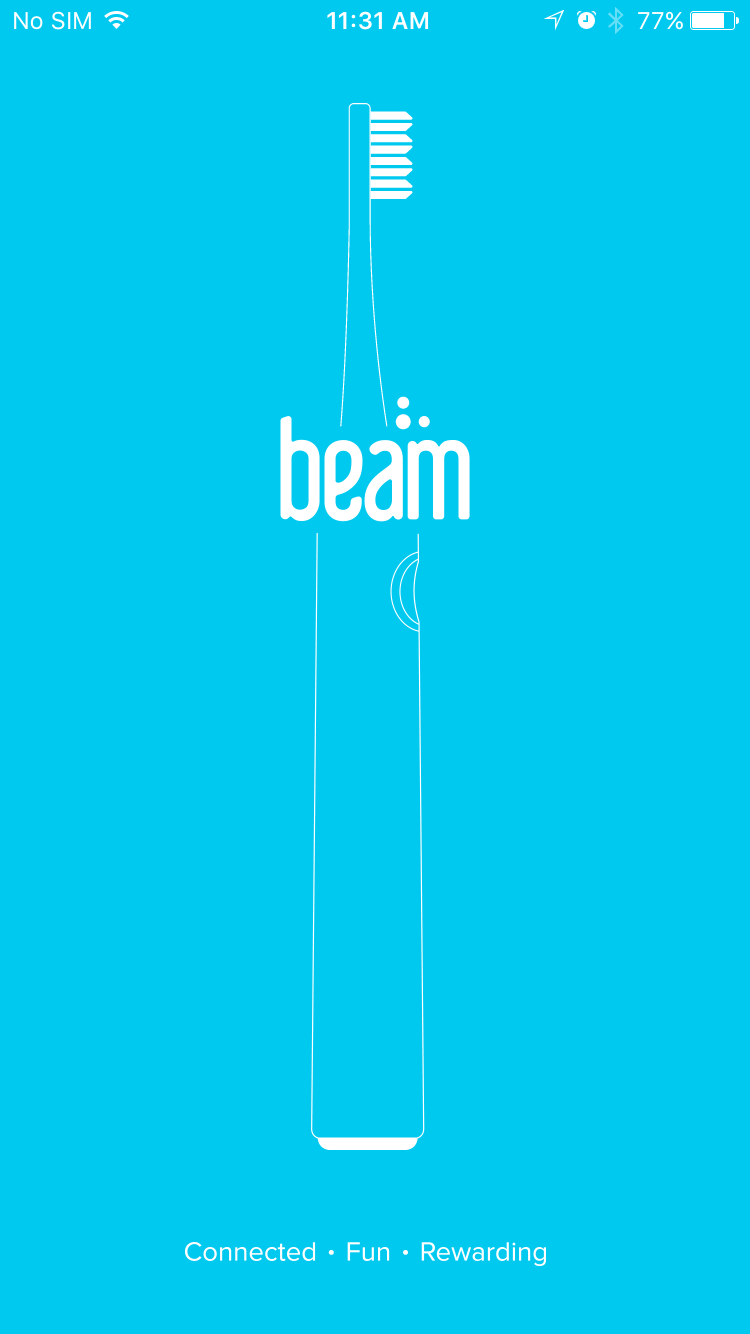 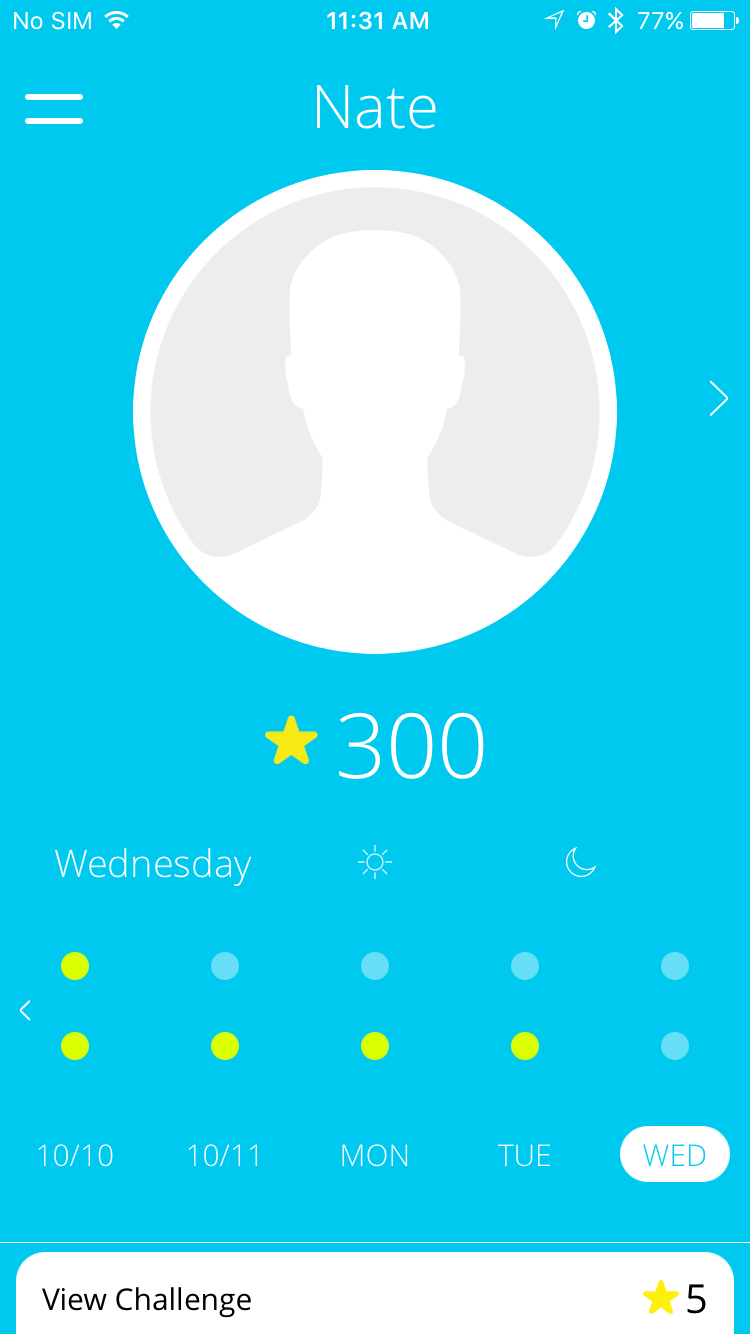 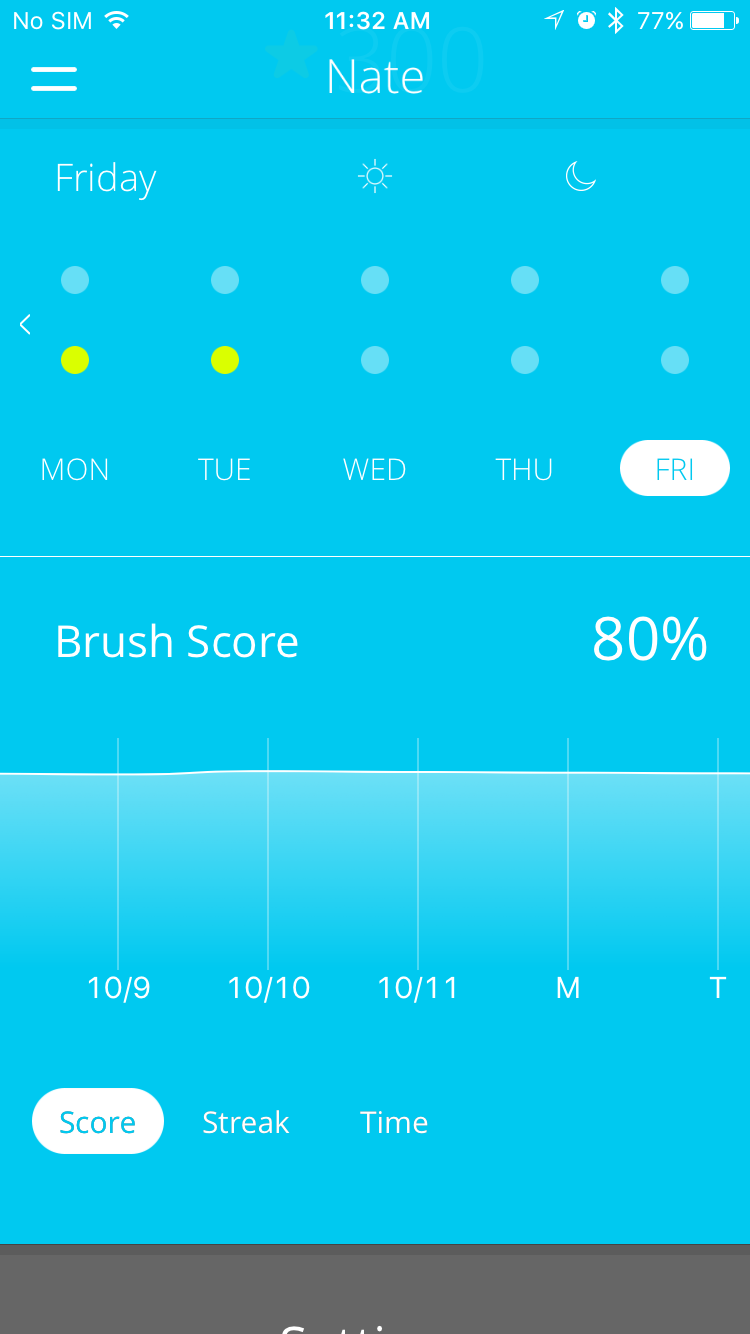 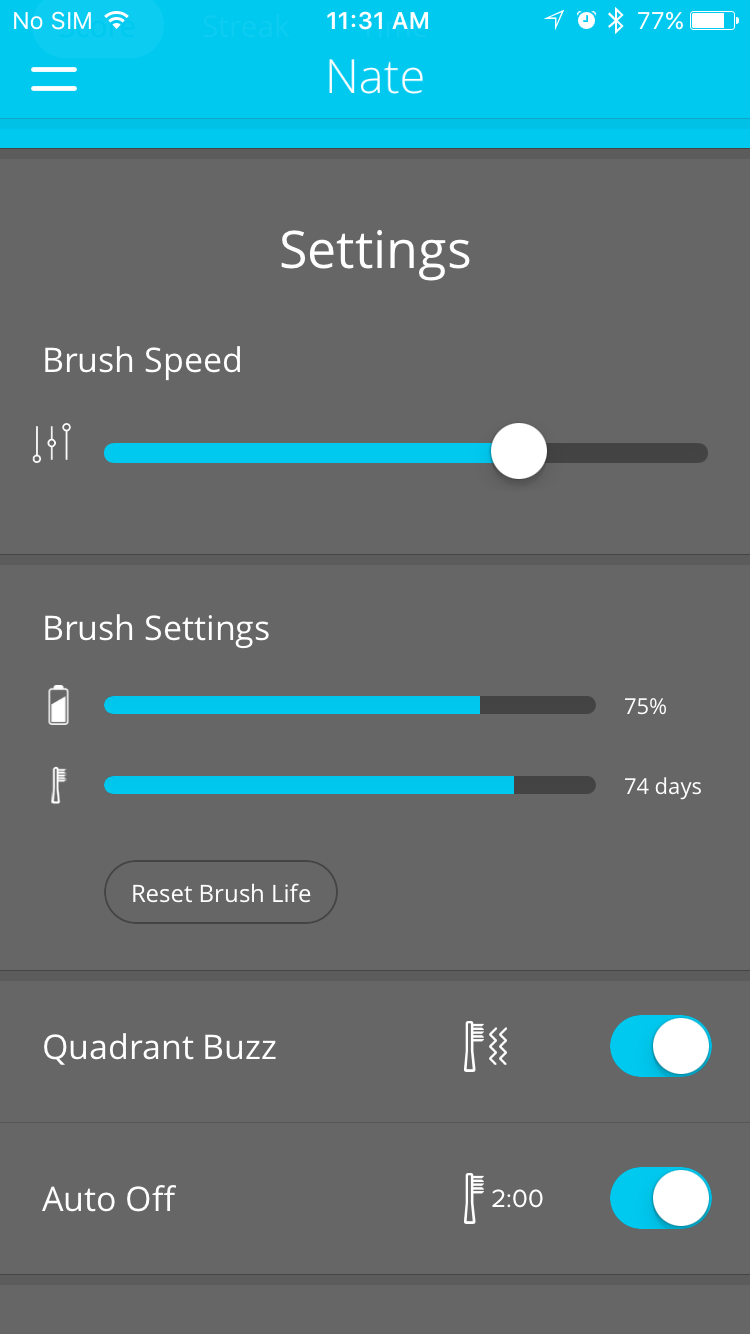 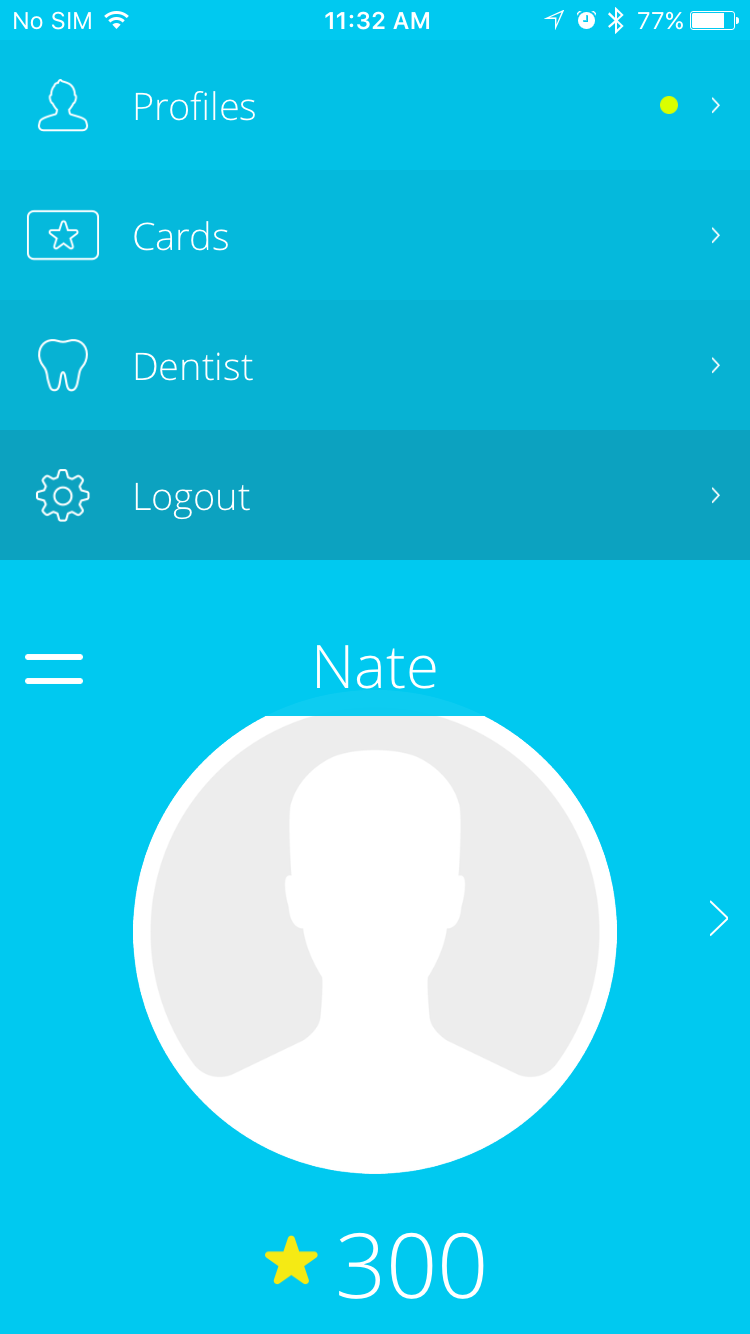 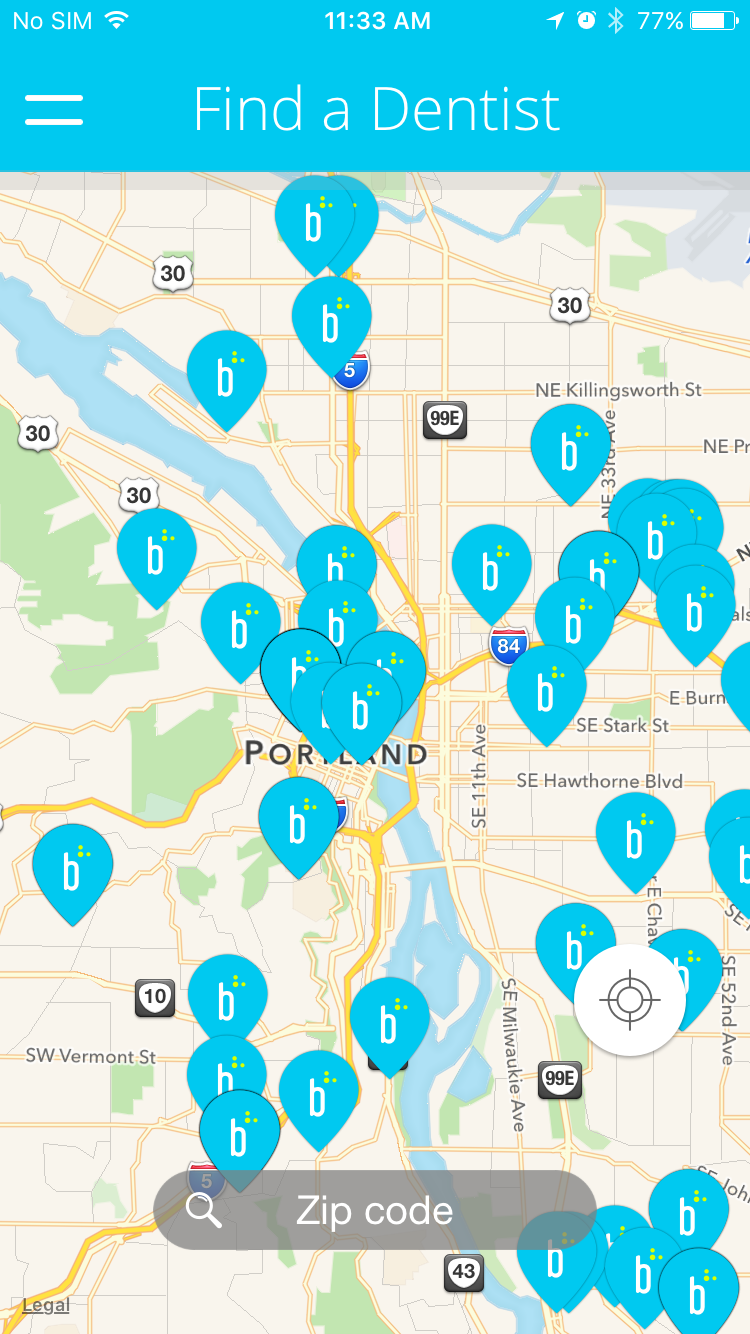 An upstart with a bright future

The takeaway I had from using Beam is that it encourages all involved — you and your dentist, really — to act better. It wants you to brush regularly, and encourages good habits to do so.

Beam also wants your dentist to provide preventative care rather than fix problems, and rewards them for having engaged patients.

The service itself is encouraging, though. Dentistry probably has a black eye for many people, likely because they go to the dentist and walk out in pain — and spent a lot of money in the process. If Beam can help its users and dentists come together without so much drilling and scraping, everyone is moving in the right direction.

If Beam is right, and we can help solve some of our issues by proper preventative care, it’ll gain a lot of traction.

Read next: Why Spain needs the sharing economy