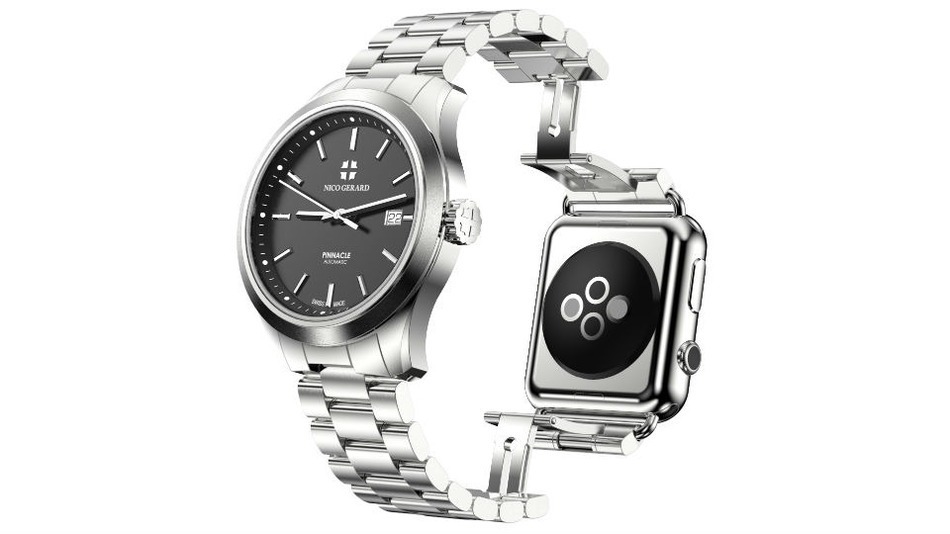 Someone should check on the welfare of the designers at California-based luxury Swiss watchmaker Nico Gerard, because there seems to be some kind of serious huffing incidents over there. Or crack cocaine.

Otherwise, I can’t imagine why a sober adult person would create a watch with an Apple Watch attached to it. Yet, you can soon own the Pinnacle brand of watches, in three colors, starting at $9,300 (excluding tax).

Take a look at the video below:

I’m so confused as to who Nico Gerard is marketing to. What kind of person wants to pay to have two watches spliced together?

Are you a secret agent who has to use a regular timepiece to blend in, but flip to your Apple Watch to alert the chief that the deed has been done?

Are you looking to marry a girl and you’re afraid that a hip new Apple Watch would read too gauche to her conservative old-money dad, but you can’t bear the thought of not checking your email from your wrist?

Are you afraid that the Apple Watch makes you look less rich than you actually are, even though the Apple Watch Edition costs more than most iterations of this luxury watch?

Are you a firm believer that although we’ve been telling time for centuries now using the sun and then, more recently, mechanized time pieces, the Swiss are the only ones who are actually right?

Do you really hate the Apple’s Watch display so much that you’re afraid it’ll damage your eyes?

Do you want to gaslight your friends into believing that you only have one kind of watch, but you flip it every so often so they think they’re trapped in The Matrix?

I’m serious: if there is a legitimate reason for this watch to exist other than the idea that you want to be that guy who would just as soon stack his Apple Watch on top of his Rolex but finds this more efficient, I want to hear from you.

Because I am confused.