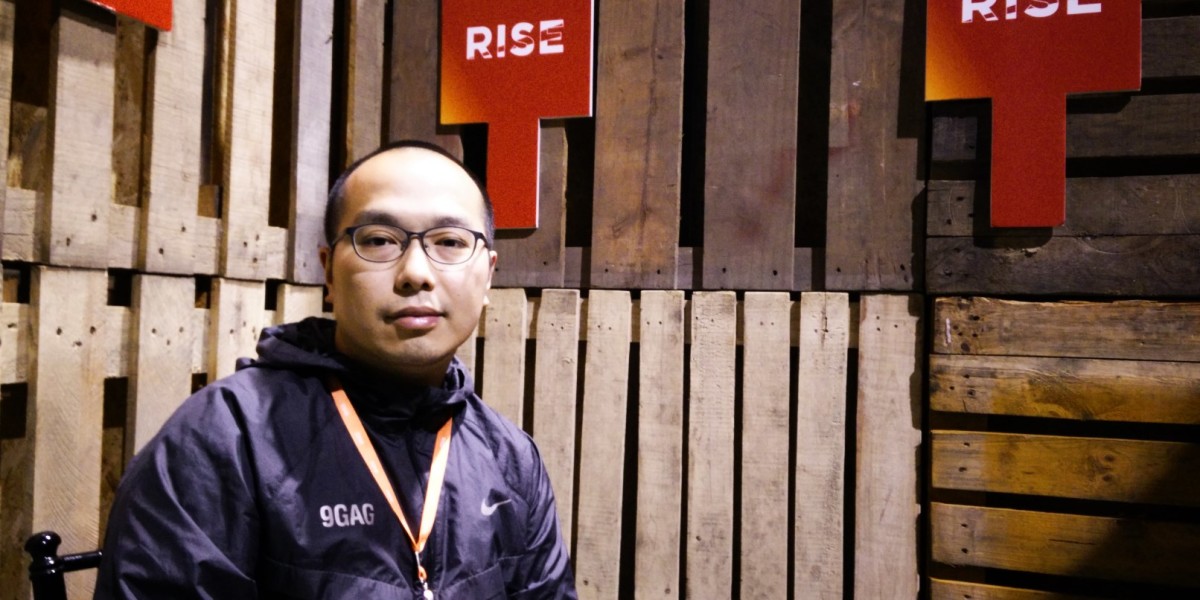 9GAG is known and loved as a source for fun videos, GIFs, memes and everything in between to put a smile on your face.

I sat down with co-founder Ray Chan at Rise Conference in Hong Kong last weekend to learn more about what the site has in store for its fans, and what social content might look like in the future.

You’ve recently begun experimenting in the mobile gaming space, releasing Redhead Redemption and Ramen Celebrity with Indonesian developer Touchten Games. What have you learned from that experience?

It’s a good experiment for us. Our users tell us they especially enjoy gaming, but it’s still hard to find good new titles — the discovery experience is broken. You only see games from major publishers in the top charts, and there’s rarely anything new to stumble upon. So we worked with Touchten Games — we asked them to revamp one of their older titles and marketed it through our channels.

In just four weeks, that brought in over a million downloads. It’s not a huge number, but it’s significant. What we learned from this is that it’s hard to develop games from scratch; it makes more sense for us to pick fun releases to distribute. That lets us focus on getting the game more exposure.

When you first considered expanding into gaming, how did you decide to only distribute mobile games, as opposed to integrating them more deeply with 9GAG the way, say, Facebook does (titles playable on the Web, heavily monetized and overly social)?

We try to not do things our users hate. We don’t want to annoy them. So the idea for us is to pick fun games that a majority of them will enjoy, that are easy to pick up. We don’t feel like there’s a need to integrate them into our platform. In fact, we don’t even really worry too much about picking games, we instead just look for smart developers who know how to make well balanced titles.

Do you plan to work with any other developers going forward?

Yes, there are quite a few. We’re working on more titles, but we don’t want to reveal any details until we’re ready to release them. There’s a bit more work needed to improve the overall experience before we go live with our upcoming games.

What’s the vision for your messaging app, 9Chat? It currently does a lot — maybe too much — and doesn’t seem as focused as some other services.

That’s another experiment of ours. We first thought about creating a way for our users to talk to each other. We’re still figuring out how to get the community talking, so it’s not the next big thing yet.

That’s interesting to hear, and I’m looking forward to it. I just covered a session that described how there’s still room for different kinds of messaging apps that allow for new ways of connecting with people.

Right, exactly. We know that we need to build an app to connect strangers. Our community is global, and we believe there are opportunities to get people from different parts of the world talking to each other. That’s the core idea behind the next version of 9Chat.

9GAG has a large following across the US and Germany. Are you working on ways to ramp up your user base in those countries?

It’s of course good for us to grow our user base, no matter where in the world they are. We need to work more on personalizing and localizing our content for them.

I don’t think 9GAG is good enough at what it does yet. Does it make you happy or entertain you every time you visit the site or launch the app? For me, that happens maybe two out of 10 times. We definitely want to improve that ratio and become your go-to app for a quick dose of fun.

Given that you recently turned 31, is there a challenge in building an entertainment app that will appeal to people of all ages?

It’s not so much about building something for a particular age group, but rather about empathy and understanding what your users want.

It might be easier for you to connect directly with your users when you’re young, but you may lack the experience and skills necessary to build and grow your team to craft a world-class service. As I get older, I tend to rely more on data and on community feedback to discover where we need to go next.

What sort of content do you think we’ll be sharing three, four, five years for now?

I’m not really a visionary, so I don’t feel like I know about that for sure. But we keep a close eye on what our users share, and we try to keep up with their needs. Some formats, like memes, stick around for a long time. The content within those formats keeps changing.

Plus, these formats are easy to create and ‘remix’ — look at Snapchat and Dubsmash, that play on video and images. That sort of thing will continue for a while to come, and it’s hard to say exactly what people will hook on to next.

You also have other apps that feature curated content, like 9GAG.tv that focuses on fun videos from around the Web. Can you talk about your plans for taking these forward?

Personalization is the next frontier for us. Recommending content for users is both a science and an art: on one hand, you need to deliver content they will enjoy based on their consumption habits, and on the other, you also want some serendipity. That’s the goal for us, and it’s pretty difficult to get it right.

We curate content because there’s just too much stuff out there, but serving personalized content is what we actually want to be able to do. That’s why Facebook is so powerful: they have a handle on people’s tastes and preferences like no other service.

9GAG scored nearly $3 million in funding back in 2012. Do you plan to raise fresh funds anytime soon?

Not just now. Our service is bringing in revenue, and raising funds invites pressure. We’d rather focus on improving our product at present.

Do you think that we’ll have more content in languages other than English as more people from emerging markets get online for the first time?

Yes. There will be more creators as time goes on, and they’ll have more tools like Dubsmash that don’t depend on language to deliver fun. The more interesting question is, how will people discover the best content from all these new creators? That’s why I think 9GAG will be interesting to work on in the future.

Certain formats lend themselves to being shared internationally. Video, for example, has tremendous potential — if it’s in a different language than yours, all you need are subtitles. Thai ads are really cool and are shared often across the globe with English subtitles.

I think language will become less of a barrier for the next generation. Stuff like Minions is popular globally because it doesn’t rely heavily on a single language.

Again, language is another reason why personalization is important. If we launched 9GAG for India and did a very local version with content only in regional languages, we’d lose a significant chunk of our audience that prefers the majority of their content in English.

Instead, if we could personalize the app to show you stuff with a good mix of everything you like in all the languages you’re familiar with from around the world, then we’d be on to something special.

Read next: What does the future of work look like?