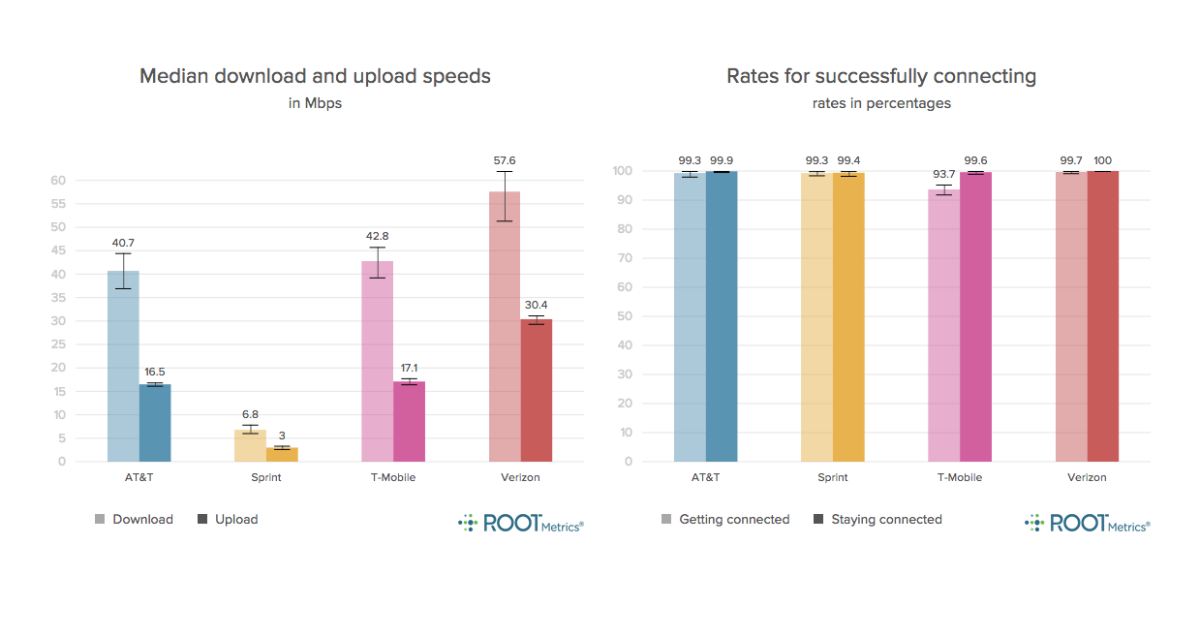 When traveling, airport Wi-Fi is a concern — but what about cellular service? RootMetrics, an independent mobile network tester, has compiled a list of the top airports for cellular service in the United States, and which carriers perform best at those airports.

As carriers go, Verizon is always tough to beat, and top RootMetric’s list with a score of 29 (out of 50, which sets a tone for this study). Second was T-Mobile with a score of 20, while AT&T scored a 13.

Sprint’s biggest problem was download speed, but it did show better reliability. T-Mobile had good across-the-board performance in the test, but was hampered by poor speed performance at a large number of airports (possibly due to its lack of low bandwidth spectrum, which it hopes to pick up in the next FCC auction).

Those same metrics were applied in testing which airports were best for travelers. How fast and reliable the connection was served key to scoring airport connectivity, though Root Metrics notes several factors could skew its results. Should an airport be too crowded and poorly provisioned for cellular coverage, things get dicey.

Airport connectivity scores were also weighted by “the estimated national number of subscribers for each network.” Essentially, it’s a way to balance the playing field by judging the carriers on how many of its own subscribers it can support at airports.

If you’re wondering which airport reigned supreme, it may not be the one you’d expect. Atlanta’s Hartsfield-Jackson International took top honors, with Cleveland-Hopkins International checking in at second place with scores of 98 and 97.4, respectively. Third place went to Southwest Florida International with a score of 97.3, and San Jose International scored a 97.1 to take fourth place honors.

Larger airports like Chicago’s O’Hare and Los Angeles International scored much lower. O’Hare is 34th on RootMetrics’ list, while LAX was specifically pointed to as a problem child in this study at #48.

The best download speed accomplished at LAX was 13.3 Mbps (Verizon), but the closest any other carriers got was 2.7 Mbps (Sprint). T-Mobile’s connectivity at LAX was 0.1 Mbps, which means a 45-minute TV show at 600 MB would take 800 minutes to download.

Read next: Pixcall for iOS lets you gather far-flung friends for a simultaneous photo shoot