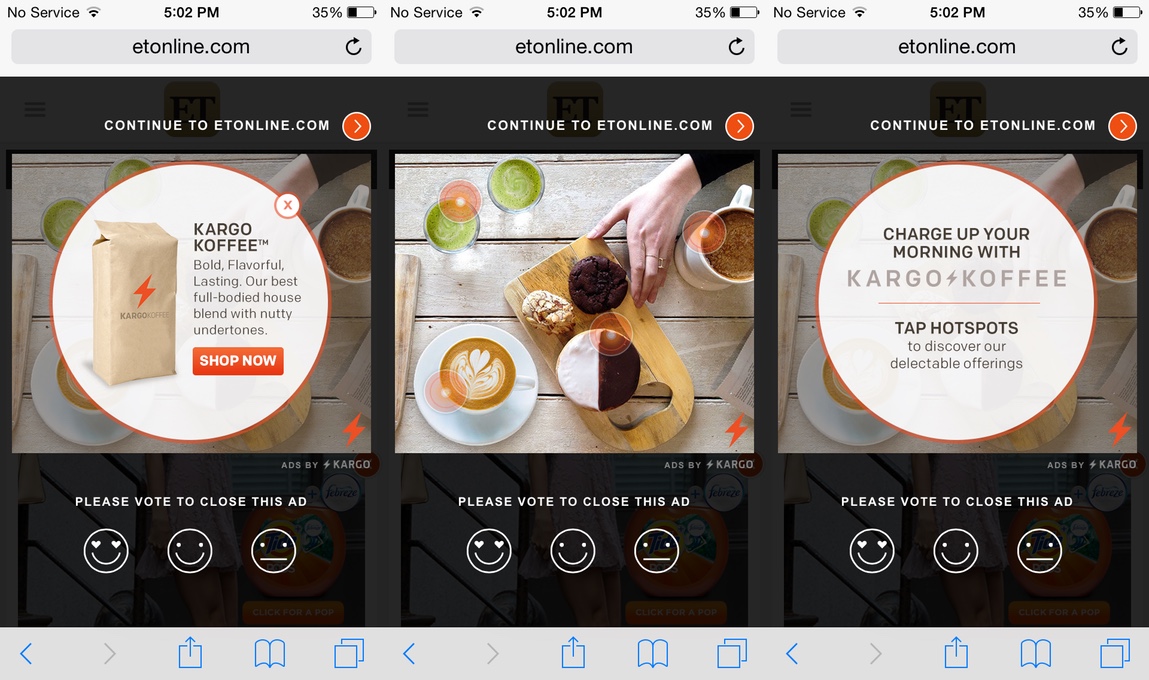 Pop-up advertisements can be frustrating. Waiting for the opportunity to dismiss them (or not) is also slightly maddening. A startup named Emogi wants to help you relate your feelings about ads to brands using — wait for it — emoji.

Here’s how it works: a video or other ad pops up with a bank of emoji at the bottom. To dismiss it, you click on the emoji that best relates to how you’re feeling about the advertisement.

When I spoke with Emogi CEO Travis Montaque, I posed a scenario in which an emotionally volatile PETA video played; one which was sad at first, but finished on a high note. He told me in that instance, PETA could pinpoint at which point the video was dismissed, and which emoji were used.

If the video started off on a dour note, people may use a sad or angry emoji to make it disappear. If viewers stuck it out to see the happy finish, they might select a tearful or smiling emoji.

The goal would be to let the advertiser (in this faux situation, PETA) know how its advertising connected with end users. While Emogi’s program could shape the actual scope of a video or static ad campaign, the advertiser would also know where to best situate those ads. It goes beyond the simple like/dislike realm and into context of how ads make us feel.

Emogi also qualifies the emoji it uses. The company runs selected emoji through an Emotion Engine, which assigns emotional context to the characters. Select emoji are then used for targeted advertising campaigns (you wouldn’t want a sad face for a cheerful soda advertisement, for instance).

As the advertising campaign rolls on, companies can see how its initiatives are performing via Emogi’s dashboard.

To help get the ball rolling, Emogi is partenring with Kargo. We believe that this additive measurement solution will help address the industry’s frustration with using CTR as a primary benchmark for success,” says Ryan McConville, Chief Operating Officer at Kargo.

Emogi’s technology helps give a voice to the silent majority—consumers. We believe that by empowering consumer response in real time, we will both enable our clients to make smarter decisions and elevate brand advertising in mobile.

Emogi wasn’t ready to tell me which companies might be using its system, but as brands clumsily try to connect with users and emoji popularity rises, it might be exactly what we need.

Read next: The psychology of emojis