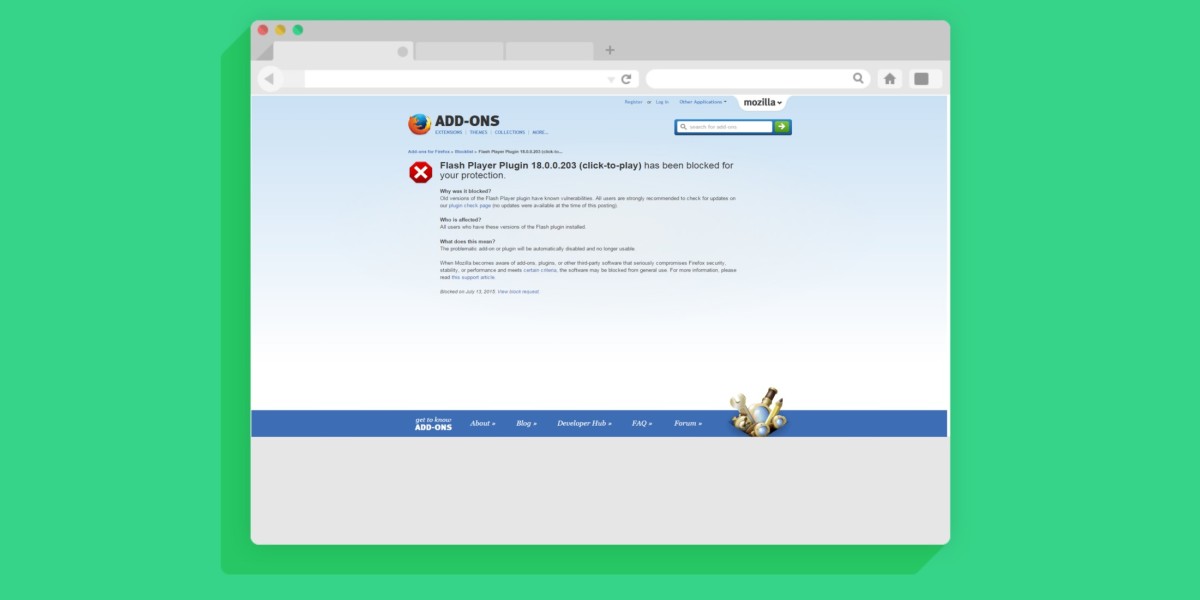 Mozilla has blacklisted all vulnerable versions of Adobe Flash in its Firefox browser, following the discovery of numerous critical security flaws in the platform.

Mark Schmidt, head of Firefox Support, took to Twitter to announce the change.

BIG NEWS!! All versions of Flash are blocked by default in Firefox as of now. https://t.co/4SjVoqKPrR #tech #infosec pic.twitter.com/VRws3L0CBW

The news comes just a day after Facebook’s chief security officer Alex Stamos called for moves to force the extinction of Flash, as the plugin is reportedly being used to spread malware on users’ systems via security exploits.

Three major Flash vulnerabilities were discovered when 400GB of security firm Hacking Team’s internal documents and product source code were leaked online. Adobe is aware of the issues and has said that it will release a fix this week.

Mozilla has noted that Flash will remain blocked until Adobe releases a version that isn’t being actively exploited by publicly known vulnerabilities.

With a major browser blocking the plugin by default and working on alternatives, it may be too little, too late for Adobe to rescue its aging multimedia platform.

➤ Flash Player Plugin 18.0.0.203 (click-to-play) has been blocked for your protection [Firefox Add-ons via The Verge]

Read next: Adobe Flash is terrible and it’s time to kill it

Read next: 3D-printed Donald Trump butt plug is the best the asshole has ever looked