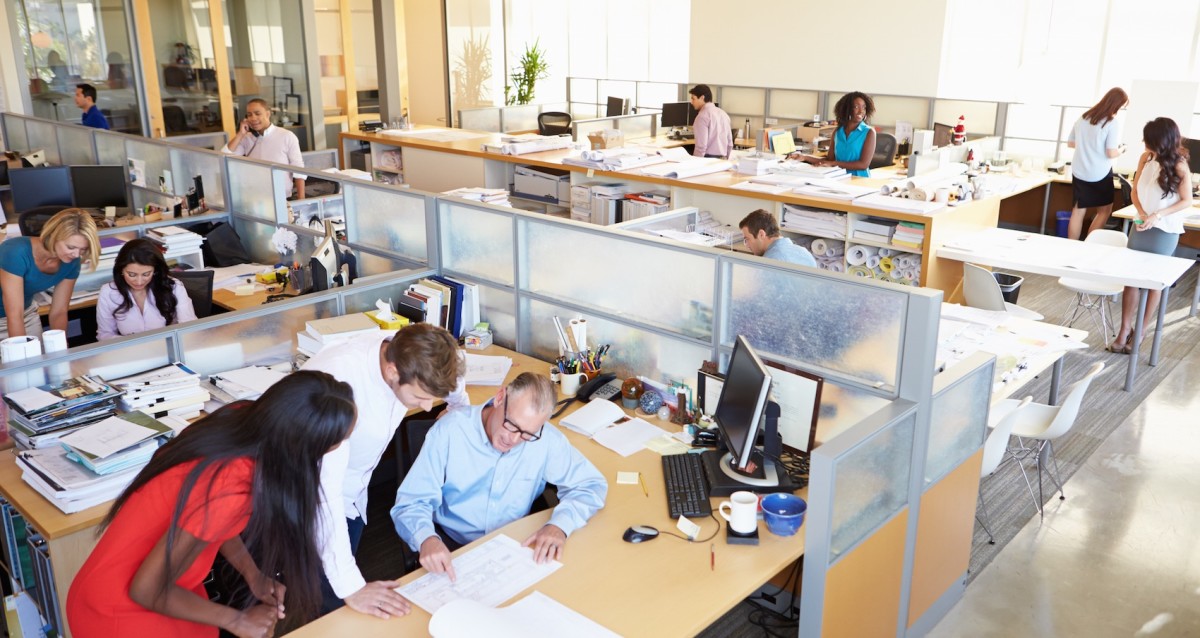 If you were hoping to be an early adopter of the open office, you’ve missed the boat – and the second boat and the one after that. As of 2010, nearly 70 percent of American offices were employing some version of the open-office plan. Companies like Facebook and Google have been waving the no-walls banner, standing among the exposed brick and couches now littering the office landscape.

Like all popular movements, the open office isn’t without its vocal detractors. Lindsey Kaufman summed up the dissenting opinion succinctly in her Washington Post piece, “Google got it wrong. The open-office trend is destroying the workplace.”

Criticism of the plan’s lack of privacy, propensity for germ spreading, and inability to silence loudly played Metallica are all valid. However, with a clear plan and guidance from employees, the open office can still be successful, achieving all the goals it sets out to.

Frank Zappa may have turned one size fits all into a hit, but corporations are not Frank Zappa. Having a generally good idea or business model doesn’t mean that any organization can simply pick it up and run with it, and the open plan is no exception to that rule.

J.C. Penney, for example, learned this lesson the hard way when it took on Ron Johnson as its CEO in 2011. Johnson created the Apple Store as we now know it, so why wouldn’t J.C. Penney want him onboard to turn its failing stores around? The company’s revenue fell 32 percent over a four-year span, while the stock is still down more than 70 percent since the beginning of 2011. The Apple model is not the J.C. Penney model, as it turns out.

Open-plan layouts could be the best corporate invention since LIFO accounting. And even with that high praise, they still wouldn’t fit every situation.

Planning for the open plan

Instead of dropping a hundred employees in a warehouse and saying, “Go be more productive,” companies have to plan the plan. The goals of tearing down walls and putting everyone on the same level are to foster camaraderie, simplify communication, and increase productivity. None of those goals are achievable – except by sheer luck – without talking to employees ahead of time.

Kaufman’s experience of being “forced to trade in [her] private office for a seat at a long, shared table” is not an uncommon one. People’s offices are their second homes. Many of us spend more time at our desks than we do with our families. Jamming everyone together without a plan generates friction and makes people uncomfortable.

Keep the volume at a reasonable level

Kaufman’s experience of being subjected to music piped in over the PA is indicative of the open plan’s abuse. There’s a misconception that, when the walls come down, companies can do anything they want in the open space. Instead, businesses should realize the trade-off they’re asking employees to make.

By removing walls to increase communication, you’re actually trying to increase sound. You don’t take down cubicles and put an end to private offices to generate more  interdepartmental emails – you do it to get people talking. But not everyone can work in an environment that’s all noise, all the time.

Your sales people need to be separated from your IT team. Your writers can’t be right up against the front door. And you have to provide a place for people to be quiet without interruption. Facebook, for example, proactively built a library in its New York headquarters for time when people need quiet.

Talking to people to understand how much quiet time they need can ensure you never encroach on that valuable time.

While silence is a part of being alone, privacy is more than just a quiet place to talk. Giving people privacy means giving them a space where they aren’t on display from all angles. In many open offices, there’s nowhere to run when workers need privacy.

Companies can design a variety of meeting and working rooms to overcome this. Keep in mind, people don’t just want privacy to discuss things – sometimes they want to work without eyes on them. If you build an office with ten large meeting rooms and no small private spaces, you don’t give people a chance to escape. Meeting rooms are designed for meetings, not for writing, one-on-ones, or sensitive phone calls.

Some furniture companies have also sprung up to address privacy concerns, offering little getaways amid the open office. While these provide a certain amount of seclusion, they are not enough on their own. Create quiet, secluded spaces for your employees to use when they need some time alone.

In a final infuriating twist, Kaufman bemoans “the 12 pairs of eyes [she] felt judging [her] 5:04 p.m. departure time.” Even escaping from her open-office hell was made more difficult.

There is a common conception that employers like open-office plans because they cut down on build-out costs and let managers keep an eye on everyone at all times. Unless

employers address concerns about why an open plan is the right approach for their company, employees are going to be suspicious. An office layout should mirror the company’s vision for itself.

Having a CEO who never talks to their employees sitting elbow to elbow with them rings false, and everyone knows it. On the other hand, a company with strong teams, minimal office politics, and a need for cross-pollination is already working like it’s in an open plan – the desk layout just reinforces the ideas already present.

The payoff for a well-designed open office

For companies that can get it right, the open-office plan results in real increases in productivity and employee engagement. A UCLA report found that a move from closed office environment to an open plan increased employee performance by 440 percent, on average.

Another study found a 5.5 percent decrease in process time and costs for employees in a new open plan environment. The layout also caters to younger workers, who thrive in collaborative environments or want flatter corporate structures.

But the mere layout isn’t enough. Metallica is not good background music when you’re trying to – well – do anything work-related, really. By laying out a clear plan, setting physical and mental boundaries, and communicating everything to employees, your company’s open-plan layout will be on track to realize office cohesion and workplace achievement.

Read Next: How to create a culture of execution

Read next: Last chance for 67% off NordVPN 2-Year subscription at just $39 - ends tonight!