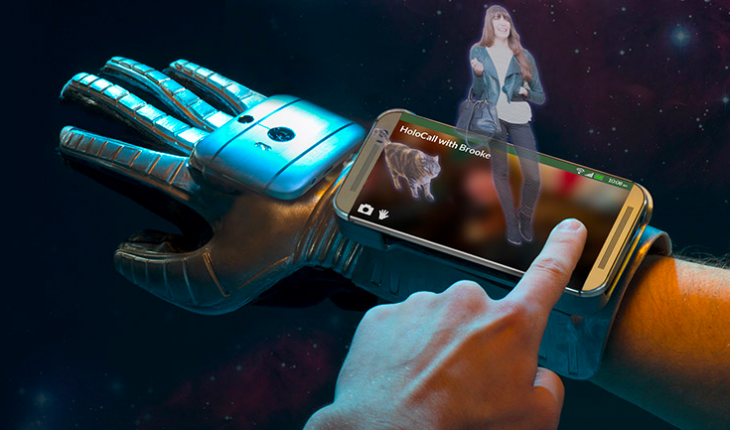 April Fools’ Day might be dying a slow death in reality, but on the Web, it’s being taken to a whole new level every year.

While it should be about jokes and not just the publicity, it’s always fun to see huge companies like Samsung and Google testing the bounds of credibility.

We’ve put together a list of the best (and worst) pranks from around the weird and wonderful world of tech, from the past few years.

Giphy has branched out into the business mailing your favorite GIFs — for real. Each time you send a GIF, they’ll box up the real thing and deliver the GIFt right to your doorstep. Not.

But first, let me take a Twelfie.

The Stick is made from unobtainium (as NASA calls it) and can be charged using solar power. The spring-loaded cradle will support any phone and it will be available to buy from $39.99 by Christmas in Neverland.

Skype got in on the fun… sort of.

Skype’s global director for Social Media explained why the company chose not to prank its users:

@MartinSFP for respecting and judging its audience values appropriately I hope! Meaningful content’s a 24/7/365 job, not one day.

We took a similar approach to the April Fools’ Day festivities as well.

The last-minute accommodation app revealed its latest project today as an attempt to “take mobile to a whole ‘nother level.”

The package is available through the HotelTonight app and it includes a desk-side pillow and sleep mask, some gourmet food (Pot Noodle), a teeth brushing service, mobile minibar, blue bottle drip, and the option of a spa treatment (on wheels) or a sponge bath.

Samsung appears to be taking its commitment to the culinary world very serious today. The BLADE edge is a cooking companion every modern foodie will want. Running on the latest OS, the BLADE edge is essentially a Galaxy S6 that has been turned into a knife. According to Samsung, the razor-sharp diamond edge will cut through tomatoes or lobster tails with ease.

The smartest parts of this knife are the sensors – they analyze your grip and strength to adjust the weight and balance of the knife to improve your chopping experience. You’ll never have to worry about cutting yourself with this knife either. It is programmed with KNOX security so it will retract the blade if contact with skin is detected.

Motorola shows off a selfie stick that probably should be real

There’s always an April Fools’ Day fake creation that seems like it should be real. And here it is. The Moto Selfie Stick.

The parody video is set in a dimly lit carpenter’s workshop where the creation is made. The narrator, fittingly moustachioed, tells us in a soft tone of voice: “To me, the selfie stick is not just an accessory, it’s an extension of who you are.”

While we might not agree with the selfie stick phenomenon, this one is definitely the best looking one we’ve seen. Even if it’s not real.

Sony shows off the PlayStation Flow, a new immersive way to experience games.

Sony is due to release the PlayStation’s virtual reality headset Project Morpheus in 2016, but it looks like the company has another wearable to keep us occupied in the mean time – PlayStation Flow. The connected goggles, sensors and headphones allow you to take part in any underwater activities that might be in the game you are playing by actually going for a swim. Your PS4 will link to the goggles via Bluetooth and you can see the action on LCD screens.

HTC introduces the RE Sok.

HTC is showing off the latest ‘feet’ in engineering today. The RE Sok is a connected smart sock that can keep you up to date with all of your notifcations through the tiny screen or using ‘read out’ feature on your ankle.

The socks also have an integrated GPS tracker so you can track them down if they go missing in the laundry. Another handy feature is the hole detection. If your RE Soks are getting a bit worn out, they will notify you that it’s time to get a replacement. The socks come in a variety of colors as you can see below.

The Force has been discovered by researchers at the CERN labs.

It’s no longer reserved for the Jedi it seems. The European research center announced the discovery today with images of scientists already demonstrating its many uses.

“The Force is what gives a particle physicist his powers,” said Cern scientist Ben Kenobi of the University of Mos Eisley, Tatooine in the press release. The center has noted that many scientists were already using the force to communicate, influence minds and to do some heavy-lifting.

Groupon launched Grouber today. It is a cab service where all the drivers are cats. The cars use GPS-guided lasers to give the feline drivers directions so it is perfectly safe.

Cue everybody humming Prince for the day…

Tinder and Uber have formed an unlikely alliance.

This partnership is a tale of two sides. Tinder for Uber means if you match with an Uber driver, the two of you can split your fare.

And on the flipside there’s Uber for Tinder. It means when you match with anyone on the dating app, you can order an Uber to collect you both to meet up.

YouTube is insisting we all listen to Darude Sandstorm.

YouTube is getting heavy handed in its suggestions today with Sandstorm being the song of choice.

The streaming service has also introduced a music button to ALL of its videos that allows you to add Darude Sandstorm to whatever you’re listening to. https://www.youtube.com/watch?v=ry0jZfBzmwk

The accommodation service appears to be experiencing a glitch in the space-time contiuum and is offering listings from generations past. You can browse caves from Pangea, castles from the Middle Ages, some interesting dwellings from Ancient Rome including a giant wooden horse or you could travel to San Francisco in the sixties.

The search engine built a backwards version of its site – http://com.google. Even the results are displayed in reverse. Google is King of the April Fools’ Day pranks. Check out our full roundup of Google antics here.

Samsung is crushing the dreams of foodies everywhere today with its prank. The company ‘announced’ that it was introducing a new Gourmet Mode for the cameras on the Galaxy S6 and S6 Edge. https://vine.co/v/OLx50MOMKv3

“Black and white text has never looked so good,” says Tom Messett of Microsoft’s Lumia Marketing team. Watch the video to see if you want to go back to basics. https://youtu.be/irJQDGw8Ptk

Aimed at “very wealthy, light people” (because of ‘the mount’), the new service is supposed to make us “really question what it means to travel from A to B.” https://youtu.be/Mw49oK9bMLM

Uber announced a partnership with National Geographic Wild today. With just a tap of a button you could be enjoying the company of a real lion cub.

*Uber does want to help save real lions (even if the campaign is a joke). You can text “Lions” to 50555 to donate $10 toward National Geographic’s ground conservation projects.

Roku has introduced Rendezvous –  a dating service for single streamers.

The new dating channel for single streamers is the result of extensive research according to the company. It might not be so bad if this became a reality. It could be said that choosing a partner based on their taste in movies is better than swiping yay or nay on their choice of filtered profile photos.

Lyst has been taken over by memes

You can shop by meme on the Lyst site for the day. With looks inspired by the iconic Ikea Monkey and Sparta, you can’t really go wrong.

Think dial-up modems, basic design, and hit counters. Hulu had it all.

There was the time Conan O’Brien ousted Pete Cashmore as Mashable’s CEO.

We wonder how that’s going?  https://www.youtube.com/watch?v=xxUAK5LeA5U

Complete with a flexible Super Emo-LED display and a feature called ‘talk to the hand’ that recorded people’s voices while you were busy, Samsung’s smart glove looked like a winner. Pity it was all a joke though.

HTC then ‘released’ the Gluuv. Naturally.

Funnily enough, you can still check out the HTC Gluuv website. Go on, grab a glimpse at the hypothetical future. The Michael Jackson style glove boasts an 87.2-megapixel camera for the perfect awkward arm selfie.

Samsung got us all a little too excited with the Fly-Fi portable mini router.

The concept was logical. I mean, if companies are using drones now, pigeons seem like an obvious alternative. They’re everywhere. https://youtu.be/p1TWVkP-L84

Airbnb (or ‘Airbrb’) got in on the practical jokes with a desk rental service in 2014 too.

I have to say, I can see this one happening. Maybe Airbnb was just testing the waters for an upcoming service. https://youtu.be/S0MmNM0a_RU

The Orbotix Selfiebot by Sphero is exactly what it says on the tin.

If someone had suggested five years ago that we’d be carrying around batons to take photos of ourselves, we would have all laughed. Sphero had the right idea all along. https://www.youtube.com/watch?t=18&v=ZaR4X2iJo6M

The Pirate Bay took things a little further with ‘the biggest step in its history’… into our minds.

In cooperation with Russian, Israeli and Japanese neuroscientists, we are developing a device that will embrace your entire mind. Using laser projections directly onto the retina it’ll no longer be any resolution but 100%. The sound will be delivered in a range from 12Hz to 79kHz and will cancel all noise from the outside world.

Some users fell for it hook, line and sinker.

ThinkGeek made us all want Hungry Hippos for the iPad to be real.

The site offered users the chance to upgrade to the Pro account for free. Sadly, when you did, the only thing you got was a nice top hat for your avatar.

Every featured video on the site brought you to the classic Rick Astley video “Never Gonna Give You Up.”

We formally apologise for the song being stuck in your head all day.

The streaming site released a statement to say it would be going dark for a decade, and that the site was actually just an eight-year-long project to find the bets video in the world. The winner would be announced in 2023. Tim Liston, ‘competition director’, said:

We are so close to the end. Tonight at midnight, youtube.com will no longer be accepting entries. After eight amazing years, it is finally time to review everything that has been uploaded to our site and begin the process of selecting a winner.

Hang on in there.

Lastly, there was the Goat Simulator game.

Read next: Roundup: All of Google’s jokes for April Fools’ Day 2015

Read next: ByHours now lets 'business travellers' book a hotel room in London for 3, 6 or 12 hours