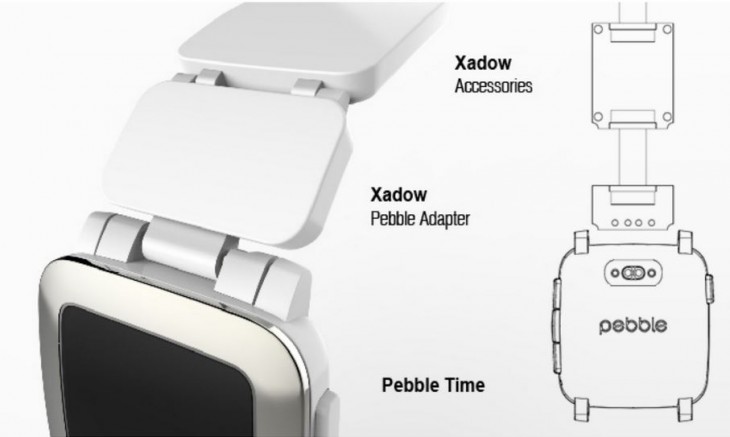 Although Pebble’s new Time and Time Steel watches made headlines for their color e-ink displays, arguably their coolest feature is support for interchangeable ‘smartstraps’ that interface with the watch for extra functionality. Still, so far we know next to nothing about what they can actually do.

Pebble is today releasing some concrete details, starting with a $1 million pledge towards the development and support of smartstrap projects. While that may sound a little strange, keep in mind Pebble isn’t actually developing the straps themselves – that’s completely up to third parties.

In the process, it’s also detailed two of its favorite concepts. Seeed Studio’s  (yes, that’s three ‘e’s) modular strap allows you to add a variety of pieces that cover different functionality. Seeed already makes small arduino-compatible modules which will be compatible with the smartstrap interface, so prototyping new features should be easy, according to Pebble.

The second concept is from Spark.io, and it basically would allow your Pebble to connect to a cellular network and be completely independent from your smartphone. The Spark Electron also started as its own Kickstarter project, before being adapted to the smartstrap platform.

Not every project is getting funded of course, but Pebble says it will stand behind the best of them; after all, it lunched on Kickstarter itself. The company recommends developers tweet @Pebble or email them their ideas. Aside from the cash, Pebble will also promote some of the projects on its website and Kickstarter pages.

Smartstraps are a clever way of getting past the limited functionality of smartwatches and potentially adding long-term value. On one hand, not everyone needs GPS or a heart rate sensor. On the other hand, it could enable niche tools like glucose monitoring for users that need it

In a market where people often question the purpose of wearables in the first place, the customized experience could give Pebble a significant advantage over the Apple Watch and Android Wear.