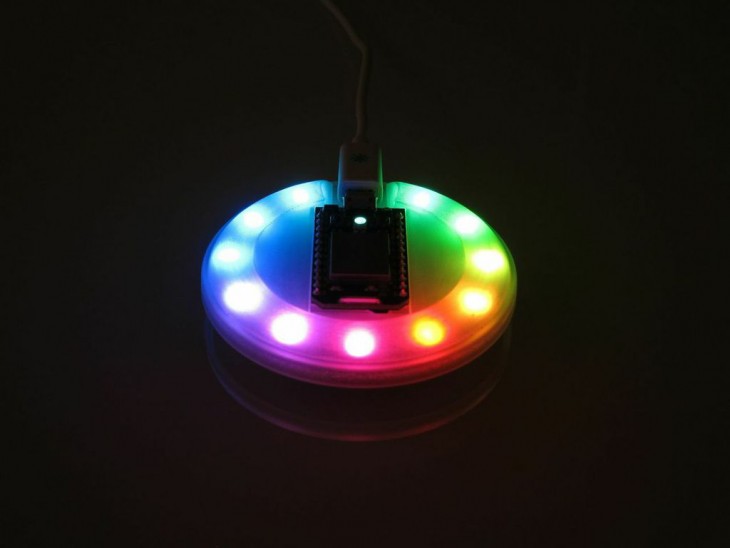 We last spoke to Spark late last year when it had just announced the Photon, its $19 kit for building internet-enabled products. Now it’s back with the Spark Internet Button which takes the connectivity of the Photon and its predecessor, the Core, and hooks it up with the internet automation service IFTTT.

The arrival of the Spark Internet Button brings with it a dedicated Spark channel on IFTTT. The channel has four triggers that your device can activate – when a new event comes in, when something changes, monitoring a change and monitoring to see if it’s switched on or off. It also has two actions: triggering an event in the physical world and publishing information to your device.

The $49 Spark Internet Button, will ship with the Photon developer board (which clicks directly into the housing) and is backwards compatible with the Core. It has 11 RGB LEDs, a 12-bit, 3-axis accelerometer and 4 press buttons built in. Like the Photon, it’ll begin shipping in March.

Spark founder and CEO Zach Supalla says the goal of the Internet Button is to make creating internet-connected products even easier for total beginners:

“Our goal is to help people create the next generation of connected products. Everyone comes in a different points. A lot of the people we sell to are already makers, they have some level of knowledge.

We wanted to make it easier for people who have zero knowledge and still want to start building things, so we decided to create a button. The thought was that we could boil down the tech into a toy but make it really powerful.”

Supalla says his favourite use for the button is keeping his wife informed of his movements: “I always used to forget to text when I was coming home, now with IFTTT, if the button’s pressed, it sends a text to my wife to say I’m coming home.”

Spark has also put Internet Buttons to good use in its office: “We’ve been experimenting with everyone having a button on their desk. If it’s red, that means they’re not available and it updates their status in Slack. Press again and it turns green and their available in Slack again.”

Supalla explains the potential of the button very simply – “You can make this the remote control for your connected hardware.” – but has bigger ambitions too: “Eventually we’d like to do more API integrations. The one I’m excited about is turning it into an Uber button, which we can do quite yet because their API isn’t exposed.”

Still, given how addictive being able to summon a black car whenever you fancy is, it’s probably best that we don’t have access to that magical Uber button just yet.