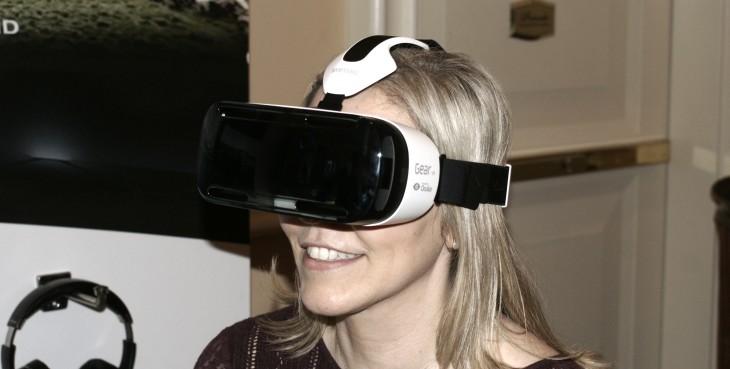 Remember the film Field of Dreams and how the hero was told over and over again that “if you building it, they will come?” Yeah, that’s not exactly true. Just ask any hardware company.

You really need more than hardware, you need a reason to use that hardware and for VR, it means very specialized content for an emerging market. Samsung realized this with its VR platform, the Gear VR. So it built the Milk VR service for its headset.

I got a chance to test drive the service. It was fun, but like all VR technology, it still has a ways to go.

When you put on the headset with the Galaxy Note 4, you’re dropped into the main menu, which is a round room with videos selections on a virtual wall. You can use the trackpad on the side of Gear VR to navigate or just spin in a circle. I was in a chair where spinning is a relatively safe movement with your eyes covered by technology. After you find something you like, the gaze detection determines where you’re looking and you tap the trackpad on the side of the headset to make a selection.

I watched a narrative video about being recruited into something weird (possibly a government agency, maybe a cult), a performance by the band Alabama Shakes, rode in a jet, skydived and got a tour of the space shuttle Endeavor’s cargo bay.

Some content was better at than others and that’s the point of Milk VR. It’s curated content for a platform that’s still finding its way.

There’s no real VR video industry standard. Because of that it’s difficult to determine what’s going to work on what device. Plus, you have to hunt down content that probably isn’t that good. Milk VR is for those folks that bought the Gear VR and Note 4 and want to actually use the device on a daily basis.

The video was pixelated and sometimes felt out of focus because of this. Samsung says it has to do with the limitations of the hardware. While the videos themselves are 4K, it’s also a giant ball, so the portion you’re looking at is closer to 720p. Anything more and the hardware on the phone would choke. There was no visible latency while moving my head around thanks to the onboard Gear VR sensors.

Hardware aside, the experience was pleasant overall. If you have a Gear VR, this is great. If you’re planning on buying one, this might help you make a decision. Even if you don’t plan on entering the VR world anytime soon, Samsung is trying to make it so that if you do decide to buy something to shove on your face in the future, there will be something worth watching.

Read next: UberCARGO lets you transport your stuff and fulfill deliveries with a van in Hong Kong