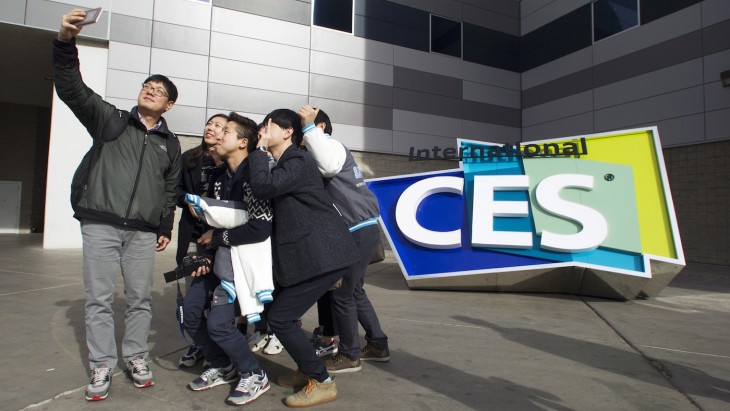 With major announcements out of the way, we spent most of CES day two (technically a third day for us here in Vegas) talking to companies and playing with gadgets available on the show floors. Many of them are super fun, while others were just a bit strange.

He also took a break from the noisy CES show floors to check out the B&O H8 wireless noise-canceling headphones – the first of its kind from the luxury company. The circular plates on the earmuffs act as volume control, but instead of using capacitive touch, it measures tiny distortions in the aluminum as you place your finger on it. Now that’s awesome.

While we didn’t get to use this feature today, BlackBerry got its share of news in today by showing off BBM for Android Wear. It works similarly to Hangouts, but you know, for BBM and all its friends.

I met up with Rich Riley, the CEO of Shazam, to talk about where the company is headed in 2015. With recent updates to its app late last year, the aim for 2015 is to work more closely with retailers and print ads to bridge customers with brands through their smartphones more effectively. He plans to do so by incorporating Augmented Reality, wearables-optimization, beacons and more.

I also sat down with Netflix today to talk about its plans for the coming year. After announcing its TV recommendations program on Monday, the company previewed some forthcoming UI updates for its mobile, Web and TV apps that will make streaming more efficient while pushing 4K and HDR content to the forefront.

The popularization of 4K making its way to the general consumer is exactly why our Owen Williams thinks the 3D TV fad is officially over. We never saw media companies optimize for 3D like they have with 4K content. Fare thee well, 3D TV. We hardly knew ye.

We swore we saw our friend Robbie around Las Vegas Convention Center today checking out cool stuff, but haven’t heard much from him in person after he posted a Vine of these crazy robot spiders. Did the tech arachnid overloads kidnap him!?

Read next: The best looking smartwatch at CES wasn't even on display