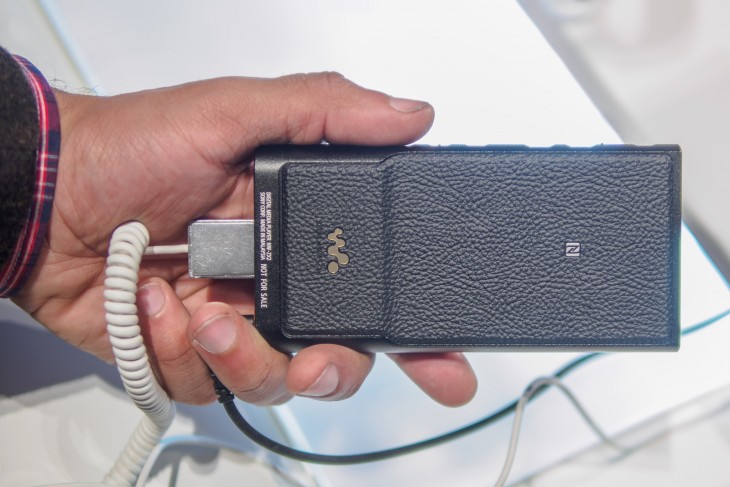 Remember the Walkman? Well, while it’s never quite recaptured the recognition it had during the cassette tape heyday, Sony still hasn’t given up on the venerable music player.

Recently, the company has been aiming its Walkman line at audiophiles, and at its CES conference today, the company announced a new flagship model, the Android-based NW-ZX2. The model is a followup to last year’s ZX1, and is able to play music files up to 192 KHz/24 bits, as well as high quality codecs such as FLAC and DSD.

For your lower quality music files, the new Walkman includes a ‘digital amplifier’ technology called S-Master to reduce distortion, as well as special processing, dubbed DSEE HX, to upscale compressed music files.  Both of these serve to widen the frequency range reproduced by the device when listening to non-optimal music files, such as is often the case when using streaming media.

I was able to try out the new enhancements briefly. Although it’s very difficult to gauge audio quality at a crowded press event, there was a palpable, if subtle difference in the audio being played through the device with the enhancements on – the high frequency range in particular seemed to gain aided sparkle and detail. It would take extended listening in a quiet location to judge whether it’s a true improvement, however.

As for the hardware itself, you’d be rather surprised by its size if you haven’t seen its predecessor; it’s about the height and width of an iPhone 6, but around 3 times thicker to fit the intense audio circuitry. This is also partly because it comes with 128 GB of storage (expandable via microSD), and a “large-capacity battery” rated to 60 hours of playback to keep your music playing through those longest of days. This isn’t a device to strap on your arm for your morning jog.

If you want more Sony products in your audio pipeline, the company is also introducing a portable amplifier and wireless headphones along with Walkman. The PHA-1A amplifier is meant to drive more power-hungry headphones, and can also function as a digital-analog-controller to improve playback quality when connected to your PC.

Meanwhile, the Buetooth MDR1-ABT is a wireless adaptation of the MDR1-ABT, and features hands-free calling with echo cancellation. There’s also an NFC chip to make pairing the headphones to your device easier, and a touch-sensitive earpad allows you to contorl music without pulling out your handset or MP3 player.

There’s no word on price yet, but don’t expect these to come cheap. The original ZX1 retailed for around $700 (although it never officially made its way to the US), so we can only assume the ZX2 will follow in its footsteps. This Walkman is for audiophiles only.

Read next: The F 015 'Luxury in Motion' is how Mercedes-Benz envisions the future of connected cars