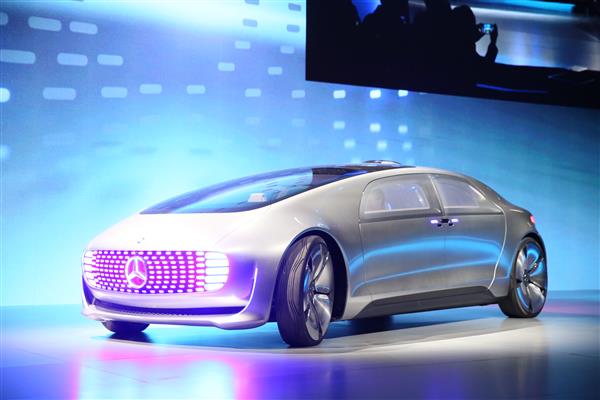 In its 2015 CES keynote tonight, Head of Mercedes-Benz Dr. Dieter Zetsche (more commonly known as Dr. Z) unveiled the company’s concept car of the future: the F 015 ‘Luxury in Motion.’ And it is chock-full of gorgeous futuristic concepts.

The “connected car” is more than just one that reads your text messages and driving directions; the introduction of Google’s self-driving car has had automotive makers thinking about the future of personal vehicles. With the F 015, Mercedes-Benz likens the self-driving car to the evolution of the horse carriage, where interior seats can swivel to face each other for optionally social purposes as the car transports the party to their intended destination. Passengers have control over where they’d like to go and any one of the riders can take over driving manually if needed.

Like a horse carriage, Dr. Z also says the car will always know where to go, just like the horse knows how to return to its barn.

The F 015 sports a sleek, silver carbon fiber body that looks extremely fluid, with changing LED light colors to indicate self-driving versus manual modes. These front LEDs can also project a light path for pedestrians to let them know it’s safe to cross in front of the vehicle.

Other than lights, the F 015 also has a bevy of sensors and radars to detect nearby motion. Dr. Z says it is important for autonomous vehicles to not only be safe for passengers, but the environment in which it operates as well.

Touchscreens are not only built-in to the dash of the car, they’re also embedded in the door panels, allowing passengers to set window privacy from within the car and other interior settings like music and temperature. But of course, this is a car of the future after all, so it will already know what the temperature is like at any given moment and adjust to your taste. Alternatively, riders can preset the temperature from their smartphone.

From a location-based standpoint, the car will also have a self-parking mode and “Extended Sense” mode where it can locate the owner of the car by finding his or her smartphone – a similar idea to dongles that help you locate frequently misplaced items.

Although Mercedes-Benz did drive a svelte prototype onto the stage, this is all just purely concept and is unlikely for the F 015 to ever make it to market any time soon. But this is what’s fun about technology: Envisioning a future of innovation and watching dream-like imaginations come closer to reality.

If this is what the future looks like, we can’t wait for a ride.