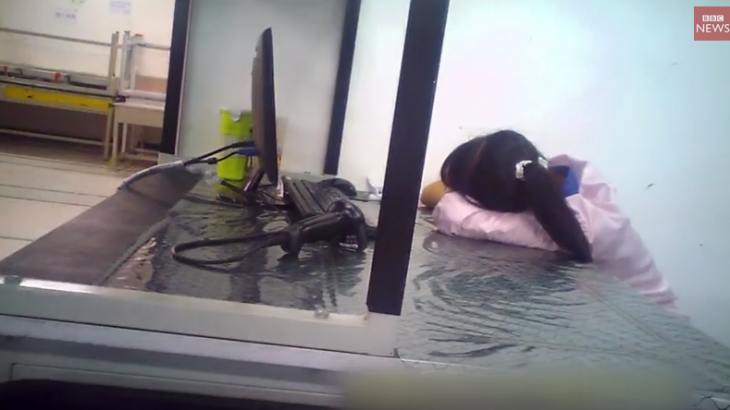 A BBC investigation into working conditions in Apple’s iPhone factories in China has unveiled poor conditions, despite the company’s claims to the contrary.

For the BBC’s piece, a reporter was sent in to work undercover and film working conditions. The video uncovers workers that are forced to work without breaks and for days on end without a day off. The undercover reporter said that they were required to do 18 days straight with no day off.

This isn’t the first time that Apple’s come under fire for poor factory conditions. A report in 2012 revealed suicides, rioting and endless other issues in Foxconn factories in China where Apple products were produced. It later emerged that the factory had installed suicide nets to deal with the problem.

Following media pressure, Apple started doing regular supplier audit reports, which it publishes online for anyone to review. Apple keeps track of worker hours, offers education on their rights and more. Despite this progress, distressing scenes like the ones above still emerge.

It’s easy to forget the human element behind making your shiny new gadget and getting it to your house within just 24 hours, but today’s revelations show just how hard it is to get that right.

Apple’s efforts to push suppliers into treating workers better is unique and shouldn’t be discounted here; many other companies simply don’t comment on such matters or make any effort to improve conditions. The company previously fired a supplier for not complying with its requirements on human rights.

Many of these suppliers are working to cut costs or meet extremely high order demand after new products are introduced and are cutting corners where they obviously shouldn’t.

I highly doubt that this factory is operating like this with Apple’s knowledge or consent. The company’s stance on these matters is extremely clear and I’d expect that Apple will come out with a response to the BBC’s investigation that it’s putting pressure on the supplier. It’s just a shame Apple’s contracts didn’t manage to prevent this situation already.

Despite Apple’s efforts in these areas, I don’t think it’s necessarily the company’s responsibility to deal with each situation like this. Apple is not the government; it simply holds a contract with a foreign company that has its own laws and customs. Apple may be pushing to improve conditions, but it’s ultimately the government that needs to take action.

This isn’t to discount the issues shown in the video above; these are human beings and they should be treated humanely. Apple has a responsibility to set the standard for human rights as best it can. I hope that they’ll make that clear, again.

Read next: Saatchi Art's "View in a Room" feature lets you visualize how art will look in your home