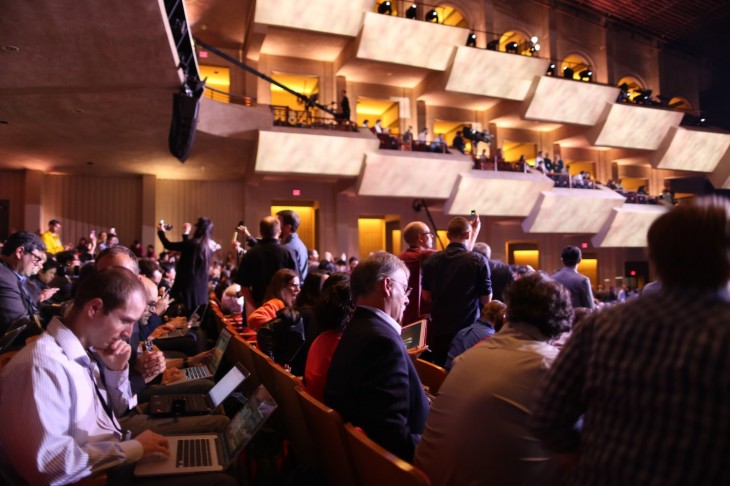 As the San Francisco reporter for The Next Web, I attend a lot of events. Sometimes multiple events in a single day. From keynotes, to fireside chats, to demo days, to roundtables about apps and market penetration, they all want the press to be there covering the onstage antics.

But, not all events are created equal. While some make coverage a relatively painless process, others seem determined to make writing about an event mind-numbingly difficult. The end result is instead of multiple well-reasoned articles, there’s usually one, maybe two articles hastily posted to sites while journalists mumble obscenities under their breath.

Most journalists are pretty adept at covering events under less-than-ideal situations. It’s actually our job. But why invite someone to write about your stuff then make it difficult to do that. Here a few ways you can make your event journalist friendly.

A schedule of the day’s events that includes when each speaker takes the stage or when each event starts is mandatory. We all have tight schedules and don’t have time to sit through agenda items that have no bearing on our beats.

Also, it feels sneaky when you don’t give us anything more than a list of speakers with no idea when each one will take the stage. It’s like you’re trying to trick us into writing about people our readers don’t care about. We don’t, instead we field questions from our editors asking us what the hell is going on and why we’re listening to someone drone on about business-to-business social networks.

If your event has hundreds or even thousands of attendees and you throw the press on that same network they’re using, the assembled press will not be able to file articles. Some will have their own Mi-Fi, but a majority of them depend on an event’s Wi-FI access to actually get work done.

Just get the IT person to set aside a separate network with its own dedicated bandwidth allotment and put a password on it.

Or better yet, offer wired network access. Throw a few hubs out there in the press area with ethernet cables. Sure the MacBook Air owners without the USB-to-ethernet adapter won’t be able to utilize them, but others will (Side note: If you’re a reporter and you don’t have this adapter, get it). Journalists will be happy to be able to get online without fear of dropping Wi-Fi and it’ll lessen the load on the Wi-Fi network for the rest of the attendees.

If the event is going to last a maximum of 90 minutes, you don’t really need to put out power strips. But once it hits it goes pass that mark, put out some power strips. Covering events is a huge battery suck thanks to browsers and photo editing.

If you have an all-day event with 20 minute breaks every two hours, you really need power strips or you’re going to get a series of tweets from a journalist’s personal account about your last event or speaker instead of an article.

Have you ever seen a photo of journalists working a keynote? We’re all hunched over furiously typing on notebooks precariously stationed on our laps. Some of us are taking photos with cameras tethered to those laptops. It’s an ergonomic nightmare.

Tables get the notebooks out of the laps and onto a flat surface when means we can type faster and give photographers something they can brace against so that photos of your CEO aren’t a blurry mess.

Reserved seating near the front

This is mostly for journalists that double as photographers which is about 70 percent of us. Some events want journalists to use the company’s photos of the event. They hired a professional photographer to make everyone on stage look outstanding.

That would be great, but I’ve never been to an event where those beautiful photos are available while I’m actually filing articles. Usually they appear about an hour after they are needed. those photographs come in handy at the end of the day, but when you’re breaking news, you don’t have time to wait around for the photographer to import and upload photos at their leisure.

Coffee is key. It’s a scientific fact that reporters are 80 percent caffeine during their waking hours. Energy drinks are nice too. But Coffee, definitely have coffee available.

If it’s an all day event, have a press room with Internet access. I’ve actually been to conferences where the press room doesn’t have access to the Internet or power. It’s less of a press room and more of a room to go and contemplate why someone would pull such a cruel hoax.

These are also the conferences where the press people are emailing me every day hoping that I’ll attend.

Make no mistake, these tips make our lives easier and truthfully you don’t have to implement any of them. If we see or hear something of interest we’d write about it even if you made us sit on the floor and use dial-up modems to file articles. But the reality is, we do a job based on the tools we’re given. If those tools help us rather than hinder, there are going to be better articles coming out of your event.

Read next: Uber has 'taken disciplinary actions' against general manager for privacy violations