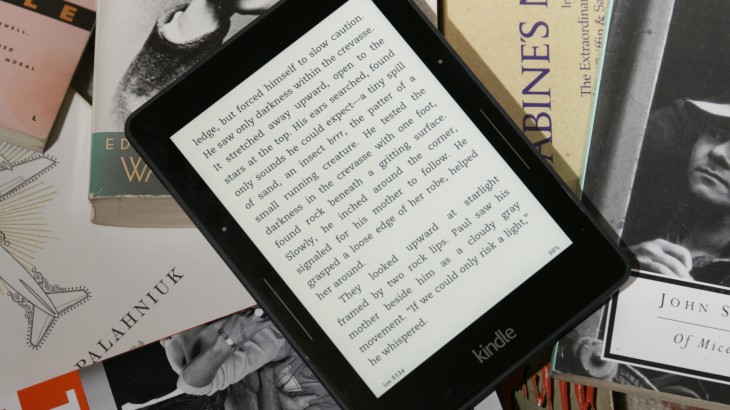 Amazon doesn’t have to make a great ereader. It’s really the ecosystem that makes an ereader worth purchasing and the Kindle line is the virtual hardcover wrapped in the online retailer’s shiny book-jacket services.

Amazon doesn’t have to make a great Kindle ereader, but it does anyway.

The new Kindle Voyage replaces the Kindle Paperwhite as Amazon’s top of the line ereader. The Paperwhite is still around with a starting price of $119 (with Wi-Fi and special offers which means ads on the lock screen). For most people who want an ereader that lights up, it’s the Kindle to get. For bibliophiles that want the luxury German sedan of ereaders, there’s the Voyage.

The 300 ppi display is crisp and a delight to behold during marathon reading sessions. Comparing it side-by-side to the Paperwhite with its 212 ppi display, is like comparing a Retina display iPhone with a pre-Retina display. The contrast on the Voyage has been bumped up as well. In addition to sharper text, images pop thanks to the higher resolution and contrast. Anyone who reads comics and manga on a Kindle will immediately notice the difference.

The Voyage uses the same front-lit technology to make the screen glow. The higher contrast display makes the light seem brighter at its highest setting. You’d only need this brightest option on the sunniest of days, but the new adaptive lighting feature means you may never have to manually adjust the brightness again. Once turned on, I tested the feature by reading in a pitch black room and then outside in the sun. In both instances, the Voyage set the brightness appropriately.

The adaptive lighting feature also slowly lowers the brightness of the display when you’re reading in a dark room. It’s a subtle change, but it kept me front reaching for the brightness setting after 20 minutes of reading in the dark.

Finally, Amazon was able to completely eliminate the source-light blossoming at the bottom of the screen. The Paperwhite made the blossoming difficult to detect, the Voyage removed it all together.

The Voyage takes design cues from the Kindle Fire line introduced in 2013. The biggest change is that the display is completely flush with the rest of the case, and next to display is something I’ve been wanting to return to high-end ereaders – page turn buttons.

The pressure sensitive buttons on both sides of the display let you page forward and backward with your thumb. The haptic feedback and pressure needed to initiate a page turn are adjustable. If you’re someone who reads on a bus where your jostled about, you’d probably want to up the pressure needed to flip a page and increase the feedback. If you do most your reading in the comfort of your home, you would probably adjust both settings accordingly. Of course, you can still initiate page turns via the touchscreen. But for anyone that misses just squeezing a button to turn a page instead of moving your thumb off the bezel to the display, this is a solid return of the feature.

In addition to more page-turning options, the Voyage is smaller than the Paperwhite. It’s 7.6 mm thick compared to the 9.1 mm and is slightly shorter and thinner at 162 mm x 115 mm versus the girth of the Paperwhite 169 mm x 117 mm. There’s also a 26 gram weight difference (27 gram for the 3G version) between the two models. The Voyage takes up a little bit less space in your bag or large pocket, but it’s the weight savings that I found the most compelling since I put ereaders in my pocket while traveling or commuting.

The back is slightly angled-at-the-edges, with the power/unlock button relocated from the bottom of the device to the rear right. The texture of the rear could use a bit more tackiness to reduce the chance of dropping the device.

This is where Amazon shines. The tight integration between the Voyage and the retailer’s robust Kindle store and offerings are possible because the company doesn’t have to worry about apps, cameras or platforms. The Kindle Fire and Fire Phone need to play nice with other systems and a bevy of apps. The Voyage and other Kindle ereaders have to do one thing well, give readers access to thousands of books at all times. The biggest feature of the Voyage is the biggest feature of the Paperwhite and $79 Kindle: Amazon.

That said, the X-Ray feature still makes epics like Game of Thrones more manageable with instant access to information about characters and definitions. Goodreads integration lets you see what your friends are reading, Whispersync lets you pick up where you left off in a book from any Kindle or device with the Kindle app, and for families with multiple accounts, Family Library will allow you to read each other’s books.

There’s also Kindle FreeTime Unlimited with access to an all-you-can-eat buffet of children’s books for the FreeTime feature already available on the Kindle ereader line. Unfortunately some of these features won’t be available until later in the year.

If you’re an avid reader looking for a new ereader, this is what your eyes want you to spend your money on. The screen is sublime and the page-flipping buttons are a feature some (including myself) having been clamoring for on a high-end ereader. But, if you already have any version of the Paperwhite, you don’t need to upgrade.

The Kindle Voyage is available for pre-order now starting at $199 for the Wi-Fi version. The 3G/Wi-Fi version is $269 with special offers. For an additional $20 (for both configurations) you can get a Voyage without ads on the lock screen.

Read next: Fab CEO: We were spending $14 million per month before Hem pivot