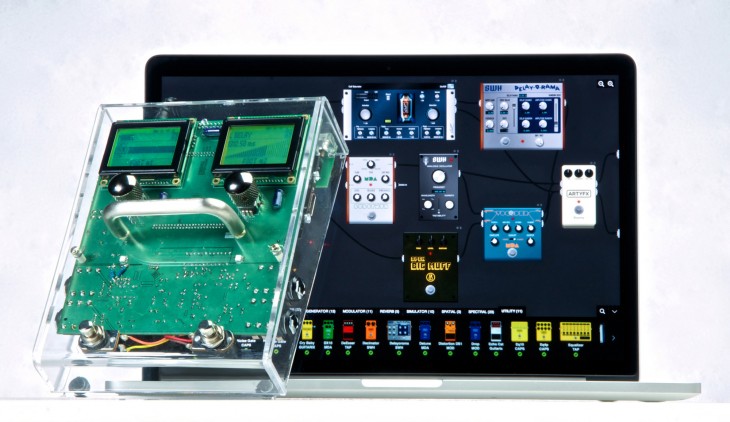 Digital guitar pedals can be great. They offer a huge range of sounds via various pedals and that’s sort of the problem. They’re digital, but you’re only getting (if you’re lucky) a few effects. The MOD Duo digital pedal uses an open platform to offer you as many effects as the community can build.

The MOD Duo pedal still looks and acts like your average guitar pedal on stage with buttons you can mash with your feet while rocking. But underneath all the mashing lies an ARM processor-powered circuit board built specifically for audio. It has two quarter-inch audio inputs and two quarter-inch audio outputs, plus it supports MIDI.  And that audio can simulate anything almost anything.

The MOD Duo, like the MOD Quadra pedal before it, uses open standard LV2 plugins. The standard already has a large developer following and because of that, the effects pedal isn’t limited to guitars.


The MOD Duo interface resembles a real-life linking of pedals and amps via cables.

In addition to the expected distortion, phaser and echo effects available, there are delays, synthesizer clones (like the Moog) and even sequencers. All of these effects can be linked together via an HTML interface that can be accessed via a browser, tablet or smartphone.

While setting up amp and pedal configurations, users can also set the hardware buttons and knobs to whatever parameter you choose. There’s also an expression pedal that’s sold separately that resembles a Wah pedal that can be used to configured to any variable in an pedal plugin.

The MOD Duo Kickstarter goes live tomorrow and offers the pedal for $299 for early birds that back the campaign, $100 cheaper than the when the pedal goes on sale to the public. Also the clear case will replaced by a metal case that’s more in line with guitar pedals.

Read next: Automatic partners with Ford to add Siri and IFTTT support to SYNC-equipped cars