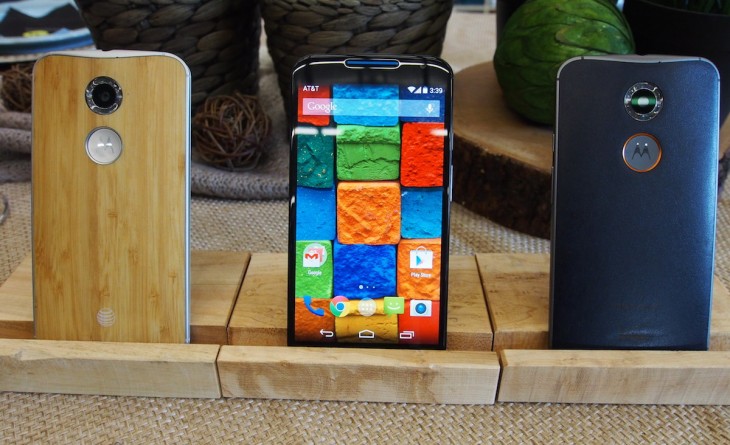 The second-generation Moto X comes with a 5.2-inch Full HD AMOLED display, Qualcomm Snapdragon 801 processor and a 13 MP rear facing camera with a ring flash which wraps around the lens instead of being situated off to the sides. It will be available in a 16GB or 32GB model. Despite the extra screen space, the new Moto X is just five grams heavier than its predecessor, weighing in at 144 grams.

The Moto X has always been about being fashionable, and customization continues to take the front seat. The smartphone now features an aluminum metal frame with 25 different back casing colors, including four wood and four leather options.

In addition to hardware customizations, the new Moto X adds more flexibility when it comes to voice command features. Instead of saying the prompt, “OK Google,” you can now name your phone whatever you’d like. In our demo with Motorola, we heard everything from “Listen up, Hakuna Matata,” to “OK, buddy” to activate voice command.

The Moto X is also even more contextual in combination with the company’s proprietary Moto Assist feature which lets you set physical parameters to enable functions on the device in various real life settings. For example, if the Moto X recognizes you are in your office, it can automatically go into silent mode. Motorola says it can set the device’s pedometer and microphone to also recognize when you are driving, so it can switch to driving mode to help keep the user safe on the road.

Additionally, you can put the Moto X in sleep mode just by saying “Goodnight.” When you wake up, simply say “Good morning,” and the phone will automatically come out of sleep mode. The Moto Action feature allows you to wave over the phone’s screen to silence alarm clocks or dismiss calls.

Moto Display lets you “peek” at notifications so you don’t have to unlock your phone every time you want to check on incoming alerts. By waving over the screen, you can check the time and notifications center. If you have a message and want to “peek” at the alerts, holding the icon down reveals the message received. To enter full functionality, just drag the icon over to unlock.

The Moto X’s camera bumps the megapixels up from 10MP to 13MP. The flash is now placed around the ring of the camera lens to provided balanced lighting, and can capture 4K videos with 4X digital zoom.

The camera software comes with a smart photo detection system which captures the frame a few seconds before you take the shot to help suggest better photos. This comes in handy during action shots when you need the timing just right.

Moto X’s gallery now comes with an automatic reel feature which groups picture events by learning when or where the images were captured. When you enter an event, a highlight video plays at the top. You can choose to customize the video before saving and sharing via email or social media.

The Moto X is available today in the US at $100 with contract (AT&T and Verizon). Additional accessories, such as the Moto Hint, an accompanying Bluetooth earpiece, and a turbo charger which can add eight hours of battery in just 15 minutes, will follow later this fall.

Read next: Moto 360 smartwatch is available today in the US for $250