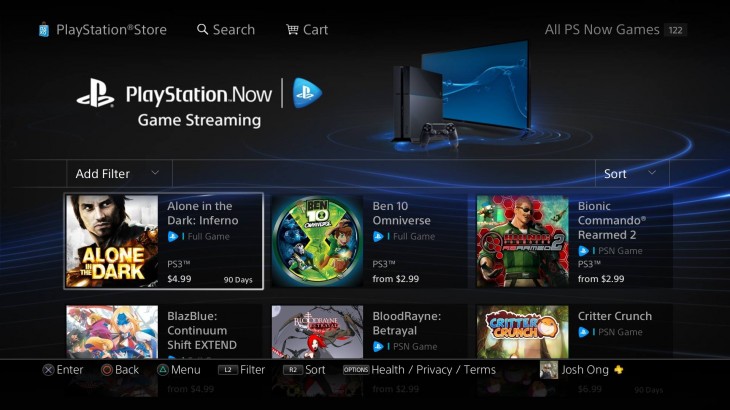 After Sony’s PlayStation Now cloud gaming service launched in open beta on the PlayStation 4 this week, we wanted to see if it lives up to expectations. The service does make it extremely easy to jump right in and play older PlayStation games, but the pricing model will need to be adjusted to really take off.

PS Now currently offers over 100 PS3 titles, with content from older systems expected to arrive down the road. Online multiplayer and co-op is supported, and you’ll be able to play against owners of the actual disc too. You won’t find all of your favorite last-gen games on PS Now just yet, but plenty of popular franchises, such as Final Fantasy and Metal Gear, are available.

While Sony has confirmed that it is working on a subscription option for PS Now, the service is rental-only at the moment. Rental periods available are 4 hours, 7 days, 30 days and 90 days. Cheaper games can cost you just a few dollars for the full 90-day period, but a big-budget title like F1 2013 costs as much as $49.99 to rent. That’s absurd, considering you could buy the game outright for less than that.

You’ll need a solid broadband connection, roughly 5 Mbps or better, to get going with PS Now. Sony recommends that you have a wired connection, but it worked fine for me over Wi-Fi. My home connection averages 16 Mbps, and games ran without any trouble.

Loading times aren’t bad. In some cases, they’re faster than loading off the disc. The service would occasionally hang while booting or closing a game, but hopefully Sony will resolve that before the general release. Gameplay also felt sluggish at times, especially when playing online, but it was usually manageable.

I did run into one instance where a game crashed in the middle of a level and I lost all my progress. I’ll give Sony the benefit of the doubt and chalk that up to beta status. But if unresolved, even the smallest reliability issues could leave PS Now dead in the water when it launches.

When it’s working properly, PS Now makes it pretty easy to forget that you’re gaming in the cloud. There are some quirks, though. If you’re inactive for too long on a game, Sony will log you out in order to free up the service. Also, since you’re playing PS3 games on a PS4 controller, you’ll have to use the touchpad as the select and start buttons. It’s not a big deal, but it takes some getting used to.

From our short time with the PS Now beta, we’re fairly confident that Sony can make the technology work once it’s finished with a last bit of polishing. Playing PS3 games on a PS4 isn’t much of a value proposition, though, since most PS4 owners probably own a last-gen console. The real vision behind cloud gaming goes beyond consoles.  Streaming games to a smart TV, the PS Vita, a tablet or a smartphone is when things will really get interesting.

As it stands, PS Now is an impressive concept with extraordinary potential. Cloud gaming is coming, and Sony is leading the charge. We’d need to see prices come down quite a bit for us to get regular use out of it, but a subscription service with rotating access to classic PlayStation games across a range of devices would have us reaching for our wallets in a heartbeat.

Related: From cloud gaming to VR, Sony is poised to own the full-stack of the future of entertainment

Read next: You can now legally unlock your phone in the United States