Wine crowdfunding platform NakedWines has begun testing same-day delivery for orders in San Francisco. Customers will need to place their orders by 1pm Monday through Friday to take advantage of the expedited shipping.

If you’re not familiar with NakedWines, the firm has established itself with an innovative distribution model in an industry that tends to prefer more of a vintage approach. The company collects money from customers, which it calls angels, and then uses the capital to fund quality independent winemakers and gain exclusive access to their product. In a sense, it’s a Kickstarter for good wine.

Members commit to putting $40 a month into their NakedWines account. When they’re ready to order, they simply spend their credits. If they don’t like a wine, they can fill out a form for a full refund on a bottle. NakedWines boasts roughly 220,000 angels, so it’s looking at cash flow of roughly $100 million per year.

At least for now, there’s no extra charge for the same-day delivery. NakedWines offers free shipping on orders over $100. Bottles are shipped in packs of six, 12 or 15.

For those not in San Francisco who still need your wines in a hurry, NakedWines is looking into expanding the service to other cities, such as LA, New York, Chicago, London and Sydney, if the experiment proves successful. Unfortunately for most international customers, NakedWines only ships to the US, UK and Australia at the moment. 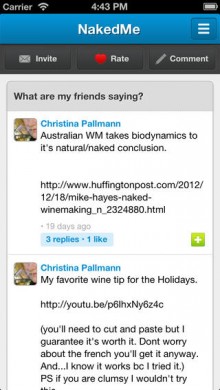 If you’ve ever bought a bottle of wine at a restaurant, you know that mark-up in the industry can get pretty steep. Wineries, distributors and retailers all need to take a cut, so the extra money you spend doesn’t always go toward a better drinking experience.

NakedWines aims to sell bottles for between $10-15 each while maintaining the type of quality that you’d get from a wine in the $30-40 range. Meanwhile, the winemakers benefit from having their names directly on the label instead of remaining behind the scenes at a big winery.

Backing a winemaker typically takes roughly a year for the new wine to become available on the website, though sometimes it can take just months if the winemaker is later in the process and operates a winery.

NakedWines uses a customer rating system to decide whether to work with a winemaker a second time. The company also keeps a bounty list where angels can vote for winemakers they’d like to see backed.

According to NakedWines COO Benoit Vialle, winemakers have more freedom to experiment with their technique on the platform. If customers don’t like the results, they can provide instant feedback and the winemaker can adjust next year.  For instance, one winemaker recently tried to make his pinot grigio sweeter, but went back to a drier version based on the reaction from angels.

While the program may sound intimidating, NakedWines doesn’t view its product as just for wine experts.

“We really cater to an audience that tends to be younger than the average wine drinker, not wine snobs, as we call them,” Vialle said. “For the most part, the angel base is people who like good wine but don’t want to spend a lot.”

Interestingly, NakedWines is open to expanding its model to other artisanal products. The juice branding is already taken, but I’d certainly be interested in seeing a NakedCheeses to pair with all those wines.

“There’s no reason why putting the individual producer in touch with a large audience and allowing them to buy direct from the producer couldn’t go across a variety of different product categories for sure,” Vialle said.

Read next: 5 strategies behind awesome customer service on social media