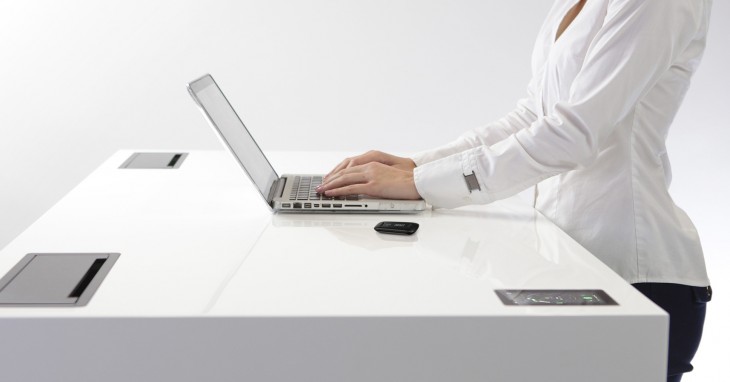 Remember the Stir Kinetic Desk, the WiFi-enabled smart desk that costs a mere $3,890? Well, from today it also integrates with your Fitbit account.

While the four-thousand-dollar pricetag is too punchy for most people to even dream about procuring, it does do some cool stuff. There’s real science behind the benefits of standing up while working for starters, but the Stir Connect Desk goes far beyond that – it learns and adjusts automatically to your preferences, and suggests times when you’re likely to stand or change positions. It also has a built-in touchscreen, letting you switch between sitting and standing positions easily.

Interestingly, it also has built-in health-tracking software that reveals key data on calories burned, and time spent standing vs. sitting. As we noted at the time, the Bluetooth and WiFi means that the deskis able to pair up with other health apps and devices. And today, that’s exactly what’s happening.

Stir has announced integration with fitness-tracking platform Fitbit (previous coverage), including the Fitbit Flex, Fitbit One and Fitbit Zip wearables.

For Fitbit devices with screens (e.g. the Fitbit One and the Fitbit Zip), calories burned data will be displayed on the device itself. And we’re told that in time, data from Fitbit devices, including steps taken, distance traveled and active minutes, will be viewable on the Stir Kinetic Desk’s built-in touchscreen.

Stir’s founder and CEO, J.P. Labrosse, was part of the original iPod team at Apple, and sold his previous startup, RayTracker, to First Solar back in 2011.

Read next: Rebelmouse retools its Web and mobile apps with slicker design and new features for sharing content