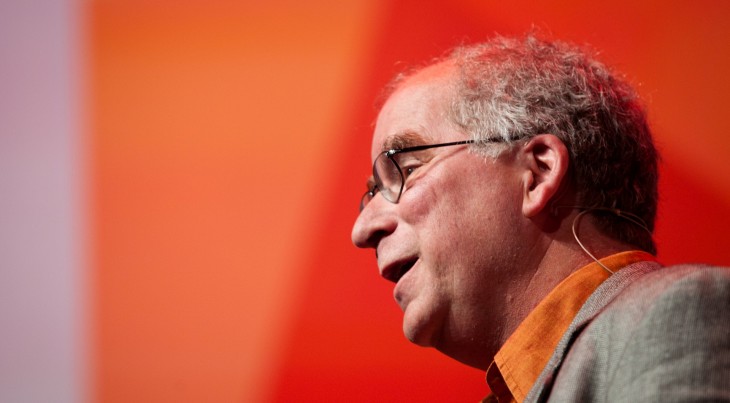 Brewster Kahle’s Internet Archive has been charting the Web’s evolution since 1996. Anyone wishing to return to the Yahoo of the mid-1990s or the Google of the early noughties merely has to punch the desired URL into the wonderful Wayback Machine, and boom. There it is, in all its (former) glory.

But the Internet Archive is much more than a visual public record of the Web of yore. It provides permanent storage of, and free public access to, collections of digitized materials, including websites, music, moving images, and around three million books.

Besides the gargantuan digital repository, however, Kahle was also the chief engineer responsible for the Connection Machine, and developed WAIS, one of the Internet’s first publishing and search systems prior to the World Wide Web.

At the TNW Europe Conference in Amsterdam yesterday, Kahle was in the house to discuss how the Internet has evolved a myriad of non-profits that are “more than trade groups”, serving as major players on this thing we call the Internet. These include the likes of the Wikimedia Foundation, Mozilla Foundation and Linux Foundation, as well as the Internet Archive itself.

While much of his discussion centered on the subject of how ‘open source’ is well suited to the Internet, Kahle discussed some of his more recent initiatives. And one of these things relates to housing.

The Internet Archive garners around $12m a year from donations and such like, with much of the money ultimately going towards this commodity called ‘people’. And what’s the number one thing these people need money for? Yup, you guessed it – housing.

“It’s not just in San Francisco, which is kind of a problem, but across the country people are spending between 30% and 60% of their income on housing, either through ownership or renting,” explains Kahle. “And the poorer you are, the closer that figure is to 60%. Why does housing cost so much? It turns out that it’s related to debt-service on the housing. If you are paying rent, two-thirds of the rent is for debt, for example the debt of the owner. But the underlying cost of the building is very low. It’s only about one-third of market-based rent. With debt-free housing, we could have it so the Internet Archive doesn’t have to raise as much money. Because we wouldn’t be raising money to pay it to people, to pay it to a bank. I don’t want to help banks. So how can we make debt-free housing?”

It’s an interesting idea for sure, one that’s perhaps akin to the social- or public-housing structure that’s prevalent in many parts of Europe – paid-for or subsidized housing for people to live-in. It’s also a similar idea to what exists within some sectors – for example hospitals or churches often own accommodation for workers to live in.

In Kahle’s case, it’s all about the non-profits. He’s set up a separate organization called the Kahle-Austin Foundation House, which currently owns a single apartment building in San Francisco. It will serve as an experiment of sorts, and will have two distinct kinds of occupiers – market-based rentals for normal San Franciscans (the properly has residents living there already), and cost-based licensees that work at around 30% of the typical market-rent. These will include Internet Archive employees, as well as other select non-profits.

In a nutshell, they’re exploring whether they can use the principles of open source software to build licenses to perpetuate something that the market would otherwise destroy, and they’ve implemented a community-license so the building can’t be sold again. “It sort of permanently pulls it out of the market,” he says.

“I think we can start to build towards free and open societies, by building on some of the ideas that have come out of our community that are actually very successful,” says Kahle. “Ones that can support our families, can do things that last by building communities, by using licenses to help define how our world works within a law structure that is often not pursuing our aims or helping a broad set of people.”

It’s still early days for sure, but if it works and proves popular, the longer-term vision is to scale it out – and it shouldn’t take a lot of money to do so, relatively speaking of course. “If you buy an apartment building, and if you charge ‘market’ rent, it pays for the mortgage,” says Kahle. “So you can just wait. If you have a long-term viewpoint, and you have the licenses and structures to make sure it’s not sold and not put under new debt, within fifteen or twenty years, you’re effectively debt-free and it can remain debt-free forever. Most people say ‘that’s too long to wait‘, but fifteen years is not so bad.”

Bitcoin and the Internet Credit Union

Kahle has also founded the US-focused non-profit Internet Credit Union that has seen him have to learn about the finer intricacies of the financial industry. And he regaled an interesting-if-sobering story of the inherent resistance against the fledgling cryptocurrency revolution.

Kahle has been on board with Bitcoin for a few years already – the Internet Archive accepts it as donations, while staff can elect to receive part of their salary in the digital currency too. But when he opened up his credit union to Bitcoin transactions, things took a rather unpleasant turn for the worse.

“We love Bitcoin, but the Bitcoin companies are having trouble because banks are closing them out due to threats from the government,” says Kahle. “We opened two accounts for two different Bitcoin companies, and the auditors said we had to close those accounts for ‘those Bitcoiny people’. I love that. ‘Bitcoiny people’. They didn’t understand it. They changed things to ensure we closed those accounts within days, and they broke some of their own internal rules to make things happen very fast. They were highly motivated, so there is something going on within these financial systems to try to stomp out Bitcoin.”

With Bitcoin now out of the equation from the credit union perspective, Kahle and Co. are now having to take it a little slower, sticking to the traditional banking conduits for now. But he hasn’t ruled out trying to reintroduce some of these “newer ideas” in the future, when the powers-that-be are a little more ready for it.

Read next: Speak up: How to find your social media voice