I just had my mind literally blown by HBO’s “Ascend the Wall” Game of Thrones Oculus Rift exhibit at SXSW. I know what you’re thinking: “Josh, there’s no way it literally blew your mind,” but the installation used fans to create a wind effect, so, in my book, that counts as literal mind blowing.

The exhibit puts you inside of a physical replica of the elevator that takes the Night’s Watch up on top of the 700-foot ice wall that’s part of the Game of Thrones universe. Using the Oculus Rift virtual reality headset, headphones and 4D elements like physical shaking and faux-wind, you scale the wall and look out upon the area Beyond the Wall.

I’m still reeling from the experience. If I haven’t been clear enough, this is the future of entertainment and you are going to love it. The Metaverse is almost here, and we’re about to see how deep this rabbit hole goes.

There are, however, still a few gaps in the experience. Reaching out to the elevator adds an element of touch, but your brain still has some cognitive dissonance because your arms aren’t registering on the Oculus display.

If you’re not at SXSW, you still have a shot at experiencing Ascend the Wall during HBO’s world tour for the exhibition. Stops are planned for Rio de Janeiro, Oslo, Toronto and even Belfast, where the show is filmed. Since the experience doesn’t rely on text, it should translate well internationally.

We asked Elana Loewenthal, HBO’s director of international marketing, whether we can expect more Oculus integrations for Game of Thrones content in the future, but she said that the network hasn’t talked about it yet. Still, considering the reception that this demo is getting, I’d expect HBO to continue to capitalize on it after Oculus Rift hits the market.

“Ascend the Wall” is amazingly immersive because it brings together the perfect combination of cutting edge technology, virtual effects and storytelling. HBO partnered with Framestore, the Academy Award-winning VFX company behind a little movie called Gravity, and experiential marketing agency Relevent.

HBO offered a virtual interaction at its Game of Thrones exhibition last year, but it decided to up the stakes this year by implementing Oculus Rift.

“This year we had targeted coming to South By and we know that our fans of Games of Thrones love immersive. A lot of them are gamers, into technology,” Loewenthal said. “We asked [Relevent] to present some concepts. This one overshadowed all of the other ones.”

Relevent Vice President of Ideation and Innovation Ian Cleary said that he knew the experience would be amazing once the team had honed in on recreating the ice wall elevator. 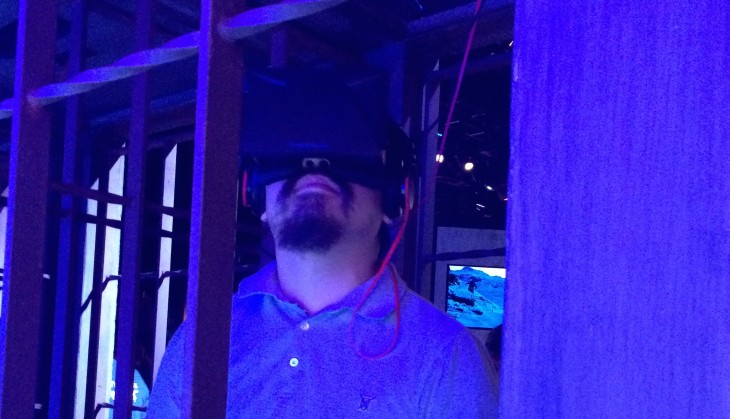 For her part, Loewenthal admitted that she was a little bit skeptical of the project at first. HBO, after all, keeps close control over its brand and how it markets its shows. However, when she saw how excited Game of Thrones producer Greg Spence was about working with Oculus Rift and realized that Framestore would provide the graphics, she became a believer.

“When [Spence] went on the set of Castle Black, he was telling everyone on set, he was talking about how excited he was,” Loewenthal noted.

The Castle Black set is a courtyard located inside of a quarry, where the rocks are sprayed white to look like an ice wall.

“It was dumb luck that I happened to meet with [Spence] the day they were filming Castle Black…He showed me around and it just so happened that this was the actual area that we were planning on creating for the actual exhibition,”

Cleary added that the team had some fear going into the project because of the pressure to live up to the standards that the Game of Thrones books and TV show have set.

“It’s the highest bar possible. You can’t let these things down,” he said, adding that his heart was in his chest when he showed an early version of the installation to show creator D.B. Weiss.

Framestore Director Mike Woods told TNW that he expects experiences like this to become common in the future.

“Oculus Rift itself is something we were desperate to do a proper project with…There’s a whole new storytelling language to learn,” he said. “We’re already discussing next projects. As people start to make storytelling organic for the rift, there’s no end to what you can do it.”

Even if you’re not a Game of Thrones fan, this kind of exhibit should get you excited. Oculus, like Winter, is coming, and it’s going to power the next generation of entertainment.

Read next: Tesla could be banned from selling its electric cars directly to customers in New Jersey