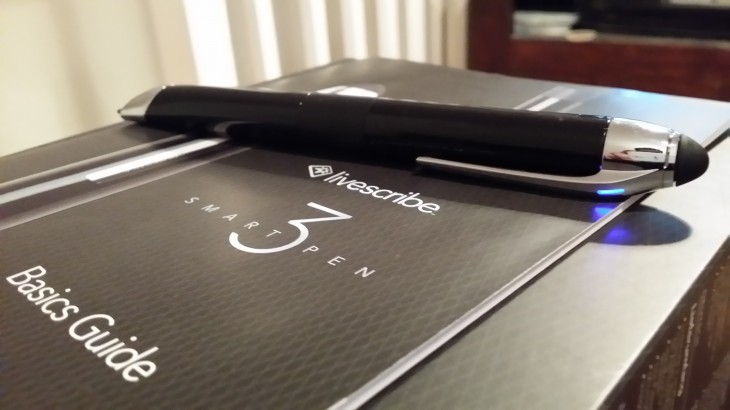 Being a journalist is no easy task: constant deadlines, briefings, phone calls and meetings can leave time a pretty scarce resource, so anything that might cut-down and ease the note-taking process is a welcomed thing indeed. Enter Livescribe.

The Livescribe 3 is the latest smartpen device to roll off the production lines of the Californian company, and this time around the fully-fledged smartpen doesn’t require connecting to a PC (like the Echo, for example) but it does require an iOS device. Delivering most of its functionality, there’s the Livescribe+ iOS app, which is a free download.

A spokeswoman for the company told me that an Android version is in the works, but couldn’t say exactly when in 2014 it is due to arrive.

With the potential promise of text-synced audio recording and never having to manually type up written notes ever again, I couldn’t help but take the Livescribe 3 for a road test.

It’s not just journalists that could make good use of the Livescribe 3 either. Students, teachers, anyone that has to sit in a meeting ever – there are plenty of situations where having a digital, shareable backup of your written notes could be useful.

Getting started with the Livescribe 3

It’s worth noting that not only will the Livescribe 3 only work with iOS devices (meaning Android, BlackBerry, Windows Phone and anyone else is left out in the cold), it’s also pretty fussy about which iOS devices it’ll work with too. I tried it with an iPhone 4, and an iPhone 5 that hadn’t been updated to iOS 7 – neither of which worked. I ended up testing it on an iPad mini running iOS 7, so if you’re tempted make sure you have an iPhone 4S or newer and are running iOS 7.

In the box, you have the Livescribe 3 pen itself – a chunky but light object that was easy and comfortable to hold in my man-mitts. People with smaller hands might find it a little on the large side, however. In the end of the pen is a replaceable standard ballpoint pen tip.

The middle section of the pen twists to switch it on (and off) and once successfully paired to your iDevice via Bluetooth it should show a solid blue color in normal operation. It shows red if you’re recording a voice note.

There’s also the Livescribe notepad, which you’ll need a supply of if you take a lot of notes – there’s 100 pages to get you started, but you’ll undoubtedly need to invest in more if you plan on using it a lot. Extra Livescribe notepads can be purchased from around $8.95, there are quite a few to choose from too. Alternatively, you can print your own for free.

On each page of the starter notepad included in the box, you’ll find controls for recording audio (record, pause and stop) as well as icons for starring, flagging or tagging notes. At the top of each page, you’ll find three numbered dots, which can be assigned to certain functions – I couldn’t get it to work, however. When I asked the company’s spokesperson, I was told these were designated for future functions.

Charging your Livescribe 3 is achieved via a micro USB port hidden beneath the cap in the top of the pen, and a cable is included in the box.

The Livescribe 3 offers a range of different functions, but at its core it transfers your handwritten notes into a digital format – you have the option of viewing them as-written, or converted to editable on-screen text.

Before going any further, it’s worth noting that my handwriting is terrible. I was told it throughout school many years ago, and it remains true. Ultimately, how neatly and quickly you write could well dictate your success with the Livescribe 3. While I won’t ever defend my handwriting, Livescribe certainly did manage to make it look a whole lot worse at points, adding lines and other marks that weren’t actually present on the paper. For example, in the image below, you can see that there are no lines joining “at the feed” or “the app”.

Over the years, I’ve become accustomed to being able to read my own scrawl, but it did take some effort to have to deliberately try to write more slowly and neatly as I knew I’d want to try to convert it to digital text. My first two attempts written at normal note-taking speed were virtually illegible and converted into complete jibberish.

However, that’s not to say the conversion doesn’t work – it does, it just needs to be pretty neatly written to do so. The result of those phantom marks being introduced in the digitized text (in the image above) meant that when it came to converting it into editable text, it mistranslated those parts (shown below), all the rest was fine though.

Via the Bluetooth connection to your device, the pen can also be used to take audio recordings which sync with the notes. To record, you can either hit the icon in the (open) Livescribe + app or tap the record icon on the paper.

If the app isn’t open on your device, when you tap record on the paper, a notification will pop up at the top of the screen. Tapping it will start the recording.

In my testing, the feature worked well, and seemed to pretty much sync up in time with the notes being taken. Tapping any part of a Pencast recording in the app will jump directly to the audio at the time that note was taken. As you’re listening back, the notes light up on screen to show where you are in the text, as shown below.

One other small issue worth noting: if you’re using Livescribe+ on an iPhone, you’ll need to remember to manually resume recording if you receive a call part-way through.

Using the Page, Feed and Pencast icons at the top of the screen, you can review your notes and recordings.

Page view shows you them as they appear in the notebook, in a scrolling, page-by-page list. Each physical notebook that you use is represented by a different notebook in the app, so you can keep track of everything easily – and there’s an integrated search function if you’re looking for something specific. You can, of course, jump directly to a specific page in a specific notebook, too.

The Feed in the middle is a list of all your notes too, but is the place where you can convert and edit them. For example, you can select multiple items, translate them to digital text, add an attachment and then email them on to someone else. Clicking ‘select’ in the top-right corner of the Feed allows you to edit, share or merge more than one item.

There’s also the option to tag, star or flag notes as well, if they’re of particular importance. These items can then be accessed in a list via the Livescribe+ app menu, shown below.

Via the app, you can also keep track of things like the battery charge status (shown below) and change other options and settings. If you forget to switch it off, it puts itself to sleep to save on the battery. Twisting the middle ring on the pen will rouse it into life again.

Notes that you’ve taken can be shared in PDF format via email, message and a variety of other services, like Dropbox, Evernote et al, provided you have them installed.

Voice notes that are integrated into these PDFs can only be played back by other people with the Livescribe+ app installed on their device.

At that price, it’s not going to break the bank, but it’s certainly a whole lot more expensive than a regular old Biro. For me, what it promises could be virtually invaluable in terms of time saved in not needing to transcribe notes. It could be, but it doesn’t quite manage it.

Perhaps my writing is just too messy for the Livescribe 3, but generally, if I was relying on this I’d need to do a lot of editing of the notes at the point they were taken – three months down the line, that completely random text is going to make even less sense and anything that adds time to my note-taking process isn’t really a welcome thing.

Ultimately, I found the Livescribe a useful addition for the odd task, but it does also impose a multi-device requirement for anything that you want to take notes of –  you’ll need the pen and your iPhone or iPad, and if you plan on recording audio, you better have it out next to you: it won’t record anything tucked away in your bag. On one occasion, I had intended to take notes with the pen, but found I’d left the notebook at home, despite remembering to take the iPad – so don’t forget that either.

However, if you can overlook the need to use specific Livescribe paper and don’t mind needing to have your phone/tablet with you simply to jot something down and your handwriting is neat enough , the device itself works well. As a bonus, the search functionality promises to get better as your virtual notepads (and real ones) fill up.

In some places, achieving things in the app is as simple as it should be – the multi-select options work well, for example, – but in others, like the tagging, it’ll take some refinement before it’s a truly useful tool.

For me, it just couldn’t quite cope with the combination of scrawling handwriting and a furious pace; the result was simply an illegible mess. So for now, I guess I’ll have to stick with a Biro and notebook.