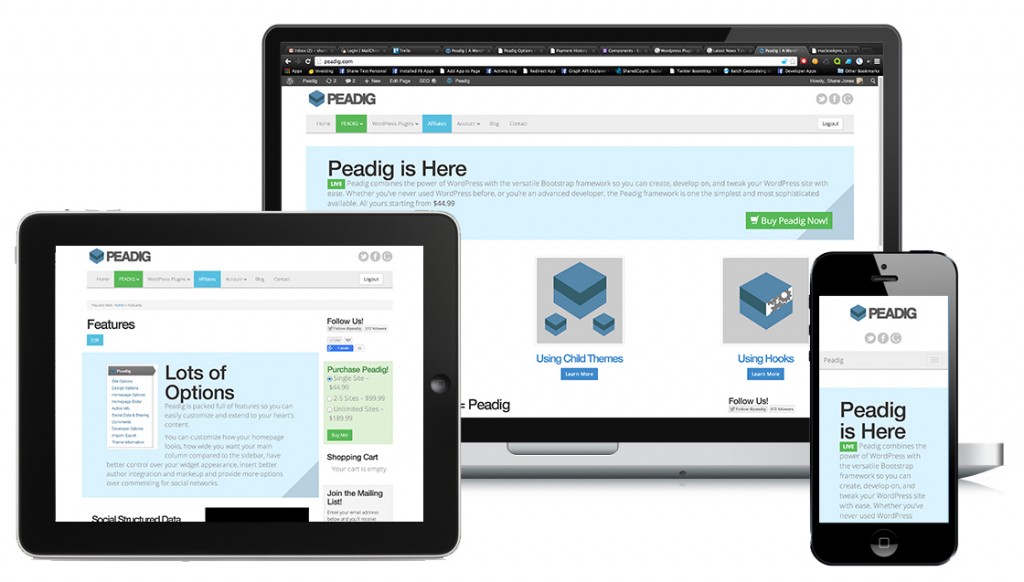 Co-founder Alex Moss calls it “the most extensive and up to date” framework available for Bootstrap, a development kit that reportedly powers 1% of the 150 million websites indexed by source-code search engine Meanpath.

It’s been designed from the ground up to help complete newbies such as myself (I’ve only ever set up a website using the Genesis WordPress theme framework) create and manage a site in 30 minutes flat.

“You could buy Peadig and essentially design the site how you want within half an hour,” Moss explains. “You could have the site up and running, mobile first responsive, everything it says on the tin really, in about half an hour. I can do it in about 10 minutes these days, but I know my way around it.”

Peadig respects the WordPress requirements for theme developers and also offers detailed social structured data. This means you can set a title, description and thumbnail for social networks such as Twitter, Facebook and Google+, while editing any post or page. In addition, authors can also link to their social profile pages and Peadig will automatically generate the HTML markup.

If writing code is still an incredibly overwhelming or laborious prospect, Peadig also offers a shortcode generator. This means that you can write a simplified version of what you really need in square brackets and Peadig will automatically generate all of the necessary HTML. “So you wouldn’t need to know much coding at all,” Moss adds. “Any coding really.”

Peadig isn’t the only WordPress theme framework based on Bootstrap right now though. Roots is a close competitor, although Moss argues that it’s nowhere near as versatile or extensive as his own offering. “All the ones that are out right now require developer experience to even work with it.”

And the name Peadig? It’s a contraction of the delectable treats known as peanut butter digestive biscuits, of course. We think Google and its confectionary-branded Android firmware updates would approve.